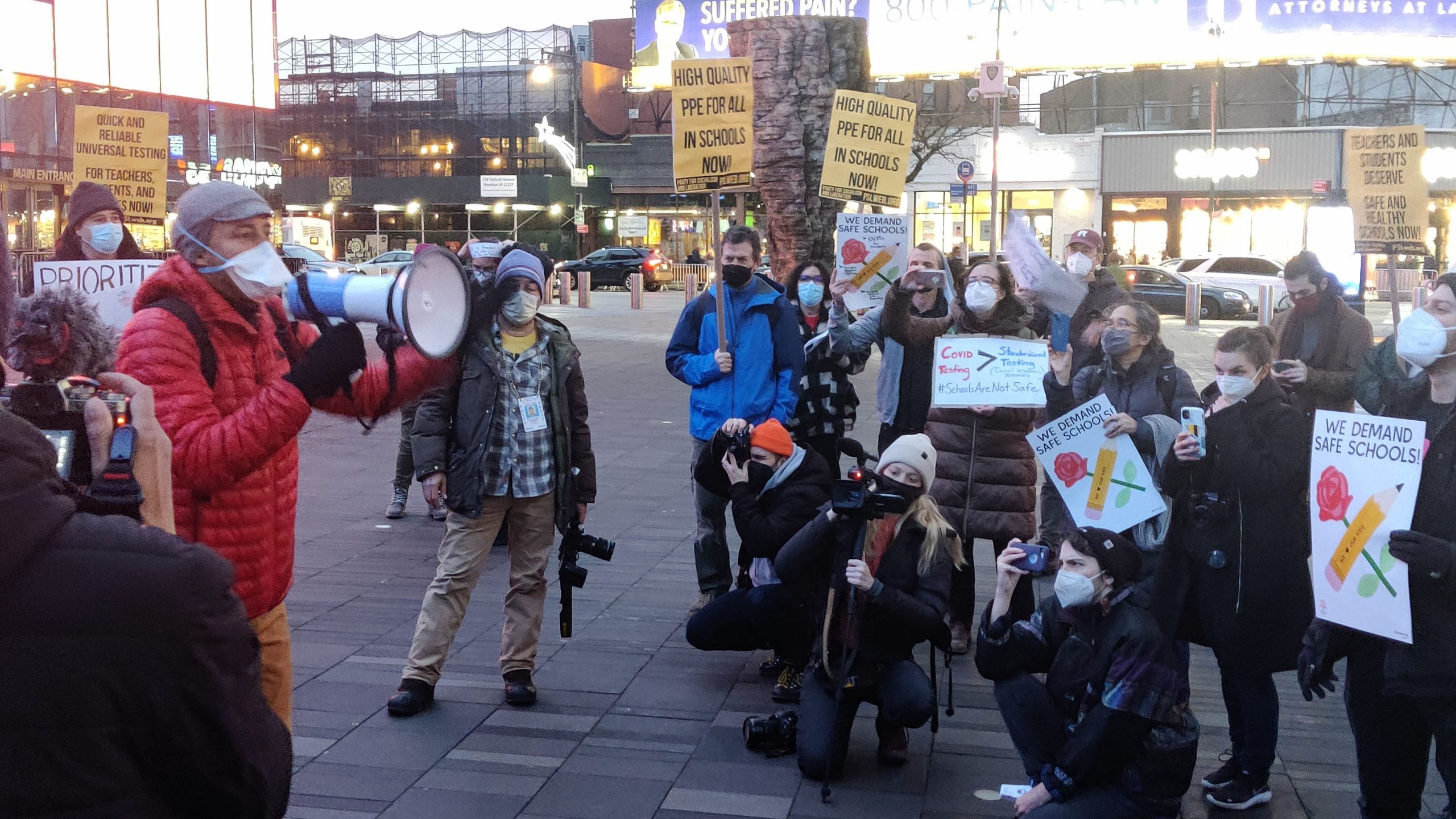 In New York City, around 200 public school teachers and community members rallied outside the Barclays Center on January 5 to demand safety measures as the COVID-19 positivity rate skyrockets. Organized by the MORE (Movement of Rank and File Educators) caucus of the NYC teacher’s union United Federation of Teachers (UFT), protestors demanded KN95 or N95 masks for all students, faculty and staff, weekly testing of all staff and students, repair or replacement of ventilation systems, excused student absences due to COVID surges and remote-learning options.

“All of my students know that I’m here right now,” said Adam, a Brooklyn public school teacher. “I showed them the flyer on the projector and I told them that this is the answer, it’s here. It’s not City Hall who keeps us safe.”

With almost a million students, the city has the largest public school system in the country. According to NYC Department of Education data, more than 14,000 students and staff at New York City schools tested positive for COVID since December 23, averaging 1,000 cases per day. Most recently, cases have jumped to over 2,000 on January 6th.

Adina Benno, a public school teacher in Brooklyn, told Monica Cruz, “We need the city to act now, and to act fast when executing safety plans. It’s not enough to say a safety plan will be in place. It must be actualized.”

She continued, “Many schools are barely receiving testing of 10% of staff and students, nowhere near the promised rate. Some schools had access to one N95 mask per week for staff, while many schools had none for the students.”

The increase in positive cases has had a direct impact on the staffing crisis and student absenteeism. Beeno explained that “the cases roll in each day and parents are increasingly keeping students home out of fear of school spread. As the access to testing increased this week, while rapid tests have been distributed to staff, the staff absentee rates continue to rise due to confirmed positive cases.”

She described the situation where she teaches, “At my school, the typical student absentee rate is less than 3%; at the beginning of the week it was over 30%. I imagine we’re getting close to 50% now.”

Despite this, new mayor Eric Adams has doubled down on his decision to keep schools open, echoing Center for Disease Control guidelines that it is possible to limit transmission during an outbreak with proper mitigation tactics. President Biden also insisted that schools should stay open.

Responding to Biden’s controversial statement that unvaccinated people are “looking at a winter of severe illness and death,” teacher Adina Benno told Monica Cruz, “I don’t understand how the White House can make this announcement in December, but then tell unvaccinated children that they’re safe in schools, with rising and spreading COVID cases.”

At the January 5 rally, public school teacher Adam explained the need to explain the failings of the government response to COVID in the classroom. “The Center for Disease Control is speaking for the ruling class, the most dangerous ruling class in the history of the world,” he stated, “so if they’re going to put us in these schools and trap us with each other, then we should take the solidarity of that moment to go to the core and teach the truth about this system that is killing us.”

New York’s teachers are not alone, public school teachers in cities and towns across the United States are also fighting for the health and safety of their students, school staff, and families. From San Francisco to Kentucky, teachers are reporting similar stories of personal protective equipment (PPE) shortages while a nationwide lack of substitute teachers is making it even more difficult for schools to make up for the shortage of teachers and staff who are sick and in quarantine.

Chicago teachers up ante of resistance

The Chicago Teachers Union (CTU) is currently negotiating a proposal with school administration, as rank and file teachers stand up to the city’s inadequate pandemic response. In an ongoing standoff, classes have been cancelled for a third day in a row as of Friday January 7. The union voted earlier this week to move to remote-only learning, but the city announced soon after that it would allow school administrators to decide if schools would go completely remote or not.

The Chicago Principals and Administrators Association, released a statement signed by over 100 principals and assistant principals in response to the city’s announcement stating: “This is a districtwide crisis and we need a districtwide strategy. It should not be an ad hoc reactionary response that creates inequities that are predictable among social and economic lines.”

These are two FedEx Drop Boxes on the Southwest Side, sites where CPS families are expected to leave completed COVID testing kits. Because boxes are overflowing, families are scrambling to find safe and secure places to leave their kits. The deadline for return is today. pic.twitter.com/DAzOn7RgSe

Chicago Public Schools (CPS) received criticism for its faulty handling of at-home tests distributed before the start of the new year. Pictures of FedEx drop boxes overflowing with completed test kits and piled up on sidewalks went viral online. CPS reported that nearly 70% of the nearly 40,000 completed tests were ruled invalid.

In 2021, during another surge of the virus in February, Chicago public schools for kindergarten through 8th grade were shut down for days while the CTU and city bargained. Mayor Lori Lightfoot threatened to lock teachers out of their remote teaching platforms if they refused to teach in-person. Both the mayor and the school administration insisted that the schools were safe, yet the city’s own data demonstrated a spike in infections among students and staff since in-person classes had begun in early January.

During the school shut down, CTU member and special education teacher Linda Perales told Monica Cruz, “During this pandemic, we need to stand strong as a union. We know that it is necessary to fight. We always have to fight for what our students deserve, what our teachers deserve, what our communities deserve.”

She continued, “So we must continue standing strong, continue working remotely and continue fighting until we get a safe reopening plan.”