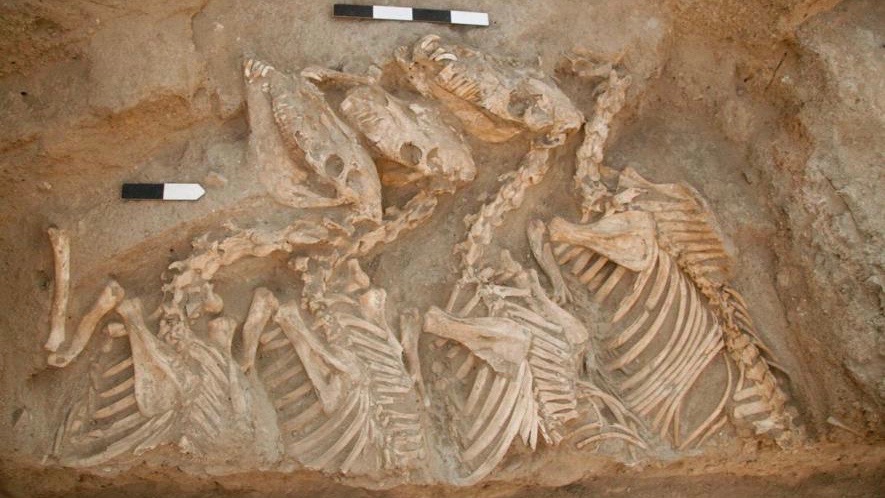 Animal Bones Excavated from Tell Umm el-Marra, Aleppo, Syria. Image taken from Science and is for representational use only.

Kungas don’t exist anymore, but their existence is mentioned in ancient Cuneiform scriptures and art. Four thousand five hundred years ago in ancient Mesopotamia, the Kunga was a starring animal of the Bronze age elites, much before horses arrived here. Archaeologists have suspected that the Kunga resulted from cross-breeding of some kind.

A latest analysis of ancient DNA has confirmed that Kungas indeed resulted from cross-breeding conducted by humans. A cross between a female donkey and a male Syrian wild ass, the Kunga has become the first known instance of human-engineered species. The research published in Science Advances on January 14 concluded that Kunga was a production far beyond the traditional processes of animal domestication by humans.

Eva-Maria Geigl, of the University of Paris and one of the authors of the study commented on the findings saying, “From the skeletons, we knew they were equids [horse-like animals], but they did not fit the measurements of donkeys, and they did not fit the measurements of Syrian wild asses. So they were somehow different, but it was not clear what the difference was.” The new research showed that Kungas were strong, fast, but sterile hybrid species.

As the Kungas were sterile animals, similar to many hybrid species like the mules, each of them were to be produced by cross-breeding between a domesticated female donkey with a wild ass, which was indeed a difficult task. The wild asses were stronger and could run faster than the donkeys. It was possible that even the Kungas were very difficult to tame, according to Geigl.

“They really bio-engineered these hybrids. There were the earliest hybrids ever, as far as we know, and they had to do that each time for each Kunga that was produced — so this explains why they were so valuable,” Geigl commented further. Ancient scriptures say that Kungas were a prized possession for their strength and fastness, and for this reason, they were expensive.

In the new study, the researchers analysed the bones excavated from a princely burial site, the Tell Umm el-Marra in Northern Syria, dated back to the early Bronze period between 3000 BC and 2000 BC. Tell Umm el-Marra is in Aleppo of Syria. The excavation site is thought to be the ruins of an ancient city named Tuba, which Egyptian inscriptions have mentioned.

The comparison of the genomes revealed that both the animals were members of the same species. However, the ancient wild ass was much larger, Giegl remarked. This suggests that the Syrian wild ass had become smaller in size gradually, pertaining to environmental pressures, for example, hunting.

The bones used in the new study were excavated by Jill Weber, a co-author and an archaeologist at the University of Pennsylvania, ten years ago. Weber had a view in the beginning that the animal remains excavated from Tell Umm el-Marra should be Kungas because their teeth showed the signs of putting harnesses, and patterns of wear showed that they had been fed purposefully, unlike leaving to graze like other donkeys.

Kungas could run faster than the horses, which made them a good choice for pulling war wagons, which probably continued even after domesticated horses were introduced in Mesopotamia, according to Geigl. However, after the death of the last Kunga, there had been no more interbreeding between donkey and wild ass to produce them, and a reason might be the domesticated horses, which were easier to breed, Giegl further explained.