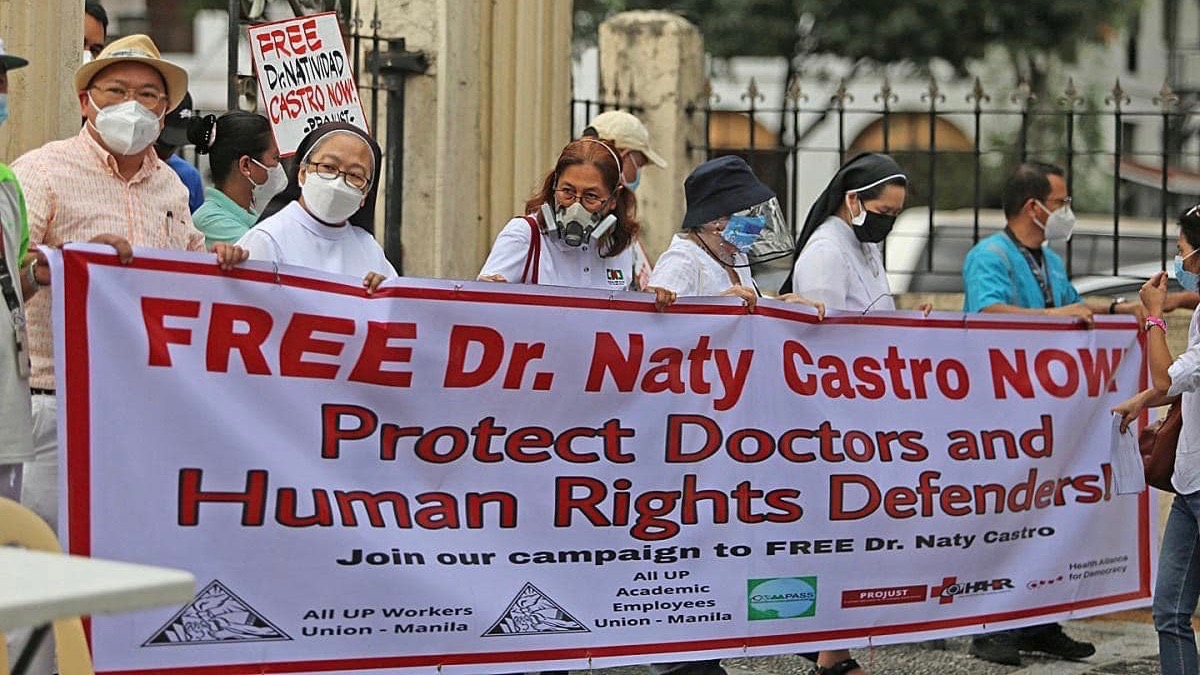 Demonstration outside University of the Philippines, Manila, held on February 21 to protest the arrest of rights advocate and community doctor Naty Castro. (Photo: All UP Academic Employees Union - Manila Chapter/Facebook)

As outrage grows in the Philippines following the arrest of social activist and doctor Naty Castro, the authorities are gearing up to implicate more people in the case. On Wednesday, February 23, human rights group Karapatan revealed that at least 31 individuals have been charged in the case of alleged kidnapping and illegal detention against Castro.

Maria Natividad Castro, more commonly known as Naty Castro or Doc Naty, is a rights activist. She is the former head of Karapatan and a doctor known for her work towards making health care services accessible to Indigenous communities and far-flung villages in the Agusan region in northern Mindanao.

She was arrested on February 18 and clandestinely flown from San Juan City in Manila to Agusan del Norte, around 1,200 kms away in southern Philippines, by the police. She is now detained at the Bayugan Police Station in Mindanao. She was charged with kidnapping and holding a unit of the government armed militia group captive. Almost 400 people are named in the case and warrants have been issued against many of them.

The police have also accused Castro of being a high-ranking member of the banned Communist Party of the Philippines (CPP) and its armed wing, the New People’s Army (NPA). Of the 31 people now charged in the case apart from Castro, 19 are members of the Indigenous rights groups Mapasu. Others include two radio journalists, two members of the peasant union Kilusang Magbubukid ng Pilipinas (KMP), three trade unionists from Kilusang Mayo Uno (KMU), and two members of the Gabriela Women’s Party, along with religious leaders in the south and members of groups working for education of Indigenous children.

A court trial on the charges is ongoing in the Bayugan City Regional Trial Court in the Mindanao region since 2018. The government’s anti-insurgency agency National Task Force to End Local Communist Armed Conflict (NTF-ELCAC) has repeatedly claimed that the groups implicated in the case are fronts of the CPP and NPA, but has not been able to substantiate such claims in court.

Social movements accuse the police of red-tagging activists like Castro, and have pointed out major procedural lapses in her arrest. The procedural lapses were also highlighted earlier this week by the rights watchdog Commission on Human Rights (CHR).

Among the issues raised by the CHR include the police not showing proper identification, denying Castro legal assistance for a prolonged period, and refusing to inform her family where she would be taken. The CHR also noted the red-tagging in the case and raised concerns that it sends a “chilling effect” not only to social workers and activists, but also doctors engaged in making health services accessible for rural and Indigenous communities across the country.

“Should these allegations (of procedural violations during arrest) prove to be true, arresting officers are not only liable for violation of PNP’s (Philippine National Police) operational procedure[s], but also … violation of the rights of persons arrested and detained under Republic Act No. 7438,” the CHR said in its statement.

Castro’s family members also stated that they were not shown a proper warrant when she was being arrested. The Free Legal Assistance Group (FLAG), which is representing Castro, has also raised questions about the arrest, including the fact that her name was not even included in the list of over 300 names mentioned in the warrant that was issued by the regional trial court in 2020 and presented by the police at the time of arrest.

A protest was held at the University of the Philippines Manila’s Philippine General Hospital on Monday, February 21. Doctors, health workers, along with family members, colleagues and activists associated with Castro called for her release.

On Wednesday, a coalition of 14 rights groups and advocates released a joint statement condemning her arrest. Among the signatories of the statement were Karapatan, along with the Center for Trade Union and Human Rights, Coalition for People’s Rights to Health, Health Action for Human Rights, and Kapatid.

“She is a respected public health practitioner who has helped set up community centers and programs among the poorest and marginalized Filipinos in far-flung areas in Mindanao,” the statement read. “In the middle of a public health crisis, arresting a community health worker like Castro is a disservice to the communities she was working with.”

Makabayan’s senatorial candidate in the upcoming election, Neri Colmenares, also condemned the arrest and connected it to the recent hounding of civil society groups and activists under president Rodrigo Duterte’s administration.

“Witness accounts point that the incidents are lifted from the Duterte playbook of paranoia and political persecution: a campaign of red tagging and intrigue by state-backed vigilante groups followed by a questionable arrest using a dubious warrant stemming from a fabricated case involving 400 suspects,” said Colmenares.