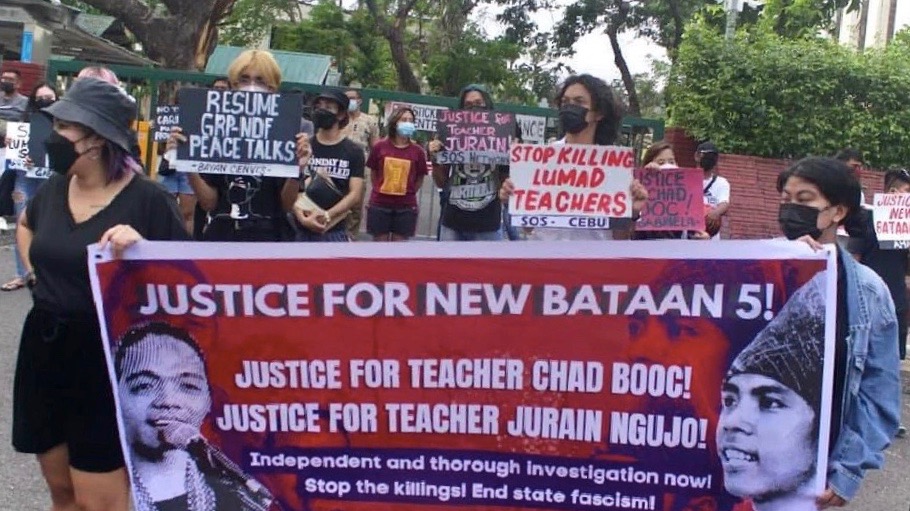 A resolution was filed in the Philippines Congress after social movements raised questions over a violent encounter by the military that killed five people last week in the southern part of the country. On February 28, legislators of the left-wing Makabayan bloc filed the resolution in the Philippines House of Representatives demanding an investigation into the circumstances surrounding the killings.

On February 24, two volunteer teachers, a community health worker, and two Indigenous people were killed in New Bataan town in Davao De Oro province in Mindanao in an alleged shootout with the army. Makabayan has called on the house committee on human rights for an “immediate” and “impartial” probe into the killings.

The army claimed that those killed were militants of the banned Communist Party of the Philippines (CPP) and its armed group New People’s Army (NPA). The army also alleged that two of the five killed, Chad Booc and Gelejurain Ngujo II, were militant recruiters.

While Booc was a math teacher in an Indigenous school in Surigao del Sur which was closed, Ngujo was a volunteer teacher at the Community Technical College of Southern Mindanao. The other three who were killed were community health worker Elgyn Balonga and two drivers.

Shortly after the army publicized the incident on February 25, progressive movements and Indigenous rights groups decried the killings as another violent incident of red-tagging targeting activists and those working for Indigenous welfare.

The Save Our Schools Network (SOS Network) rubbished the official version of events and stated that Chad Booc was sent by them to the region for research purposes. According to the group, Booc was on his way back to Davao City on the night of February 23, a day before he was killed.

“We strongly assert that the victims were community volunteers and civilians from varying backgrounds, and their murder must merit the strongest condemnation,” read a statement released by the SOS Network. The organization has been opposing forcible closure of Lumad (Indigenous) schools, and advocates for protection of volunteer teachers working there.

“He was subjected to intense Red-tagging, threats and harassment by state forces and the National Task Force to End Local Communist Armed Conflict,” the bloc added. Makabayan is a coalition of progressives party-list groups (elected from social sectors) like Bayan Muna, Gabriela Women’s Party, ACT Teachers and Kabataan.

In March 2021, Booc was charged in Cebu City for recruiting child soldiers for the NPA, which was eventually dropped by the public prosecutor for lack of evidence. Teachers’ unions have also raised alarm at the targeting of volunteer teachers in the region. The Congress of Teachers/Educators for Nationalism and Democracy (Contend) called the deaths “cold-blooded murder” and the military’s claim a “bare-faced lie.”

President Rodrigo Duterte’s government has been known for targeting activists and civil society movements in its war against the communist insurgents, which has led to an estimated death toll of more than 400 people so far.