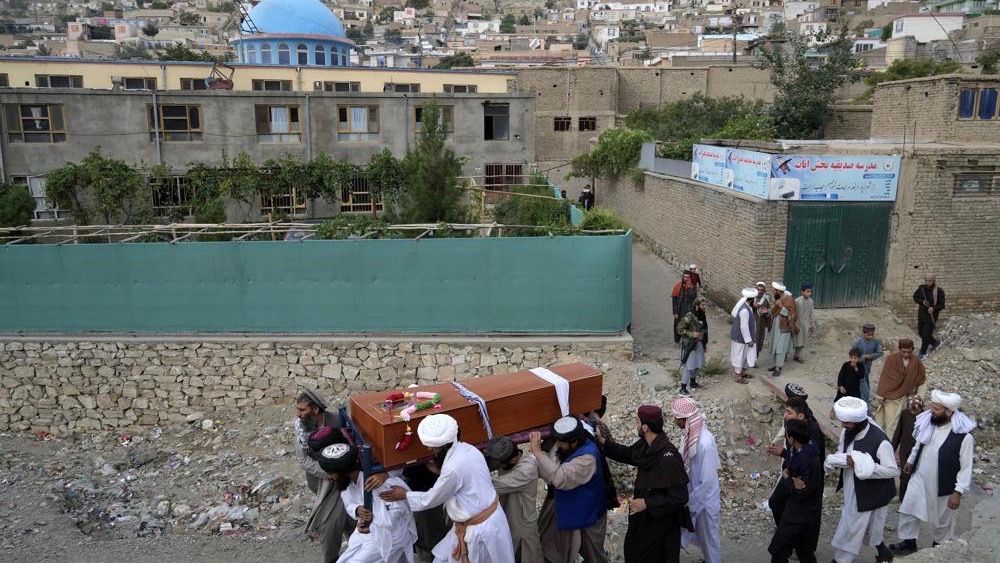 At least 21 civilians were killed and 33 others injured in a suicide attack at a mosque in Afghanistan’s capital Kabul on Wednesday, August 17. This was the seventh attack in the capital this month.

According to witnesses, the blast targeting the mosque in northern Kabul’s Kher Khanna neighborhood was so massive that windows of nearby buildings were smashed. Kabul’s police officials confirmed that as many as 21 civilians died in the explosion, including the imam of the mosque. Five children were among those critically wounded.

Stefano Sozza, the head of medical charity Emergency in Kabul, told BBC that the group had treated 35 civilians, including minors. “Our doctors were in need of assistance all night long while operating injured. The injuries were mainly related to the blast so there were shells inside the bodies and burning injuries all over the bodies of the victims,” Sozza said.

He added the attacker entered the mosque when it was crowded at prayer time in the evening and activated his improvised explosive device.

🔴 #Afghanistan #Kabul: 27 people received at our hospital so far following an explosion in the PD17 area. 5 children among them, including a 7-year-old.

The United Nations Assistance Mission in Afghanistan (UNAMA) in an earlier statement had urged the Taliban administration to provide greater security and ensure that Muharram processions by the minority Shia community are not targeted by extremist groups like the ISIS-Khorasan.

“Islamic State-claimed blasts in Kabul in recent days have killed and injured more than 120 people,” UNAMA has stated, stressing that the de facto authorities must prevent such indiscriminate attacks, and launch thorough and transparent investigations.

On August 7, a bus in Kabul was hit by a landmine. A report quoting witnesses said that at least three people were killed and over 10 civilians injured in the incident. A day earlier, a bomb explosion in a busy shopping street in Kabul had killed eight people and injured 22 others.

On August 5, at least eight people were killed and 18 wounded after a bomb that was hidden in a cart exploded near a mosque in a Shia neighborhood of Kabul.

On August 4, an explosion injured three people. A day earlier, on August 3, six people were killed and 11 others injured in a car blast and a sporadic gunfight in Kabul’s fortified Green Zone.