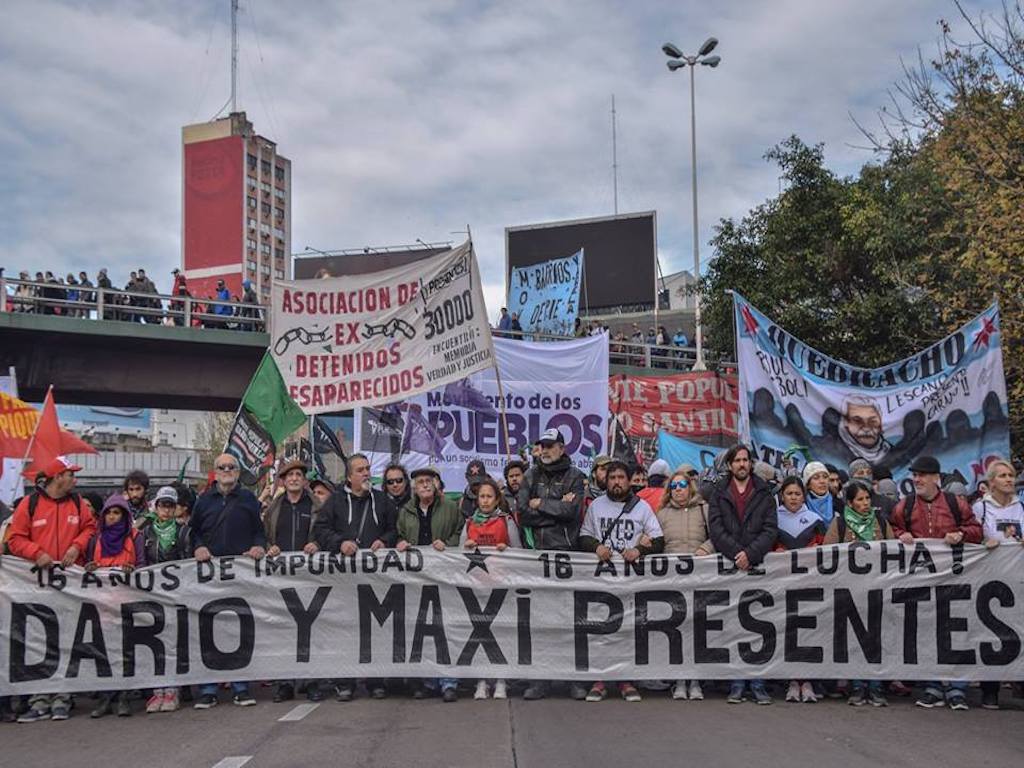 The gathering on June 26 vowed to carry forward the work of the martyred militants. Photo: Frente Popular Dario Santillán

On June 26, 2002, in the middle of a massive economic and social crisis, a protest was called for in Buenos Aires. The thousands of protesters were met near the Pueyrredón Bridge by armed police, who evicted them, injuring over 30 people. The police also brutally shot down two young activists, Dario Santillán and Maximiliano Kosteki, in what came to be known as the massacre of Avellaneda. While the police personnel who shot the duo were convicted, those in positions of power, whose actions were responsible for the incident, were never brought to book.

On the 16th anniversary of the massacre, a massive mobilization was carried out in Buenos Aires. Several social activists and people’s organizations demonstrated, demanding justice for Dario and Maxi. Frente Popular Dario Santillán, a social and political movement in Argentina, shared the following reflection on the demonstration and the current scenario in Argentina in a Facebook post:

This June 26, we once again remember the repression that took the life of our comrades Dario and Maxi in the vicinity of Pueyrredón Bridge during the massacre of Avellaneda ordered by former president Eduardo Duhalde. We, their companions, have come together throughout the country for the example they left us and the rebellion they entrusted to us. This is especially important for the new generations, which inspired by their struggles, have forged their political identity, raising their flags untiringly, becoming Dario and Maxi every day.

“We come here because we are important. I thank everyone for not forgetting them. Even after 16 years, they are still alive,” said Alberto Santillán, father of Dario, who spoke at the event. “It’s not just for Dario and Maxi, there are so many of them. In this damned democracy, there are thousands and thousands of fallen companions, like the kids killed by gunshots and women who are victims of human trafficking. Look at what happened to Santiago Maldonado [an activist who ‘disappeared’ during a protest in August 2017 and was later found dead], what happened to [Rafael] Nahuel [an activist who was shot dead by the security forces while resisting a raid on Mapuche activists]” said Alberto. Holding holding a green scarf in his hands, he also expressed his support for the right to abortion. “If Darius were alive he would support this cause,” he said. He also highlighted the case of Diana Sacayán, LGBTQI activist, in which the accused was found guilty and sentenced to life imprisonment two days after a national march against the transvestiticide.

The day was brightened by the color green, which represented the warmth of feminist struggles and the claim of the right to legal, safe and free abortion in Argentina. Women picketers carried out a Pañuelazo (a march with green handkerchief in hands) for legal abortion.

We have been fighting for justice for 16 years. In this time, we have succeeded in ensuring the killers get life imprisonment. Today, we again declare that the State and its institutions were directly responsible for the unjust repression on June 26, 2002. We continue to demand jail for the political leaders responsible for the murder of our comrades.

“It makes me angry that many companions who have walked with Darios, who have walked beside me, who have embraced me, who demanded justice next to me; today, we see them standing behind the murderer Felipe Solá.” said Alberto Santillán. And this is why we say that  as far as Duhalde, [Luis] Genoud, Juan José Álvarez, Aníbal Fernández, [Alfredo] Atanasoff, [Jorge] Vanossi and Felipe Solá are concerned, the only thing they deserve is trial and punishment for the assassination of social militants.

16 years after the murder of Dario and Maxi, at a time when the Macri government is trying to carry out a political, economic and cultural plan at the service of imperialism and its multinational allies with the aid of the IMF, we will not accept that social protests be responded to with sticks, gases and repression.

We are the people of December 20, we are Pueyrredón Bridge and we will continue to respond in the same way  – with more and better people’s organizations every day creating people’s power.

Jail to the political leaders responsible for the massacre of Avellaneda.

To Eduardo Duhalde, the main culprit of the repression.

To Aníbal Fernandez, former general secretary of the presidential office.

To the former Minister of Justice of the Nation, Jorge Vanossi.

And to the then governor of the province of Buenos Aires, Felipe Solá, who today aims to present himself as an alternative to Cambiemos party.

No to the repression of the social protests and the people’s struggles!

Protesting is a right!