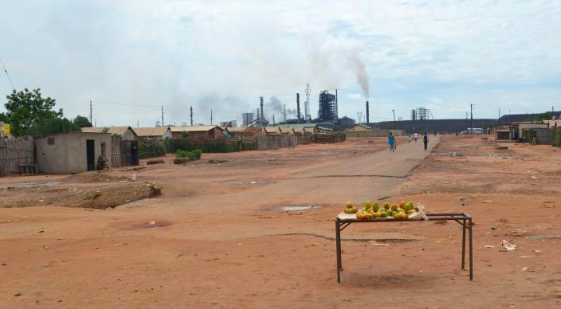 The Mopani Mine next to Kankoyo Township, Mufulira, Zambia. Photo: ActionAid

Recently, Industriall a global federation of trade unions submitted a statement at a United Nations Human Rights Council (UNHRC) meeting on the violations of workers’ human rights by mining giant Glencore. In Zambia, which has seen many such violations by the company, unions are working to confront the company, as well as educate workers on their rights, said Alberto Mando of the Foundation for Labour Relations Limited.

Glencore has been known to regularly intimidate its protesting employees with threats of dismissals. The mining giant, which controls 50% of the world’s copper market, also resorts to threats of labour reduction if its suppliers and governments in the countries it operates in do not agree to their various demands. In countries that are already dealing with rampant unemployment, these threats sometimes lead to governments agreeing to Glencore’s conditions.

One recent case in Zambia was when the company failed to agree on electricity tariffs with the Copperbelt Energy Corporation (CEC) and subsequently threatened to reduce its workforce. In Zambia, the company owns Mopani Copper Mines (MCM) that controls the mining sites of Mufulira and Nkana, where a substantial amount of Zambia’s copper and cobalt are produced.

MCM, incorporated under Zambian law, is owned by the British Virgin Islands-based company called Carlisa Investments Corporations, which itself is owned by the Bermuda-based Glencore Finance Ltd, which is fully owned by Glencore Switzerland.

In the case of Glencore’s dispute with the CEC regarding the electricity tariffs, Mando said the issue was only resolved after the government intervened. Both these companies are privately owned, with CEC supplying power to the mining company. The latter refused to accept the hike in tariffs put in place by CEC. At one point, the CEC shut down electricity to the plant bringing mining operations to a standstill. Eventually, the government got the companies to resolve their differences and CEC agreed to increase the tariff bit by bit instead of in one go.

This is not the first time the Mopani mines have come under the scanner. In 2015, Glencore fired 4,700 workers from its operations, and made its remaining workers toil underground for 24 hours at a stretch. In 2017, three workers were killed in Glencore’s copper mines, but the company publicly acknowledged only one death, while its Zambian subsidiary claimed it was fatality-free in 2017.

Regarding the deaths that occured in Mopani mines, Mando said the incident was followed by trade unions heightening the monitoring of working conditions. The Zambian government also created a department to check on the safety of the mines. This close monitoring has led to a slight improvement in working conditions, said Mando. The company is also now compelled by law to ensure the safety of workers.

However, the Foundation for Labour Relations Limited is determined to hold Glencore to account for its malpractices and labour rights violations. Mando said the organization was trying to sensitize members of trade unions on their rights as workers, including how they ought to be treated by their employer. They also have plans of engaging trade unions in terms of training. He noted that the government had not done much to help the workers and added that it was important that labour movements be directly involved in negotiations with the employers.

A recent report by the International Trade Union Confederation (ITUC), based on a survey of working conditions across the globe, rated Zambia very poorly. The country was given a rating of 4, which meant there were ‘systematic violations of rights.’