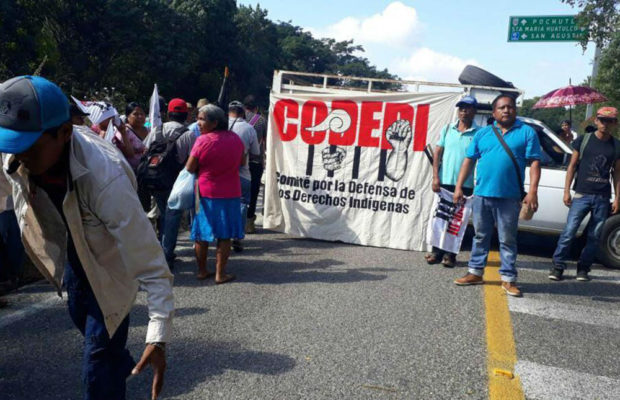 Residents took to the streets in protest against the second killing of members of Codedi in recent times. Photo: Desinformémonos

A defender of indigenous rights, Abraham Hernández González, was found dead in the community of Cuatunalco, Oaxaca, on July 17 after having been kidnapped the same morning by unknown individuals. This is the second attack this year against members of the Committee for the Defense of Indigenous Rights (Codedi). In February, three other members were killed in an ambush. No one has been arrested for the crime yet.

Hernández was the regional coordinator of Codedi in the community of Salchi in the district of Pochutla. He was kidnapped at the hotel where he worked as a manager by individuals dressed in military uniform. His body was later found in Cuatunalco and identified by his daughter on Tuesday afternoon.

“All the abductors had their faces covered and were dressed like soldiers”, said Abraham Ramírez Vázquez, spokesperson of Codedi in Oaxaca said.

Ramírez said that people will take to the streets to demand justice and for “the government to enforce the rule of law.”

“We demand that the Attorney General of Oaxaca punish those responsible for the crimes”, he said.

However, in Mexico, justice is hard to come by. Recently, Impunidad Cero (Zero Impunity, a civil society organization) released a report which showed that the impunity rate in Mexico had reached 98.86%, with 4 out of every 5 investigations that were initiated within the new accusatory criminal justice system in 2017 remaining unsolved. In the case of murders, the impunity rate was 82.3.

The organization warned that the prosecutors did not have the necessary resources to take up cases. In addition, not even half the arrest warrants issued by the courts were executed.

Impunidad Cero added that in Mexico, the whole justice system failed due to the low confidence in the authorities and the long waiting periods in the public ministries, which meant that 93.6% of the crimes were not reported.

In case of homicides, it reported that in 15 states, including Baja California, Michoacan, Baja California Sur, Tamaulipas, Morelos, Guerrero and Oaxaca, at least nine out of ten murders were not solved in 2016.

The organization added that the shortage of officers generated a collapse of the justice system. For instance, in Sonora or Puebla, each officer was in charge of more than 327 investigation files.

In addition, to register a complaint, a citizen had to wait an average of three hours in states like Guerrero, Michoacán, Puebla and in Mexico City.  Only 10.3% of the citizens felt they had “high confidence” in the state’s public prosecutors’ offices in 2017, the report said.