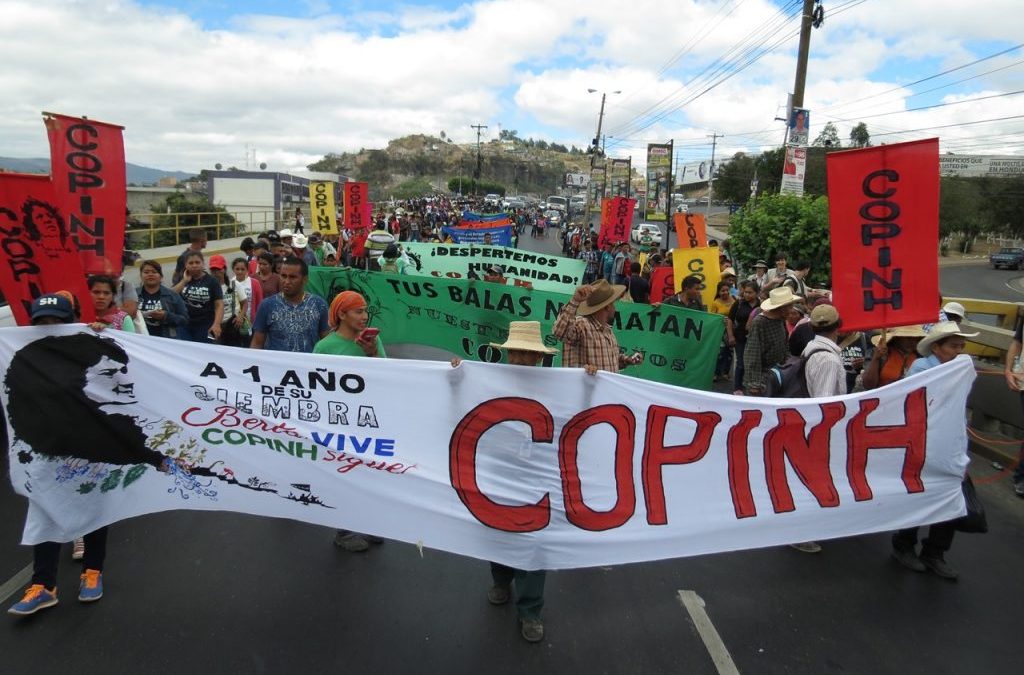 29 months have passed since Berta Cáceres was assassinated in her home in La Esperanza, Honduras. The case reverberated across the world, but justice is yet to be delivered. The current legal process, which will see the prosecution of the first set of people to be arrested, has been marked by irregularities and a systematic attempt to prevent the victim’s legal team from accessing the evidence. It has also been marked by the unwillingness of the authorities and the  judicial system to see the case in the broader context as evidenced by the refusal of the trial court to recognize the status of victimhood to Berta’s organization, Civic Council of Popular and Indigenous Organizations of Honduras (COPINH).

The assassination occurred in the context of a sustained struggle by the indigenous Lenca community in Río Blanco led by COPINH against the Agua Zarca hydroelectric dam project. The community was opposed to the project for several reasons. The concession for the project was given without respecting ILO Convention 169. The convention, which was ratified by the Honduran government in 1995 only after a sustained struggle by COPINH, states that before granting a contract for an extractive project in indigenous territory, the government is obliged to carry out a consultation process that is free and informed. The dam was also controversial because it was to be built on the Gualcarque river which is sacred for the indigenous Lenca people.

The dam, which was to be built by the company DESA (Desarrollos Energéticos S.A.) was financed by the Dutch Development Bank (FMO), FinnFund, the Central American Bank for Economic Integration (CABEI), USAID, FECOSA Bank and the World Bank, amongst others. Shortly after Berta was assassinated, several key funders of the project pulled out in response to international pressure, and DESA was forced to suspend construction. However, they still have the contract for the project and could resume it at any time.

Considering the significance of the national and international investors, COPINH’s fierce opposition to the project was met with well-financed and calculated repression. Since Berta’s assassination, COPINH has insisted that DESA, the Honduran state and the several international banks and development funds which financed the project were directly responsible for her assassination. A report released on October 31, 2017 by the International Advisory Group of Experts (GAIPE) confirmed their hypothesis, concluding that Honduran state agents and senior executives of DESA colluded in “the planning, execution and cover-up” of the assassination.

Despite the international pressure, the Honduran government continues to make the delivery of true justice in this case impossible and has chosen to focus on those directly responsible and the incident itself, rather than the broader context. The rejection of the status of  victimhood for COPINH in the case is part of this general trend.

Berta Zúniga, the general coordinator of COPINH, explained why the organization pushed for legal recognition as a victim: “What we were seeking with COPINH presenting itself as a formal victim is not about the repercussions in the legal process necessarily but a symbolic repercussion which would mean that the social organizations that partake in the struggle are also affected when like in this case, the general coordinator of COPINH is assassinated. If this was accepted, it would have marked an important precedent because in Honduras, many leaders of social organizations have been assassinated, and these organizations would be able to present themselves as victims of these events which violate the fundamental right to life and makes difficult the work that is being done in a collective way against hydroelectric projects for example or the struggle that is on the ground in each case.”

Victor Fernandez, the lawyer who is representing Berta’s family and is also an activist in the Broad Movement for Justice and Dignity (MAJD),  spoke about the implications of the court’s decision. “We regret the decision of the court because it sets the trend of not recognizing the political subject that Berta Cáceres was. We have been saying that Berta Cáceres was not assassinated for being just a living, breathing human being. She was assassinated for being a political subject. DESA, who is responsible for this crime, did not kill her because she was Bertita, but she was Bertita, a militant comrade of the people’s movement in Honduras, fully committed with her body and soul in the struggle of COPINH and to the opposition to the hydroelectric project. That is who they assassinated.”

“The comrades of Berta Cáceres should be recognized as affected in the trial and should be part of the process. This did not happen and it sets the trend of not recognizing the political subjects that are part of the dissidence in this country that confront an economic and political model that violates human dignity. However, we participate in this trial from this perspective, from claiming dignity in building distinct societies through our praxis, from our denouncements, from our permanent protest” he said.

Fernandez added, “Our intention is that this trial does not only judge what happened on March 2 when Berta was assassinated but what happened months and even years before in the struggle preceding this tragic event. In order to reach the intellectual author – those who were truly responsible – we are carrying out actions on a national and international level, with a clear political perspective always highlighting the dignity of Berta, her people and all those who struggle. We have a comprehensive legal perspective of what it means for Honduras, Central America, Latin America and the world, that certain economic sectors have as a recurring option the assassination of those who do not think on the same lines as them, of those who do not applaud them, and those who have the courage to confront and resist them.