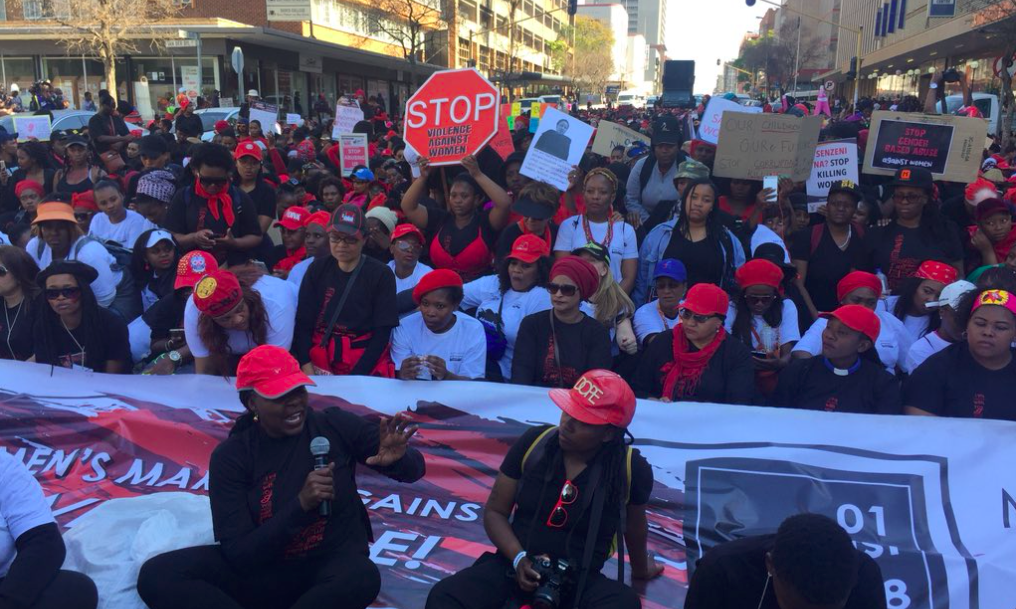 Women and GNCs march to demand an end to gender based violence and rape culture. (Photo: NUMSA/ Twitter)

On Wednesday, South Africa witnessed a nation-wide shut down against the increasing gender-based violence. Tens of thousands of women and gender non-conforming (GNC) people marched across the country demanding an end to rape culture and gender-based violence. Chanting ‘enough is enough’ and ‘my body is not a crime scene’, they marched through various cities.

Marches were organized in all nine provinces in the country and also in Lesotho, Swaziland, Botswana and Namibia. As part of the march, a call was given for a shut down of economic activities for the day or at least between 1 pm and 1.30 pm.

“Every week, we receive multiple reports of women, children, and gender non-conforming people who have been brutally murdered, kidnapped, or abused, and there is no sense of urgency from our leaders to find ways in which society can tackle this violence,” said the organizers of the Intersectional Women’s march.

According to South African Police Service (SAPS) crime statistics, in 2017, 49,445 sexual offences were recorded, while in 2016,  51,895 complaints of sexual offences were filed. The South Africa Demographic and Health Survey 2016, conducted by Stats SA and the South African Medical Research Council (MRC), noted that one in five women had experienced violence at the hands of a partner. Also, the report underlined that women living in the lowest wealth quintile (among five) experienced the most physical violence, as did women with no education.

The major trade unions, South African Federation of Trade Union (SAFTU), National Union of Metalworkers of South Africa (NUMSA) and Congress of South African Trade Unions (COSATU), among others, extended their support to the march. NUMSA, in a press statement, speaking about the rising gender-based violence and xenophobia, noted the case of a Zambian woman, who while speaking at last week’s Working Class Summit narrated the discrimination faced by her and the horrific treatment she had received at a hospital after being gang raped and attacked.

The total shutdown is happening as Women’s Month begins in South Africa commemorating the the August 9, 1956 Women’s March, when more than 20,000 women led by the Federation of South African Women (FSAW or FEDSAW) marched to the Union Buildings in Pretoria against country’s apartheid law. The law required a form of internal passport system designed to segregate the population and prohibit black people from urban areas, which were declared as ‘white only’.