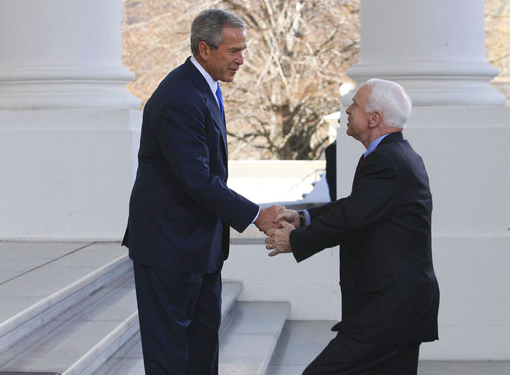 Warmongers such as John McCain and George Bush have begun to acquire a halo of respectability in the aftermath of Trump's rise to power: Photo: Eric Draper/Wikimedia Commons

It is almost ironic that amid the resurgence of a more aggressive right globally, key figures from that ideological spectrum from an earlier era acquire the halo of being respectable, decent individuals who were committed to democratic and humane values. The recent chorus of praise following the death of former Indian Prime Minister and right-wing politician A.B. Vajpayee is a case in point. Over the weekend, as tributes flowed in for John McCain, the US senator who died at the age of 91 from a rare form of brain cancer, a picture emerged of a maverick, American hero, who stood for the country’s values and was an icon of decency in the age of Trump and an increasingly rabid Republican party.

Forgotten amid the acclaim, it seemed, was a career built on warmongering. The media and his colleagues remembered his opposition to torture in Iraq. Some even recalled his belated admission that the war was a mistake. What was tactfully ignored or only casually mentioned was his relentless support for the war in the first place and his innumerable critiques of the Bush government for not deploying enough troops. McCain’s support for the Iraq war was not a blip in his public record. War, it seemed, was McCain’s response to so many issues. His demonizing of Russia and contributions to escalate the Russia-West feud, his votes in favor of the first Gulf war and the invasions of Afghanistan, his impatience to bomb Iran, his unwavering support to Israel for its frequent massacres in Palestine through the years, including the recent disastrous move by the Trump administration to shift the US embassy in Israel to Jerusalem which violated international law – all these were part of a pattern.

Undoubtedly, McCain’s elevation to the status of a politician of integrity owes a lot to the rise of Donald Trump. He is not the only beneficiary. Former president George Bush, whose contribution to violence, death and human rights violations is second to none, is among the figures who are slowly  becoming acceptable and finding political relevance after years of being publicly and politically ridiculed. Trump’s policies and pronouncements make many yearn for an older value system – when war crimes could be normalized and sanitized dismissively as “mistakes”, like McCain did in his memoir before his death. Or the time when he proved his own ‘decency’ by defending Barack Obama as a “decent family man” to a racist woman at one of his campaign rallies. The woman had ranted about Obama being an Arab and McCain chose to stand up for the man while refusing to counter the explicit racism that was on view that day. Nor did he restrain those around him like his vice-presidential running mate Sarah Palin and others, including Donald Trump, from launching wave after wave of allegations that openly and subtly invoked racist tropes.

In fact, McCain undoubtedly paved the way for Donald Trump by choosing Sarah Palin as his running mate in 2008. That one move gave legitimacy to the kind of ridiculous, anti-intellectual, conspiracy-mongering and racist politics that Trump has normalized today. Palin’s ability to appeal to certain sections of  the population with such rhetoric was an indicator that the time would soon be ripe for the shift to the right we are seeing today.

The origin story of John McCain, the hero, matches his later record. The American carnage in Vietnam made Mccain a household name, not for his role in the killings of innocent Vietnamese, but for being tortured after he was captured. That war killed approximately 3 million Vietnamese, including many children, women and unarmed men. More tonnes of bombs were dropped on Vietnam than during the second world war. McCain took part in Operation Rolling Thunder as a navy fighter pilot, flying 23 bombing missions of half an hour each, senselessly and indiscriminately killing countless civilians before his plane was shot down on October 26, 1967 over Hanoi. In prison for more than five years, McCain swiftly confessed to committing war crimes against the Vietnamese people.

McCain advocated for American intervention on many other occasions as well. He visited the controversial Free Syrian Army (FSA) in 2013 and repeatedly called for western military intervention in Syria and for western powers to freely supply arms to the FSA and other rebel groups. Most recently, he welcomed Trump’s decision to launch airstrikes on Syrian government forces in 2017. In 2009, McCain offered to sell US weapons to Libyan leader Muammar Al Gaddafi, but in 2011, fervently advocated western intervention and regime change in Libya, a country which is now besieged by terrorist groups with extremist ideologies.

McCain’s most steady advocacy of confrontation in recent times was in the case of Russia. Repeatedly in 2008 and 2014, during the conflict between Georgia and Russia and during the Ukraine crisis, McCain advocated for war and increased western military presence on Russia’s borders in those two countries, which led to a steep decline in Russia-West relations, and raised the possibility of war and conflict.

Despite its human rights violations and war crimes in Yemen, McCain was also a staunch supporter of Saudi Arabia, going to the extent of blocking a bipartisan senate legislation that advocated restricting the sale of arms to the kingdom in an attempt to reduce the number of civilians being killed in Yemen. Over the years, McCain also made similar calls for war and intervention elsewhere, including Bosnia and Kosovo, Mali, Sudan, Nigeria. It is safe to say that his calls for NATO to “cream the Serbs” and to use “any means necessary” to destroy Serbia, and his jokingly singing a Beach Boys song to bomb Iran in a 2007 presidential campaign event will never be forgotten.

If there was ever a mascot of the United States of America and its interventionist, warmongering foreign policy, it was John McCain, his measured, statesman-like demeanor hiding sinister, imperialistic foreign policy objectives and divisive right wing conservatism. With Trump, the mask has come off, and that is what many in America probably miss the most in John McCain, the illusion of exceptionalism.