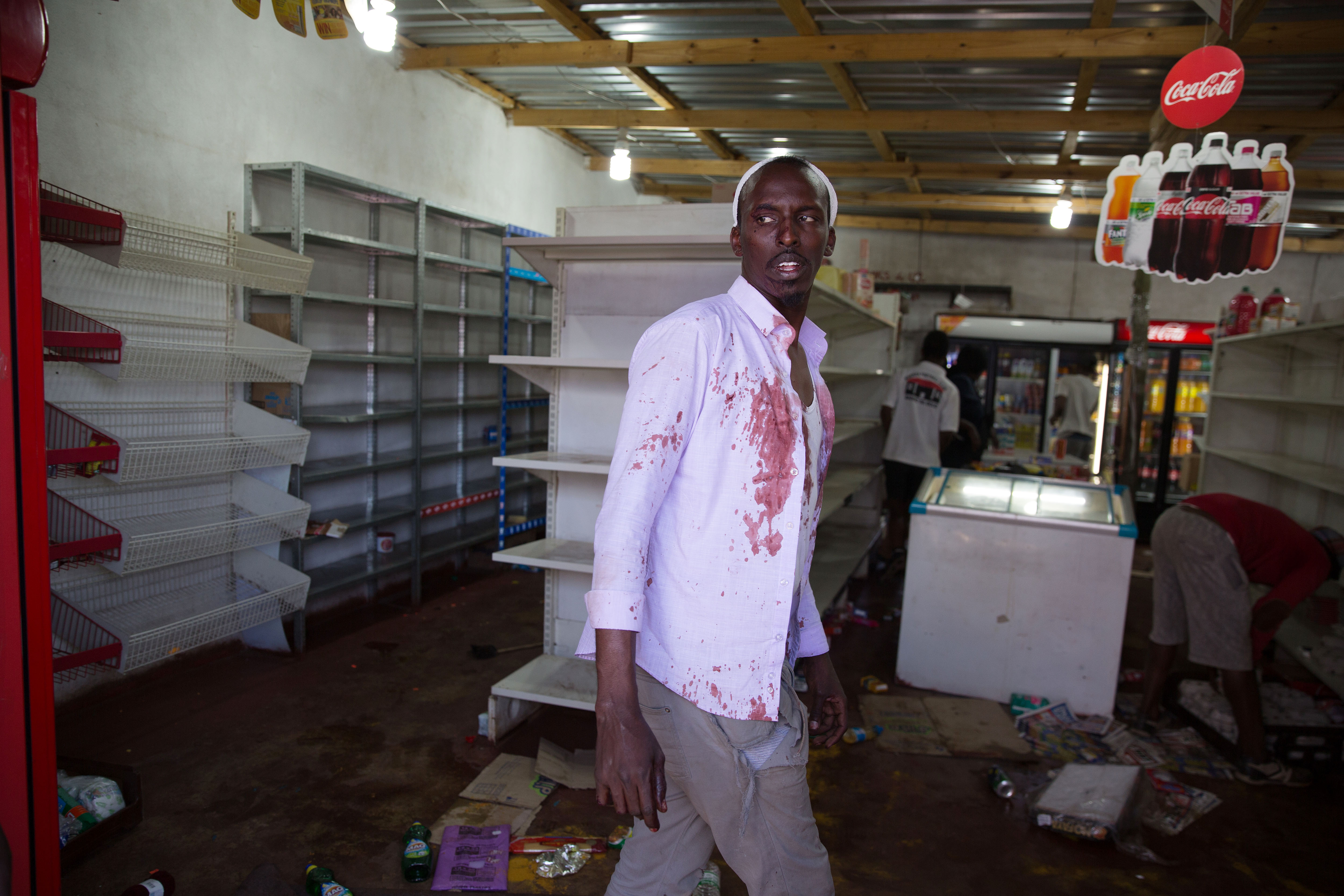 A series of xenophobic violence has gripped South Africa’s Soweto township, as people went on rampaging properties and shops belonging to migrant communities. The violence, which began on Wednesday has claimed three lives. Earlier in 2008 and 2015, South African had witnessed several incidents of xenophobic violence and more than 60 people have been killed in the past decade. New Frame captures the incident and struggle of Somalians living in South Africa.

In 1976, Morris Isaacson High School in Jabavu, Soweto, was a key site in an insurrectionary student uprising against the apartheid government following its attempts to make Afrikaans mandatory at schools. Student leader Tsietsi Mashinini led hundreds of his peers in protest. The revolt was met with murderous repression that sent shockwaves across the planet.

Today, across the road from the school is a memorial site with a wall marked with the words “Commemorating Youth Uprising”.

On Wednesday teenagers in school uniforms, along with others, looted shops, mainly owned by Somali migrants, near Morris Isaacson High School.

In the days leading up to Wednesday’s violence, messages were circulating on social media and WhatsApp groups alleging that migrant shop owners were selling expired and fake goods.

The allegations were then reported in the media, along with promises of “raids” and “crackdowns” by government officials.

One of the messages circulated on WhatsApp read: “On the 29th we are striking all provinces, towns, locations. No one will be going to work.”

A separate message warned that: ”Every South African who has rented their garage to Somalians or spaza shops must chase them out or else the house and spaza shop will be burnt on the Saturday the 8th of September.”

On Wednesday morning, 29 August, a Somali spaza shop owner allegedly shot a teenager as he and other people tried to break into the shop.

The situation quickly became inflamed and, by the end of the day, shops owned by migrants had been looted in many areas around Soweto, including Jabavu, White City, Meadowlands and Moroka.

Despite some people saying they just wanted to destroy goods that they claimed to have expired, school children – some still in school uniforms – looted shops and left with crates of cool drinks and other goods. Some were armed with screwdrivers and knives.

On Wednesday afternoon, ANC [African National Congress] spokesperson Pule Mabe issued a statement condemning what the party alleged to be a “surge” in the sale of “expired and fake” goods. The statement did not condemn the attacks on shops owned by migrants, or offer any evidence that the claims made in the rumours circulated prior to the attacks were valid.

By Thursday afternoon, three people had been killed during the violence. Dlamini refused to give  New Frame the names of the people and said their families still had to be informed.

“A foreign national was arrested for murder and two people were arrested for attempted murder. They are also facing charges of possession of unlicensed firearms,” he said.

Onica Manyoni, who lives in Jabavu, condemned the actions of those who tried to steal goods from Lucky Supermarket, on the corner of Crutse and Mputhi streets in Jabavu.

“This is not right,” she said, standing in the door of the shop as the owners were loading goods into trucks and on the back of bakkies under the watch of a handful of police officers. “I don’t like this. What these people are doing is wrong.”

Manyoni said she didn’t recognise any of the people who were in the crowd trying to break into the shop before the police arrived. “We don’t know them. They’re not from here,” she said.

“The Somalis help us when we need help. The people doing this are hurting us. Now I must take a taxi to go to another shop just to buy one thing.”

“What can I do? Since I came to South Africa, it’s been like this. Every year, it’s the same problem.”

Nineteen-year-old Kabelo Majoro was one of a number of locals who helped pack the goods into the trucks. “I’ve been coming here almost every day since day one. These people are nice to me,” he said. “The community is busy harassing them, so I’m just trying to help.”

Another man who stood by and watched at another site where a spaza shop was looted said he also didn’t recognise the perpetrators as people from his immediate community. “We don’t know these thugs. I’ve never seen any of them around here.”

Sitting in his flat in Mayfair, near the Johannesburg CBD, Abdinuur Dahir Hirsi, 31, one of the co-owners of Lucky Supermarket in Jabavu, shrugged when asked how he felt about the attack on his shop. “What can I do? Since I came to South Africa, it’s been like this. Every year, it’s the same problem,” he said.

Hirsi and many other Somalis who had shops in Soweto packed up their goods and fled to Mayfair when the violence started on Wednesday.

Najib Hassan, 22, had to hide in the back of the shop where he worked and fled Soweto at 4am on Thursday. He went to seek refuge with family members in Mayfair as well.

“What must happen now? I sell those cakes to make money. I need to sell them to survive. We need money to buy food, to pay the rent.”

“It is very unsafe for us there. In Somalia, there is fighting. We come here, and there’s fighting here in South Africa. I will look for another place to work because Soweto is too dangerous for me.”

Hassan’s sister, Safiya Hassan Omar, 35, said the temporary closure of shops in Soweto was affecting her livelihood. She bakes cakes that are sold at spaza shops in Soweto. “What must happen now? I sell those cakes to make money. I need to sell them to survive. We need money to buy food, to pay the rent,” she said. Her only income came from selling cakes.

“I cannot even explain to you how I feel. We are just innocent people trying to make business and survive, “It will take us two years to recover from this.”

30 August 2018: Safiya Hassan Omar and her sister Rariya outside their flat in Mayfair. Photograph by Madelene Cronjé

Although Somali shop owners were able to save most of their stock and flee the violence in Soweto, Muhamud Ali, 49, said he and other business owners suffered serious damages.

One of his trucks had the front window, both side windows and mirrors smashed as they shop owners tried to remove goods on Wednesday. “I cannot even explain to you how I feel. We are just innocent people trying to make business and survive,” he said. “It will take us two years to recover from this.”

30 August 2018:  Abdinuur Dahir Hirsi got to save some of his stock with the help of fellow Somalians who brought trucks and cars to help with the load. Photograph by Madelene Cronjé

Ali said he and his business partners were still missing four trucks following the violence.

On Thursday afternoon, a number of Somali men in Mayfair jumped into trucks and sped off to Orange Farm where they heard that more shops were being attacked.  New Frame has not yet been able to verify this with police.