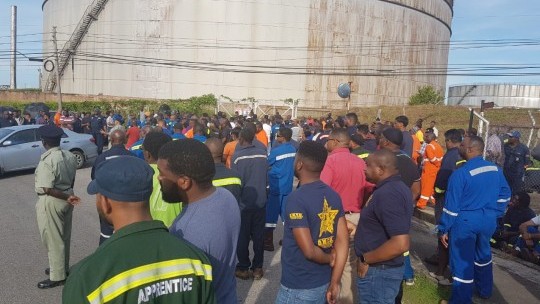 Workers across Trinidad and Tobago staged a strike on September 7.

A week after the board of directors of the state-owned Petrotrin oil refining company decided to shut down the one and only oil refinery in the country on August 28th, the main trade union representing Trinidad and Tobago’s oil workers, Oilfields Workers’ Trade Union (OWTU), organized a strike on September 7, protesting the decision.

The closure of the refinery entails the loss of jobs for 3,500 workers, while 1000 others will have to reapply for jobs in the exploration and production division of the company. The company cited operating losses from crude imports in the last few years for the decision. The company  purchases up to 100,000 barrels per day (bpd) out of the 150,000 bpd refining capacity to cater to the fuel needs of Trinidad and Tobago.

“We will be up and down the streets, this place will be shaking. The government is about to make a decision that would plunge Trinidad and Tobago into chaos and mayhem,” Ancel Roget, president general of the OWTU, told Reuters.

The Federation of Independent Trade Unions and Non-Governmental Organisations (FITUN) had also earlier demanded that the government drop its decision to close the Point-a-Pierre refinery. T & T’s joint trade union movement (JTUM) had also made public its intentions to go on strike on September 7, in support of the protesting oil workers.

Shiraz Khan, president of the Farmers Union, said the unions were no longer prepared to “take that damn stupidness” from the government. He also warned that the strike on September 7 was only the beginning. Idi Stewart, president of the Trinidad and Tobago Registered Nurses Association (TTRNA), also said that the nurses would be advised to not go to work.

Similarly, the Trinidad and Tobago Unified Teachers Association (TTUTA) also declared that schools “will be devoid of teachers.” TTUTA president Lynsley Doodhai warned the authorities, saying, “You touch one worker, you touch all workers.” He also emphasized TTUTA’s solidarity with OWTU and pledged any necessary support that might be required.

Michael Prentice, president general of the Amalgamated Workers Union, said that his organization supported the OWTU’s position to discuss a restructuring of Petrotrin. Workers from other unions which represent civil servants, truck drivers, bank workers, seamen and waterfront workers, customs, immigrations and revenue officers also lent support to the oil workers’ strike. Watson Duke, president of the Public Services Association, told his fellow members to call in sick for work that day, to observe a day of “rest and reflection.”

The government, in response, threatened the striking workers, with the minister of public administration saying that if the workers did not come to work on the day of the strike or participated in the strike action, they would face fines and even jail time. Union leaders and members responded to the threats with slogans like “Bring it on” and “Build a Bigger Jail.”

Petrotrin is currently TT$12 billion in debt, and has incurred losses worth TT$8 billion in the last five years. It also owes TT$ 3 billion to the government in the form of taxes and royalties. According to reports, the company will need an investment of TT$ 25 billion to keep on operating, without which it may suffer losses of approximately TT$2 billion every year.

The decision to organize the strike came after the OWTU workers rejected an offer made by the government on September 2, which involved the workers buying the refinery to prevent it from closing down. On September 3, representatives of 12 trade unions wrote to the president of Trinidad and Tobago, asking for an urgent meeting to discuss the matter. The letter also stated that the firing of the workers was a violation of the terms.

Solidarity is the road to liberation
RECENT ARTICLES