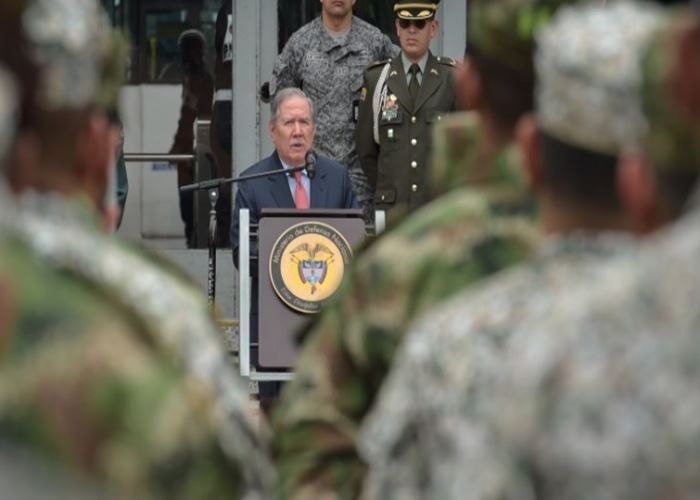 Guillermo Botero Nieto, the minister of defense of Colombia, recently came out with harsh statements against social movements and protests in the country, further jeopardizing the lives of social leaders, who already face a number of threats. The minister, who is in charge of security, defense and military affairs, made these statements during a conference of Confecamaras (Colombian Confederation of the Chamber of Commerce) on September 14.

Botero said “social protest is financed by illegal money”, and added that the organized mafia was behind the the street closures due to protests. His statements need to be seen in the context of earlier proposals to regulate social protests, and mark an offensive against the fundamental, legitimate and necessary right to protest which is enshrined in the Colombian constitution. The ombudsman’s office rejected his statements, terming them violations of the principle of distinction of international humanitarian law.

A key question arising from these statements is why the focus of the minister of defense and the present government of Iván Duque is not on seeking solutions to the systematic extermination of social, indigenous and peasant leaders. Also relevant is the question of why the military intelligence been unable to unmask urban paramilitary groups such as Las Aguilas Negras that have been operating in the country for more than 10 years.

Although Botero released a communiqué on the same day that he made these statements, clarifying that “the Minister of Defense should guarantee that every citizen can exercise their constitutional rights”, these could justify future violations by police forces against the social movements, act as an excuse for new judicial proceedings against people linked to the social movements, and, even more distressing, act as a catalyst for new attacks against organized movements.

In this regard, the senate will arrange for a debate in which sanctions against the minister will be studied.

While the defense minister makes dangerous statements that threaten the safety of social leaders, President Iván Duque, who took the office on August 7, pulled out of talks with the National Liberation Army (ELN) even after they followed through on the humanitarian agreement by freeing 6 people in captivity.

In his presidential speech, Duque announced a period of one month to evaluate the course of peace negotiations and its continuation. After this period, the peace dialogues were suspended and the government of Duque demanded that the ELN release of all abductees and to cease all their military activities.

On September 11, the ELN freed in the Department of Chocó, six people (three police officers, two civilians and a soldier) who had been detained since the beginning of August. Three other soldiers had been released in Arauca earlier this month. With these nine unilateral releases, the guerrilla group complied with the conditions announced to facilitate the continuation of the peace negotiations.

While the ELN has insisted on the bilateral nature of the agreements and on the negotiation of the end of the military activities, the government of Ivan Duque has insisted on maintaining preconditions for the continuity of peace dialogues. The peace in Colombia still remains entangled.