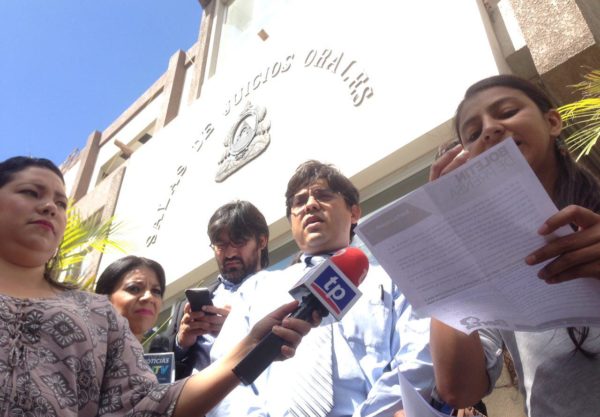 Laura Zúniga speaking to the press before the trial was set to begin on Monday. Photo Credit: COPINH

On Monday, September 17, nearly half an hour before the beginning of the first trial in the Berta Cáceres assassination case, the legal team of the family of Berta and the Civic Council of Popular and Indigenous Organizations in Honduras (COPINH) announced at a press conference outside the Supreme Court in Tegucigalpa, that they would file a legal action to disqualify the judges of the court hearing the case. After receiving the petition for disqualification of the judges, the court announced that the trial would be suspended until they resolved the petition.

Berta Cáceres was working as the general coordinator of COPINH when she was assassinated by hitmen on March 2, 2016. Since 2013, Berta and COPINH had been working with the community of Río Blanco, resisting the Agua Zarca hydroelectric project that the Honduran company DESA (Desarrollos Energéticos S.A.) was trying to build on the Gualcarque River that is sacred to the Lenca community. The project had significant funding and support from several international banks and institutions like FinnFund, FMO, World Bank, and USAID.

In the press conference, members of COPINH denounced the fact that “The three-judge panel responsible for this case has failed to guarantee our rights as victims and even the rights of the accused by allowing the public prosecutor to conceal information, and as a consequence, the truth, showing partiality constitutive of a crime.”

Frustrations were also voiced at the trial being relegated to an extremely small courtroom with very limited seating. This move was peculiar considering the case has been so visible nationally and internationally, and it essentially meant that access was difficult even for family members of Berta, members of COPINH and the international observers who were present to ensure the trial upheld legal standards. In a social media post, COPINH also denounced the fact that at 9 am, when the trial was supposed to begin, the court had begun the evidentiary trial of a different legal process.

Outside the courthouse, members of COPINH, the Black Fraternal Organization of Honduras (OFRANEH) and other organizations marched towards the Supreme Court to demand justice for Berta and to denounce the actions of the court.

Upon arriving at the courthouse, the organizations held a peaceful rally, but soon, individuals allegedly paid by the hydroelectric company, DESA, began to try to agitate and provoke the participants of the rally. The individuals hurled insults at the protesters, held signs demanding the freedom of the individuals on trial for murdering Berta, and attempted to violently attack the rally. Despite the heavy militarization of the courthouse and surrounding area, no attempts were made by the police to stop this violent group from arriving at the same area where the COPINH members were gathering.

The court has not given a date for when the trial will be resumed though the legal team expects that it will be soon as the preventative detention for several of the people on trial expires in the beginning of November. The appeals court also has to resolve five injunctions that were presented by the legal team of the family and COPINH wherein they challenged the decisions made by the judges to reject evidence, experts, and witnesses that contextualize Berta’s assassination in the struggle against the Agua Zarca project, as well as implicate several high-level executives of DESA and members of the Atala family of Honduras.

Observers have noted that the general climate of aggression and hostility both inside and outside the courtroom towards COPINH is telling of the attitude of the Honduran government towards the case. It has only taken concrete action in the case in response to national and international pressure, and it continues to pursue the narrative that Berta’s assassination was isolated from her and her organization’s struggle against DESA’s hydroelectric project.