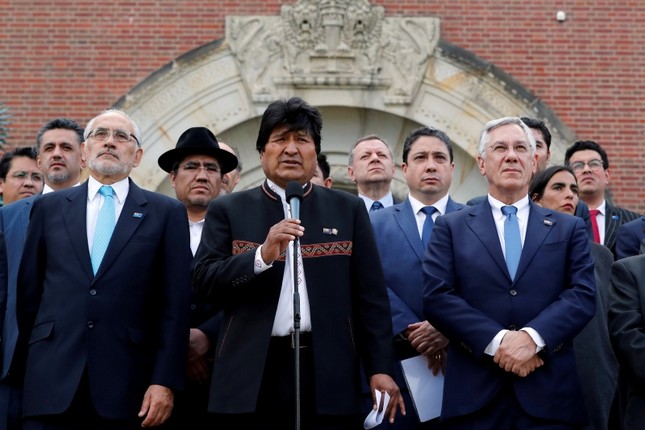 Evo Morales also reiterated that the seas and oceans were the common heritage of humanity.

The court concluded that none of the instruments (six bilateral discourses between Bolivia and Chile) invoked by Bolivia established an obligation on Chile to negotiate Bolivia’s sovereign access to the ocean. Despite the clear ruling, the ICJ invited both countries to voluntarily conduct a dialogue “in a spirit of good neighborliness” to find a solution to the Bolivian demand.

Despite the unfavorable ruling, Bolivian President Evo Morales, while speaking to the media immediately after the verdict, responded with optimism and said that “while there is no obligation to negotiate, there is an invocation to continue the dialogue,” adding that Bolivia “will never give up” pursuing its claims for sovereign access to the Pacific Ocean. Meanwhile, Chilean President Sebastián Pinera said that his country would be ready for dialogue with Bolivia but without compromising on its territorial sovereignty and within the framework of respect for existing treaties.

Earlier, the Bolivian vice-minister of external affairs, Carmen Almendras, during a meeting of landlocked countries held in New York, said that the inaccessibility to the sea had caused great economic and social losses for Bolivia. “Bolivia’s economic and social development has been affected for more than a century as a result of the lack of its own and effective access to the sea”, she said.

After the hearing, a small crowd of Bolivians protested outside the Peace Palace at Hague, shouting “The struggle continues!”. Earlier, Evo Morales, in multiple tweets on September 29, said Bolivia had approached the ICJ seeking a peaceful solution. He also reiterated that the seas and oceans were the common heritage of humanity. He appealed to the Chilean people to not to see Bolivia’s plea in the ICJ as an unfriendly action. Bolivia had won a preliminary victory two years ago in September 2015, when the ICJ declared that the matter was under its jurisdiction, and accepted Bolivia’s case, dismissing Chile’s objection.

On October 2, Morales talked about the verdict once again at a press conference in La Paz. He said he was surprised by the verdict, adding that it had many contradictions. He pointed out that the court had acknowledged that Bolivia was born with access to the sea. He also stressed that the Organization of American States (OAS) had resolved 11 times to negotiate an access to sea and thrice, it had been accepted by the Chilean minister of external affairs. However, the court hadn’t taken this into account.

“We respect (the ruling) but we don’t share it. The historic demand of the maritime claim is reaffirmed with more strength and conviction because we are with the truth, history and we are right”, he added. The president also announced that he would send a letter to the United Nations to demonstrate the “huge contradictions” in the recent ruling. In the end, he reiterated that Bolivia would abide by the ruling and expressed the hope that Chile would initiate dialogue as suggested by the court.

Bolivia lost its access to the ocean when it was defeated in a war with Chile in 1879 (War of Pacific). The Treaty of Valparaiso in 1884 formalized it. Bolivia and Peru fought the war against Chile over the latter’s claim on the nitrate-rich northern territory in Atacama. In the peace deal with Chile in 1904 (Treaty of Peace and Friendship), Bolivia officially ceded the Antofagasta region to Chile in return for tax-free access to Chile’s Arica port and the construction of the Arica-La Paz railroad network. Since then, Bolivia has been demanding direct access to the sea as it sees it as crucial to its development. After the peace accord of 1904, further talks were held between Chile and Bolivia in the 1970s. Another round was initiated by Morales and Chilean president Michelle Bachelet in 2006. Bolivia filed a lawsuit in the International Court of Justice in April 24, 2013, seeking to force Chile to come to the negotiating table on the issue. Bolivia has accused Chile of not complying with diplomatic promises and obligations, such as the land corridor to the sea and a sovereign port.