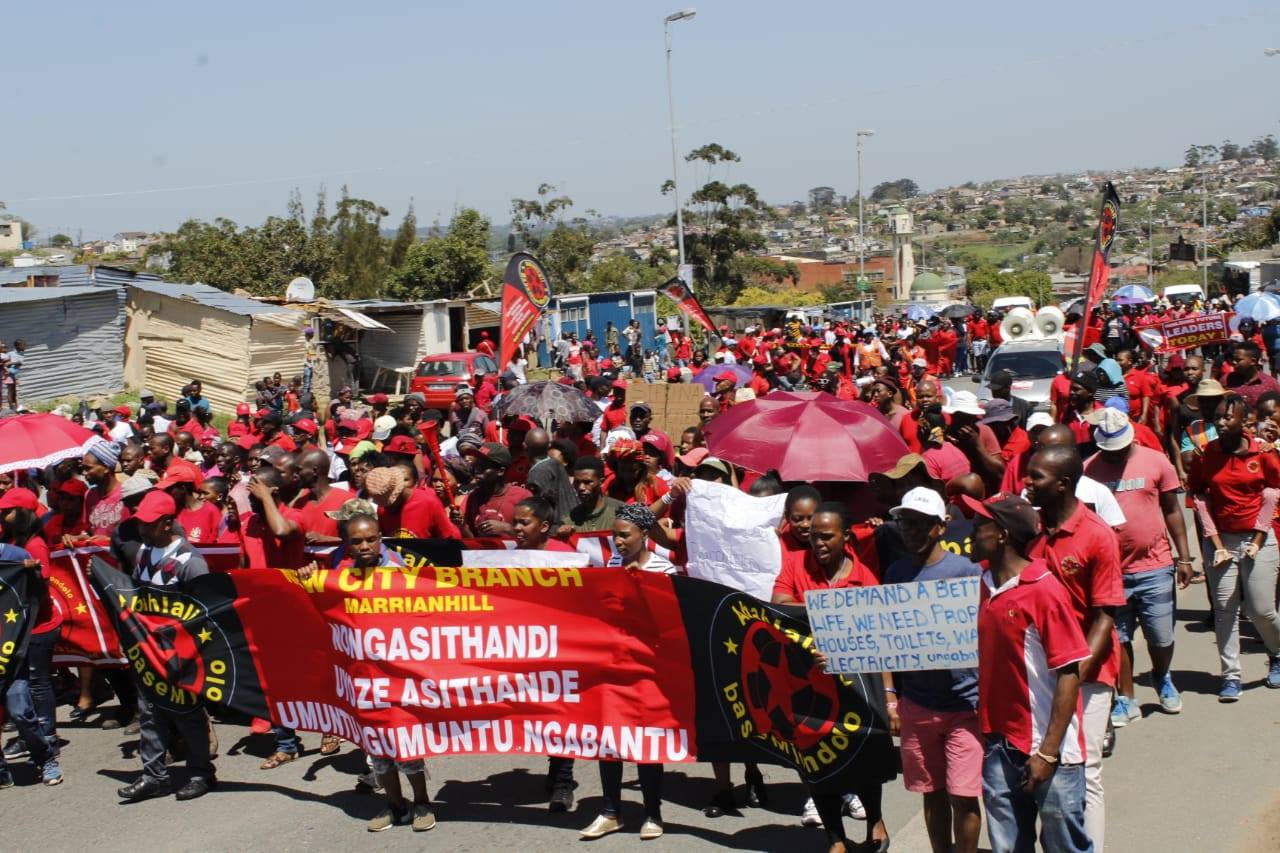 Abahlali baseMjondolo movement in a mobilization.

Members and allies of Abahlali baseMjondolo, the movement of shack dwellers in South Africa, will march against repression on Monday, October 8. Abahlali, which has over 50,000 members, is the largest social movement in South Africa, and since its founding in 2005, has faced serious repression with its members and leaders killed, threatened or incarcerated. The movement’s land occupations have also been violently evicted.

The repression against the movement has seen a sharp increase in the last year. On May 22, 2018 S’fiso Ngcobo, a local chairperson of the movement, was assassinated in eKukhayeni, in Marianhill outside Durban. His assassination occurred three days after the eKukhanyeni branch held a well-attended mass meeting.

Since early July, Abahlali has been denouncing the grave threats against the life of the president of the movement, S’bu Zikode, by high-level functionaries, including the Mayor of Durban and the chief whip in the eThekwini council.

The threats escalated to such a level that on August 20, Zikode was forced to go underground. Abahlali announced in a press statement: “We have had credible reports from various sources, including in the ANC and the police, that S’bu Zikode is in imminent danger of assassination. One again, he has had to go underground. For some time now, he has been in a secret location, away from all cell phones and out of contact with his family. We have also put in place the most rigorous possible security measures to protect other people who are under threat but many people, including anyone who puts their name on one of our statements, continue to operate at serious risk.”

The threats and attacks on individuals have been accompanied by a more general campaign of attacks and threats against Abahlali land occupations, media slander campaigns, calling members of the movement vandals, and state repression against their protests and marches.

In a statement released about the march, Abahlali makes it very clear where the attacks are coming from: “This repression comes from a very clear source – the ANC. The Anti-Land Invasion Unit and the police are part of the state that is controlled by the ANC…The repression that we have faced, and continue to face, places huge strain on our movement, and on families and individuals. The ANC have exploited the fact that we are being forced to operate in crisis mode to try and infiltrate our movement. They have not succeeded. Open democratic practices, and especially open assemblies in which everyone can speak freely, are our best defence against infiltration. The ANC in Durban operates like a mafia. There is no distinction between criminality and politics. The rest of the country needs to understand this clearly and to face this directly. ”

The National Union of Metalworkers of South Africa (NUMSA) announced that they will be marching today in solidarity with Abahlali baseMjondolo in Durban: “We stand in solidarity with the landless peoples’ movement and their struggle for land and dignity of the working class and the poor of South Africa. We condemn the ANC government and all other unprogressive forces which are actively colluding to silence the genuine voice of the working class and the poor in our country, by using violence and oppression…NUMSA will march in solidarity to demand an end to state sponsored repression and violence against this movement and all other progressive working class organisations. We demand the right to freedom of association and the right to freely organise. We demand that all political murders of the members of the movement be properly investigated. We demand that all death threats made by eThekwini officials including the Mayor be investigated, and those responsible must be arrested!,” a statement from NUMSA said.

Solidarity protests will be held in Cape Town, Johannesburg and New York.