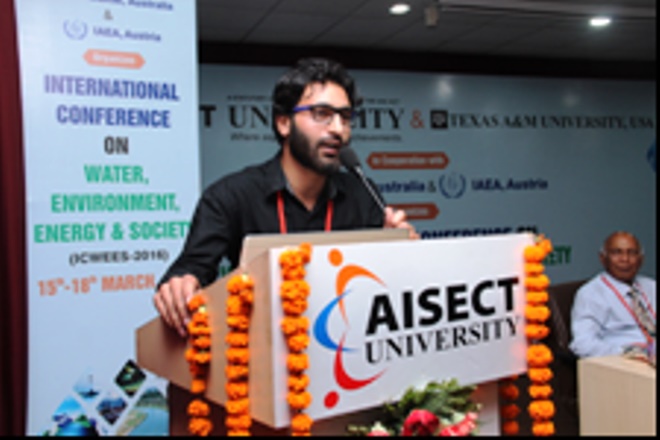 Mannan Wani was pursuing his Ph.D in geology before he became a prominent presence in the militancy.

Mannan Wani, a 27-year-old scholar, who left his doctoral studies earlier this year to take up arms against the Indian state, was killed along with his accomplice in southern Kashmir. His death early on October 11 at Shalgund village led to tension. Mass protests were reported from different parts of the region. Scores of youth were reportedly injured during these protests. An internet shutdown was enforced in the region.

The police confirmed the death of Wani and Ashiq of Tulwari Langate area. Before joining the militancy, Mannan was pursuing a Ph. D in applied geology from Aligarh Muslim University, one of oldest modern universities in South Asia. On January 5, 2018, a picture of him carrying a barrel grenade launcher went viral on social media. Intelligence agencies later told his family that he had the joined the ranks of the militancy.

Hailing from Kupwara’s Lolab, Wani was an accomplished scholar, winning an award for a paper on ‘Water, Environment, Ecology and Society’ at an international conference in 2016. He was also active in student politics in AMU. “I happen to meet him during a seminar in 2014. He was bright and a good organizer. What pushed him to take up arms, is the question we need to ask ourselves. And why he realized there is no other way,” Gautam Navlakha, a prominent human rights activist, said at a conference in April 2018.

Wani was a prominent presence in the militancy and people had begun comparing him to the fallen commander Burhan Wani. Months after joining the militancy, he penned two open letters, explaining his decision: “Resistance is resistance; it can neither be peaceful nor violent. In fact, [the] violence is not that we have picked up guns to fight occupation but violence is the presence of more than 12 lakh Indian armed men in Kashmir, violence is the presence of fortified army garrisons, bunkers and pickets, and occupation in itself is the biggest violence,” he wrote in July 2018.

Similarly, in another letter (available here) in September 2018, he discussed how outsiders fail to understand the meaning of living in a militarized zone. “A place where the interests of the occupier run supreme and undeclared war on a civilian population is the modus operandi… restoring the dignity of one’s own self by a non-violent culture is a false hope. When the occupier is uncivilized, its collective conscience is blood thirsty, its morality is deceit, its mindset is hegemonic and it thinks through the barrel of gun, the response cannot be peace talks, it has to be to crush her arrogance.”

Soon after media reports confirmed his death, member of the legislative assembly Rashid Ahmad of the Awami Ittehad Party stated the incident negated governor Satpal Malik’s statement that government should focus on eliminating militancy rather killing militants. He said that instead of using bullets and pellets to disperse thousands of protesters at the encounter site, the government should introspect on what was pushing these people to risk their lives.

“Eliminating him using bullets has only reinforced his arguments. Though he was holding a gun, his thought-provoking writing won’t be silenced using a gun. For the deep state it will take long time to defeat his arguments,” Rashid told reporters.

The Joint Resistance Leadership of Kashmir, in a statement, called for a strike and a  complete shutdown on October 12.