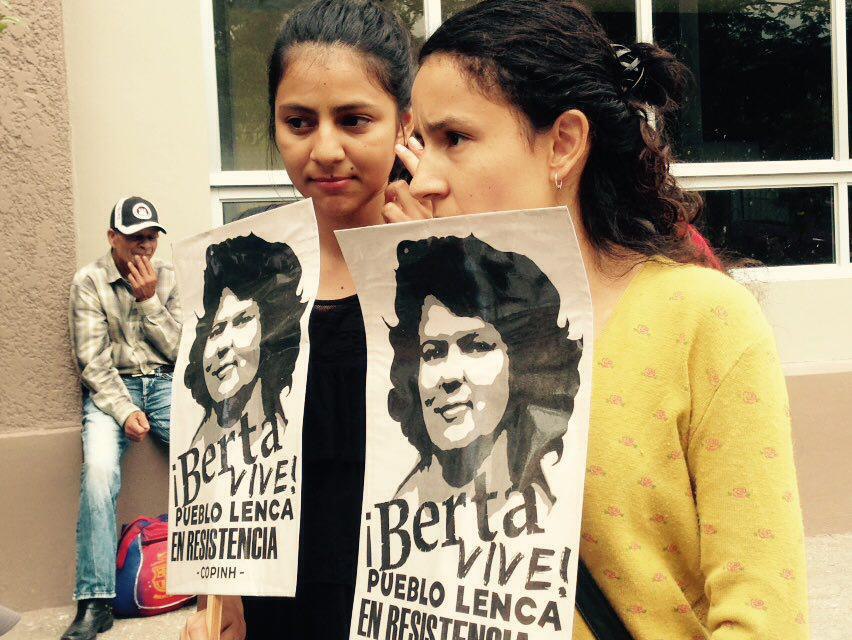 Laura Zúniga and Bertha Zúngia, members of COPINH and daughters of Berta Cáceres outside the court on Monday. Photo: COPINH

Yesterday October 15, the trial in the Berta Cáceres case was poised to resume after a month of suspension. Before the proceedings began, the victim’s legal team presented a denouncement to the Attorney General’s Office denouncing the appeals court for falsifying information, as they gave the go ahead for the trial to resume while there were still appeals around the process itself pending. As such, after several hours the court announced the suspension of the trial for a second time.

Due to systematic irregularities and the failure of the judges to guarantee the rights of the victims in the case, on the day the trial was originally set to begin, on September 17, the legal team of the family of Berta and the Civic Council of Popular and Indigenous Organizations in Honduras (COPINH) filed a legal action to disqualify the judges of the court hearing the case. After receiving the action, the court announced on the same day that the trial would be suspended until they resolved the petition. In the following days the court rejected this request, but the victim’s legal team is currently appealing the decision in the Appeals Court along with several other legal injunctions presented by not only their legal team but also by the defense.

Several of the appeals filed by the victim’s legal team have to do with the court’s refusal to guarantee conditions that allow for Cáceres’ assassination to be considered in the context in which it occurred. The rejection of the status of victimhood to COPINH, the organization that Berta co-founded and was general coordinator of at the time of her assassination is one such example. The rejection of evidence which implicates and would call to testimony high-level functionaries of the DESA company and of shareholders of the company is another.

Berta Cáceres was working as the general coordinator of COPINH when she was assassinated by hitmen on March 2, 2016. Since 2013, Berta and COPINH had been working with the community of Río Blanco, resisting the Agua Zarca hydroelectric project that the Honduran company DESA (Desarrollos Energéticos S.A.) was trying to build on the Gualcarque River that is sacred to the Lenca community. The project had significant funding and support from several international banks and institutions like FinnFund, FMO, World Bank, and USAID.

During the month while the case was suspended, DESA (Desarrollos Energéticos S.A.) wasted no time in intensifying its attacks on COPINH and even the figure of Berta Cáceres herself.

In July, a report was released by Canadian defense lawyer Brian Greenspan whose purpose was to delegitimize the report released by the GAIPE (Grupo Asesor Internacional de Personas Expertas, International Advisory Group of Experts) and COPINH on October 31, 2017. The GAIPE report, with deep investigation, research, and interviews conducted in Honduras concluded that executives of the company DESA (the Hydroelectric company which held the concession of the Agua Zarca project) and agents of the Honduran state colluded in “the planning, execution and cover-up” of the 2016 assassination of Berta Cáceres. Greenspan produced the counter report with Amsterdam & Partners LLP.

Amsterdam & Partners LLP is an international law firm based in London and Washington DC. According to their website they “proactively manage disputes and crises before they become shocks, damaging the reputation and/or negatively impacting the bottom line of businesses.” This firm was hired by the DESA company to help defend the company’s name and help the defense of the DESA employees and executives that have been arrested in relation to the assassination of Berta Cáceres.

Amsterdam & Partners LLP founder Robert Amsterdam stated about the ‘Greenspan report’: “The GAIPE report almost singlehandedly shaped what we have all been reading about the Berta Cáceres murder for more than a year now…Based on that report, many NGOs, who, frankly, should know better, have been quick to prejudge the Cáceres case, but as the Greenspan Report makes clear, they have done so without credible evidence and with gross disregard for the legal rights of DESA’s employees.”

Last week, the Spanish newspaper El Comercial published an interview with Amsterdam titled: “In the Berta Cáceres case, the NGOs support without knowing, a criminal organization”. In the interview Amsterdam defames COPINH for being against progress and “renewable energy”, for twisting the will of the local community, for causing the loss of millions of dollars invested into the Agua Zarca hydroelectric project with their protests, and above all denounces COPINH for slandering DESA and unjustly accusing them of being responsible for the assassination.

Amsterdam also published a full page opinion piece in Honduran daily El Heraldo on Sunday October 14, the day before the trial was set to resume, titled “What is the real agenda of COPINH”. In this piece, he  attacks COPINH for “lying” and “making up evidence” in their campaign against DESA. “In this case, COPINH has put its own agenda above the most fundamental human rights…they are using the assassination of Berta Cáceres for political goals, at the cost of justice.”

The accusations this lawyer makes against Berta’s daughters, son, mother and comrades of COPINH are unfounded and the motives are transparent. Amsterdam works to defend the rich and powerful to save their names and keep them out of prison. It is also very telling that DESA and its partners would rather spend millions of dollars on expensive international firms then to face justice for the crime that they have been proven to commit.

Bertha Zúniga, the current coordinator of COPINH and one of Berta Cáceres’ daughters, wrote on her public facebook page: “To Amsterdam and Partners: COPINH does not “lobby”, we don’t even know what that is. The world does not doubt that DESA is my mom’s murderer, it’s simple and clear “there is no force in the world capable of crushing the force of truth and ideas”, and all of the money Atala family is investing in paying you and your public relations company will be a failure.”

As COPINH and Berta’s family ward off attacks by international lawyer firms, it continues strong in its demands for a fair trial and justice for their leader Berta Cáceres. In theory, the trial will resume when all of the appeals and legal injunctions have been addressed. One date which has been putting pressure on the proceedings is that on November 2nd, the preventative prison will expire for four of the eight defendants who are implicated in this current trial. However, even if the trial resumes tomorrow, due to the complexity of the case it is likely that four defendants may be defending themselves in liberty.