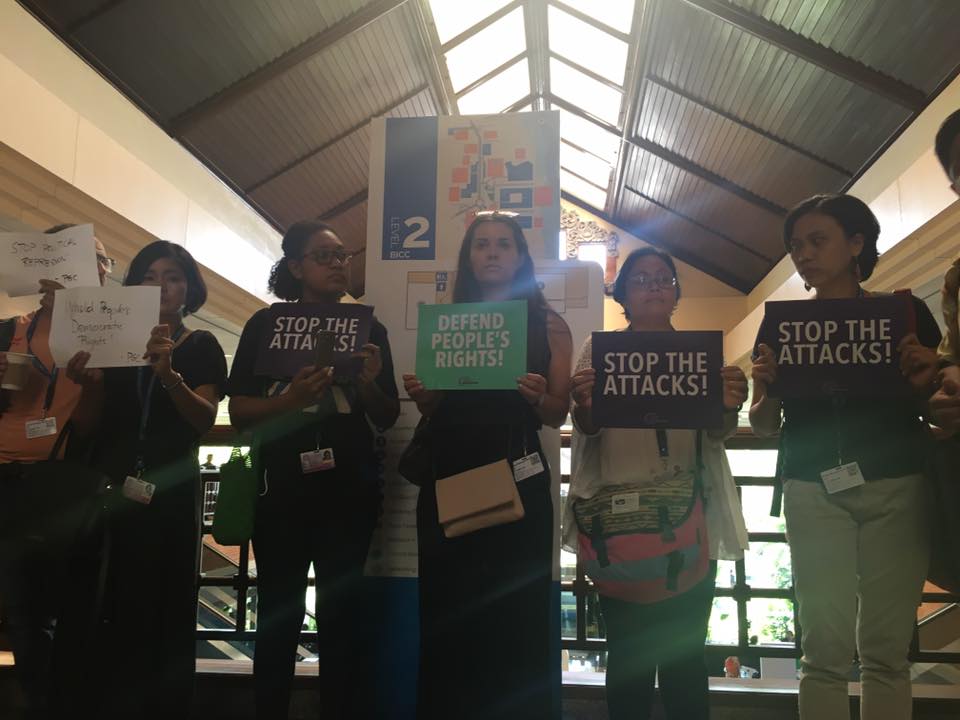 Indonesian authorities decided to shut down civil society event Peoples’ Global Conference that was to begin on the sidelines of World Bank and IMF annual meetings in Bali, Indonesia. (Photo: APWLD)

“Shut down the IMF-World Bank, not people’s dissent! Fight for people’s right to development!” the slogans reverberated around the venue of the annual meetings of the International Monetary Fund (IMF) and the World Bank (WB) Group which were held from October 12-14 in Bali, Indonesia.People’s movements and organisations from across the globe united in Bali, demanding an end to corporate-led agendas. The movements registered their resistance by organising a People’s Global Conference (PGC) against IMF-WB at the sidelines of the meeting.

The objective of PGC was to expose how the neo-liberal agenda of these international financial institutions has adversely impacted the working class and the poor in the nations they have intervened in.

But these peaceful initiatives were seen as a threat by the Indonesian government, which came down heavily on these events, including measures such as deploying of security forces to stop them from being carried out. Multiple events had to be cancelled due to the pressurising tactics employed by government forces and their intelligence agencies, widely condemned by activists as a direct obstruction to their right to free speech and peaceful assembly.

The Indonesian police and the IMF-World Bank cap the Annual Meeting in Bali with more violence. Protesters near the Nusa Dua, Bali are being rounded up and arrested

“Peasant women face the worst of this industrial model, that is heavy on use of chemical inputs. This shift in the way we do agriculture came about largely due to conditions put forth by IMF and World Bank while giving loans,” explained Jeongyeol Kim from Korean Women Peasants’ Association in a press release issued by La Via Campesina speaking about the South Korea agricultural policies.

La Via Campesina is  a global peasant movement consisting of organisations from 81 countries, which also participated in the PGC in Bali, on the sidelines of the IMF-WB meet.

These two institutions, also collectively known as the Bretton Woods Institutions, have since their inception in 1944 after the Second World War, provided loans to various nations to assist in post-war reconstruction as well as “development” of third world countries. But the loans have always been accompanied with imposition of conditions that only served to further the interests of private capital. Borrower countries have had to conform with IMF’s demands – structural adjustment program – of liberalising trade, privatising state services and resources, and deregulating laws meant to ensure labour rights and other essential services. Many countries have lost their food sovereignty, with food production being increasingly pushed towards profits and export needs, and some have even had to privatise very basic requirements, such as water.

Indonesia, the host country, is one such nation which underwent privatisation of water in 1997 in various regions, on the suggestion of World Bank. “Since then, the citizens, especially the poor, have continuously experienced water-related crises. Water is not accessible for all, as people have to pay very high rates for this basic necessity,” said Dinda Nuur Anisaa Yura from Solidaritas Perempuan (Women’s Solidarity for Human Rights), a women’s led movement fighting against privatisation, to Peoples Dispatch in an interview.

“Sometimes, people have to wait until midnight for water and usually, women take up this responsibility because they believe men have to go to work the next morning and the children have to go to the schools. In addition, the quality of water supplied is not good and it affects the reproductive health of women,”  Dinda added.

However, the history of World Bank and IMF intervention in the nation began much before that, and was instrumental in shaping the country’s traumatised past. The second ever loan granted by the World Bank went to Netherlands in 1947, which at the time had launched a massive offensive against Indonesian people fighting their for their independence from the Dutch empire. While World Bank defended their aid as being meant for war recovery efforts, the fund supported Netherland’s ‘colonial war’ in Indonesia.

Elsewhere in the world too, IMF-WB have repeatedly pushed for measures that would allow private sector to rake up profits by pushing the marginalised even further from their rights, by extracting natural resources through land and ocean grabbing, and isolating these private companies from the fallout of their policies. While the declared agenda is development to be carried out by the private sector (primarily public-private partnerships or PPPs) when public funds fall short, it is telling that the key indicator of success of any project is “business performance”, and not any measure of improved lives. It is these same PPPs that later rob the government, making it further weaker and dependent on the same institutes.

How the IMF-WB is pushing for Privatisation and Deregulation?

Concerns have also been raised over the points mentioned in the World Development Report 2019 by the World Bank, titled The Changing Nature of Work, which was launched during these meetings. The report undermines the threat automation poses to employment, arguing that jobs lost to automation will give way to new ones as the nature of work changes. This argument fails to address that in an increasingly automated economy, workers will need more specialised skill sets to remain relevant, which they are currently failing to achieve. And the responsibility of this also lies with privatised education systems that only cater to limited parts of the population, and prosper at the cost of funds being taken away from public education, often at the behest of IMF-WB prerequisites to loans.

The report also pushes towards deregulation of labour laws as a solution to accommodate this changing nature of work, and financing of social security measures through levying taxes such as VAT (value added tax) and cutting subsidies.

International Trade Union Confederation (ITUC) General Secretary Sharan Burrow responded to the report by saying, “the recommendations to shift taxation from companies to consumers and to slash business regulation is reminiscent of the pro-deregulation drum-beating that we have been accustomed to reading in the Bank’s annual ‘Doing Business’ report for fifteen years. It is astonishing that the World Bank would allow the same right-wing ideology to permeate what is supposed to be its contribution to the debate on the future of work.”

It has been noted that these two institutes not only create conducive conditions for private transnational companies (TNCs) to take up development projects, but also invest directly into the industries that carry out these projects, subsequently gaining direct profits.

“Time has come to build a people’s banking system based on principles of solidarity, trust, mutual respect and co-operation, which can replace the current system of International Financial Institutions. None of these institutions have any legitimacy left to represent the needs and interests of peasants, workers, indigenous people or fishers. They must go!,” Jeongyeol said

The People’s Global Conference also sought to present an alternative to the coercive techniques employed by IMF-WB under the farce of aiding development which would actually be inclusive of the rights of the working class and poor, without undermining the sovereignty of governments, and without handing over development to TNCs whose primary agenda is profits, not service.