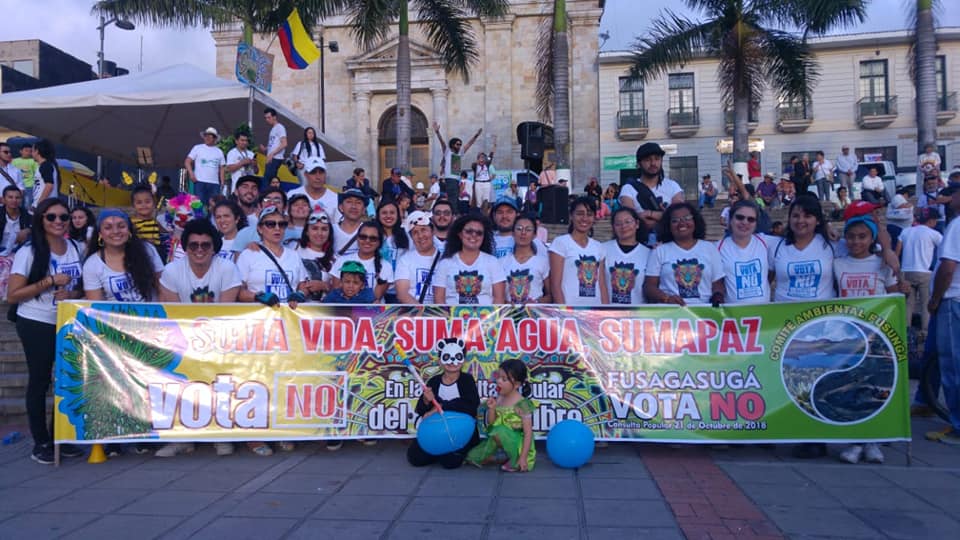 On October 21, more than 39,000 people took part in the popular consultation in the municipality of Fusagasugá and 99% said NO to fracking and hydrocarbon exploration. The victory comes just almost two weeks after the Constitutional Court of Colombia ruled that popular consultations could not prohibit extractive projects.

The questioned posed to the community of Fusagasugá was: “Do you agree, yes or no, that the activities of exploration, drilling and production of hydrocarbons, fracking and large-scale mining should be carried out in the municipality of Fusagasugá?” With an overwhelming majority of 39,175 (99.49%) votes against and only 202 (0.51%) in favor, the citizens of Fusa decisively rejected hydrocarbon exploration. 35,000 people had to vote in order for the consultation to be valid. Out of 104,540 inhabitants, more than 39,000 took part and voted in this popular referendum.

Nearly two weeks ago, the constitutional court of Colombia ruled that the popular consultations could not be invoked to veto or restrain extractive projects as the subsoil belonged to the nation. However, preparations for the popular referendum were already in progress when the court’s decision came out. On this same day, the municipality of San Bernardo had also planned to carry out a popular referendum with the same focus, but it was suspended by the council of state.

So far, nine such popular referendums have been carried out in different regions of Colombia and in eight of them, the community has voted against the extractive projects of private companies. Earlier verdicts by the constitutional court had established that popular consultations were processes that could prohibit mining in the respective territories, but in the most recent case, the court ruled in favor of the multinational Mansarovar Energy and overturned previous rulings.

The municipality of Fusagasugá decided to go to the polls to protect the Páramo de Sumapaz , a fragile ecosystem unique to South America. Fusagasugá is one of the 10 municipalities in the province of Sumapaz, a subregion in the southwest of Cundinamarca. According to the National Natural Parks of Colombia, Sumapaz is a mountainous region rich in resources and species that makes it an important reservoir of biological, ecological and genetic diversity. It is also an essential ecosystem for the water regulation of three important rivers in Colombia: the Meta, the Guaviare and the Magdalena. Spanning 333,420 hectares, it is the largest páramo in the world. The community has raised concerns that the exploration of oil could affect this ecosystem. Municipalities such as Pasca, Arbeláez and Pandi have also opposed such large-scale extractive activities.

Gustavo Petro, left-wing presidential candidate in the recent elections and an active spokesperson against the mining industry for years, welcomed the outcome of the process. “I congratulate the citizens of Fusagasugá. You all have taught Colombia how to defend water and life. You all have said No to fracking”, he tweeted.

The decision of the constitutional court has not yet been published. Therefore, there is still hope that the verdict of the people with respect to hydrocarbon exploration will be respected.