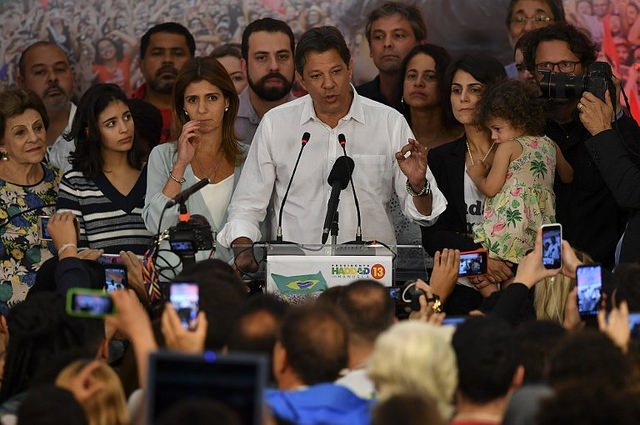 Speaking after the elections, Fernando Haddad said they would be the opposition that fought for the rights of the people of Brazil

On Sunday, October 28, Jair Bolsonaro, the extreme right-wing candidate of the Social Liberal Party won the presidential election with 55.3% of the vote, while Fernando Haddad of the Workers Party came second with 44.7% of the vote. This election was one of the most polarized in Brazil’s history and  saw two opposing projects for Brazil at odds – one that rallied people around hate and fear while the other sought to save Brazilian democracy, freedom and rights.

Bolsonaro’s victory has shaken people in Brazil and across the world, as he is someone who openly encourages people to buy guns, declares with no qualms his hatred of Black people, LGBTQ people, Indigenous people, the poor and working class. He has also termed as terrorist organizations some of Brazil’s most powerful and historic social movements. His open fascist discourse has unleashed a powerful and terrifying precedent in Brazil, and the fear for many is not only violence from the state, but also those Bolsonaro supporters who now feel their intolerance and violence is acceptable.

It is important when talking about the extreme right-wing’s victory to remember that until recently,  former president Luiz Inácio Lula da Silva was the frontrunner in the polls. He was in the midst of his caravan for Brazil – a pre-presidential campaign seeking to speak to the people and build a platform based on their needs and realities – when the justice system accelerated the legal proceedings against him and sentenced him to 12 years in jail. The habeas corpus plea presented by his legal team was rejected by the court and he was asked to turn himself in to the police in Curitíba. Since April , Lula has been incarcerated despite the enormous irregularities, inconsistencies and lack of hard evidence in his case. His imprisonment was seen by many as a way to take him out of the presidential race. However, even from prison, the bid to keep Lula’s candidacy alive continued. On August 15, accompanied by thousands of MST militants who marched for five days, Lula’s candidacy was registered in Brasilia. The United Nations Human Rights Commission even specifically requested the Brazilian state to ensure that the full political rights of Lula were respected. However, over a week later, the supreme electoral tribunal rejected Lula’s candidacy. In the aftermath of this, former education minister Fernando Haddad became the Workers Party (PT candidate), with Manuela d’Avila of the Communist Party of Brazil running for vice-president.

Over the past few months, the Haddad-led campaign waged a fierce struggle against Bolsonaro, who after the disqualification of Lula began leading the polls, However, despite a valiant mobilization by social movements and various sectors of the marginalized, Bolsonaro, who was supported by the most conservative sections of society and the agri-business and gun lobbies, among others, managed to win the election

Despite this setback, the social movements of Brazil have vowed to continue the resistance.

João Pedro Stedile, of the national board of the Landless Rural Workers’ Movement (MST), said, “We emerge from this process with closer ties and the organized capacity and force to resist the fascist offensive.” He added, “We have to have a new debate in the country, about the new sovereign project for a equal and just society. This campaign was based on lies and the struggle against lies. We couldn’t even discuss programs or the structural project for the country. Now, we have to return to this debate and during the next months and years, rebuild a peoples’ unity around a project. [We must build] a program of solutions for the people, because otherwise, the government will not turn around.

After the results were released, João Paulo Rodrigues, also of the national board of MST, spoke on MST’s social media, “President Lula is not alone, and we can’t allow that this coup and the authoritarian government to keep him prisoner for more time. The coup supporters and this authoritarian government will probably persecute the peoples’ movements, the militants of trade unions and of the MST. But the MST are not cowards, it will not be intimidated by the shouting of Bolsonaro, it will be in the trenches of struggle.”

Haddad too spoke about the task ahead. “Civil rights, political rights, workers’ rights and social rights are at risk at this moment. We have a responsibility to be the opposition that puts the national interests and interests of the Brazilian people above everything. We will help build one of the best democracies in the world,” he said.