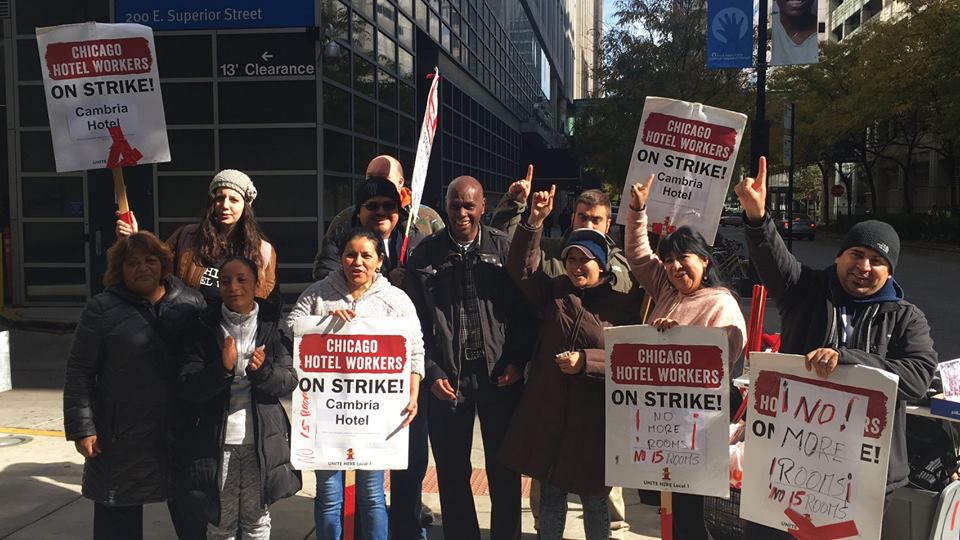 Workers at the Cambria Hotel Chicago Magnificent Mile have been on strike since September 7, demanding year-round health insurance, pension, higher wages, decreased workload, job security and protective measures against racial discrimination and sexual harassment. They are among the 6,000 workers who struck work last month in 26 hotels in the city over similar demands. Agreements were reached between the management and the workers in 25 of the hotels.

Many hotels resorted to not paying health insurance for workers during the winter months when business is slow. Often, workers are also laid off during that time of the year.

In the 25 hotels where agreements were reached, new contracts were drawn up which addressed some of the key demands of workers. Workers began the strike soon after their contracts expired on August 31. The workers are part of the UNITE HERE Local 1 union, which represents approximately 16,000 hospitality workers in the Chicago area.

The action began with a walkout by workers just prior to their shifts. Subsequently, workers formed large picket lines and held mass public rallies in front of the hotels to draw attention to their demands.

A wide range of hotel employees, such as housekeepers, servers, cooks, bellhops, bartenders and doormen participated in the strike. The strike venues were sites of celebration with workers banging drums, chanting slogans, singing and dancing, so as to keep the morale of workers high, and to encourage them to continue their struggle till their demands were met.

Workers and unions pointed out that hotels in Chicago have been doing very well financially, with a record number of visitors and $ 2.3 billion worth of revenues in the last one year.

On October 22, UNITE HERE filed a federal lawsuit against the city and police department accusing them of violating the first amendment rights of workers by imposing noise restrictions on striking and picketing.