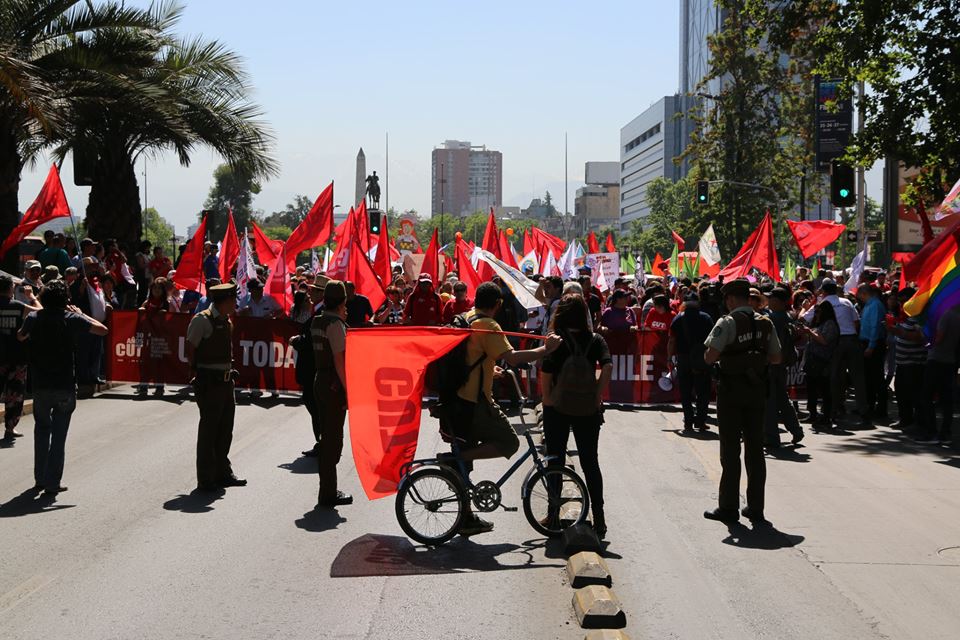 On November 8, hundreds of thousands of Chilean workers organised a massive rally in Santiago as part of their national strike. The call for strike was given by Worker’s United Centre of Chile (CUT) demanding an increase in wages, equal pay, decent pensions, decent housing, quality public health, protection from workplace abuse, etc. They also protested against massive layoffs, pro-rich tax reforms, pension reforms, and the overall labour policy of Chilean president Sebastian Piñera. Several trade unions and student federations attended the march. Similar rallies were held in 40 other locations across the country.

While addressing the huge gathering at Santiago on Thursday, Barbara Figueroa, president of the Worker’s United Center of Chile, said, “The commitment of the CUT and all of us here is to continue advancing in unity and fight for the hope of a fairer Chile (…) and not continue to deceive ourselves with the pyrotechnics and show business that the Government puts us at the forefront of, ignoring the real debates about what Chile wants: Chile wants jobs, it wants decent wages, it wants growth with equity, it wants more and better social protection, it wants more State. That’s what Chile wants and that is why they have the Worker’s United Center and all the social and political actors that are represented here to defend those interests and put us at the forefront of the social struggle. ”

The Chilean Communist Party (PCCh) also expressed support for the Active National Strike called by the Unitary Workers Union. Guillermo Teillier: the president of the PCCh, in his statement to Radio Nuevo Mundo said that “the National Strike should inspire the opposition forces in Chile to unite not only for political purposes, but also as a way to stop the “predatory” attitude of the right-wing in power, which seeks to dismantle and reverse social rights won by citizens”.

“It is fair and legitimate that workers take to the streets to protest against a permanent policy of this government of the Right, which has shown in its tax and social security projects, that it has no real interest in favoring the the vast majority of Chileans, but on the contrary only seeks to consolidate a model put at the service of large economic groups” Teillier added.

In the gathering in Santiago, Rodrigo Rivera, spokesman of the Confederation of the Chilean Students, said, “Chile has a government that continues with the logic of indebtedness.”

According to reports, around 7,000 people marched in Valparaiso, 6,000 in Concepción, 3,000 in Coronel, 2,500 in Arauco, and around 3,000 workers gathered in Puerto Montt to participate in the strike. There are reports that at some places including Antofagasta, the workers were met with police repression and several workers and students were also detained. Human rights activists, unions, students, and political organizations including the Frente Amplio and Revolutionary Workers Communist Party condemned the repressive actions of the police in a joint statement and demanded the immediate release of the detained workers and students.

They declared in their joint statement that, “This way of operating Carabineros [Chilean national police force] is not a coincidence, it is part of the agenda of the Right that has the luxury of suppressing the demonstrations of the workers in the purest style of the dictatorship, and since the Government took office with the businessmen, it is promoting attacks on workers with dismissals and company closures, with laws that seek to criminalize the student movement.”

Chile’s right-wing president Sebastian Piñera, since the inauguration of his regime, has been widely criticized from the progressive sections of the society for his admiration for Pinochet and for his pro-rich, market oriented policies. In April, around 10,000 people marched in Santiago demanding the termination of Pinochet-era privatised pension system known as Administradoras de Fondos de Pensiones (AFP). According to reports, the pension system which manages US$170 billion in funds, has been widely criticised for the meagre returns to pensioners, who had been promised annual returns worth 70% of their last salary. Even though in September, CUT and parliament members from the Left parties had jointly given a representation to president Piñera demanding a minimum wage legislation, that too remain unaddressed till this date.