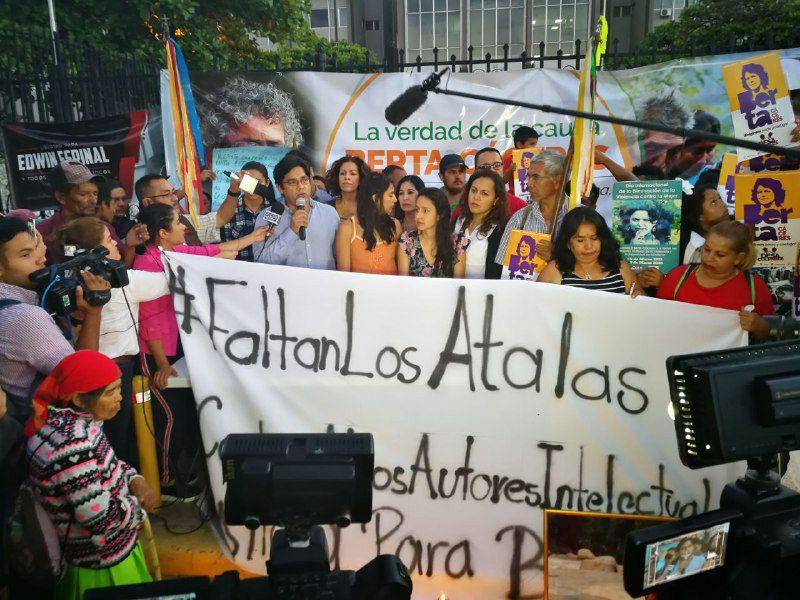 Yesterday November 29, 2018 the convictions were announced for the eight men who have been on trial in the past month accused of participating in the assassination of Honduran environmental and indigenous activist Berta Cáceres. Sergio Rodríguez, Mariano Díaz, Douglas Bustillo, Elvin Heriberto Rápalo, Edilson Duarte, Oscar Haroldo Torres and Henry Javier Hernández were all convicted of the assassination of Berta Cáceres.

Still, Cáceres’ family and her organization COPINH stated in a press conference after the verdict was announced that their demand for justice goes further than just convicting the hitmen, they demand that the full truth behind the assassination come out and the powerful people who ordered this heinous crime are brought to justice.

Furthermore, they reminded the public that although the convictions were favorable they occur in a context wherein the victims themselves and their legal representation were excluded from the proceedings. While the attempts by them to present evidence pointing to the larger criminal structure and call in individuals to testify from the Atala Zablah family, who have an ownership stake in the DESA corporation, were rejected.

“During the trial we, along with international observers, diplomats and the press, bore witness to the telephone communications that show this participation [of the Atala Zablah family]. This also made it clear that the criminal acts committed by the DESA corporation under the leadership of this family go beyond the assassination and comprise a series of crimes carried out against Berta Cáceres, COPINH, the Lenca people and the public administration and state of Honduras,” they stated.

Beyond gaining justice in the concrete case of Berta Cáceres’ assassination and persecution, Berta’s family, COPINH, and their legal team are fighting to create a legal precedent for all leaders and activists who are assassinated for their struggle in a country where impunity and corruption rule over justice and humanity: “The impunity that the masterminds of this crime continue to enjoy is part of the plot of corruption and violence that sustains the model of extraction that plunders our peoples. As victims, and other people, communities and organizations we commit to continue confronting it, like Berta Cáceres did, until dignity, truth and justice prevail in this case and in all of the struggles that are being waged right now throughout Honduras and the world.”

They have vowed that “the struggle for justice for Berta Cáceres and the Lenca people does not end with the chapter that closes today, the convictions of the lowest layer of the criminal structure, with which the Honduran state seeks to silence the demand for justice. On the contrary, we are deepening our efforts.”

Who are some of the convicted in the assassination?

Douglas Geovany Bustillo: chief of security of the President of Congress (2003-2005), Lieutenant of the Fifth Batallion of the National Army of Honduras (2004-2006), Chief of Security of DESA until June 2015. He was in charge of coordinating directly with David Castillo (President of DESA), with the state security forces and paramilitary groups to carry out surveillance, infiltration, attacks and arrests of members of COPINH. He led the failed assassination attempt of Berta Cáceres on February 5 and 6, 2016. He also planned, supervised and directed in real time the operative on March 2, 2016 where Berta Cáceres was assassinated and they attempted to assassinate Gustavo Castro.

Mariano Díaz Chávez: the intelligence official of Special Honduran Forces involved in the plan to assassinate Berta Cáceres. During the time of the assassination he was under investigation for kidnapping and drug trafficking. Major Díaz was personnel officer in the 15th Batallion in the Bajo Aguán Region in 2012 when trainings were held with the Southern Command of the Special Operations of the United States. He helped train the Honduran Military Police for Public Order.

Sergio Rodríguez: the social, environmental and communications manager of DESA, in charge of infiltration and community disintegration in Río Blanco. He worked closely with the other accused and employees of DESA to monitor and surveil the activities of Berta Cáceres and the other leaders of COPINH by paying off community members to infiltrate COPINH activities.

Henrry Javier Hernández: part of the 15th Battalion under the command of Major Mariano Díaz. In 2013, he worked for the private security forces of the palm oil company DINANT who were accused of participating in a campaign of selective assassinations of leaders.