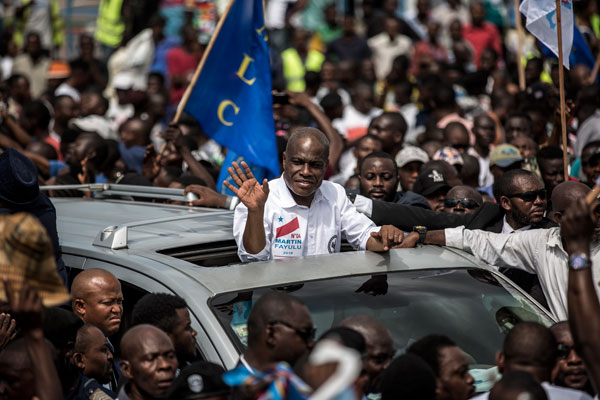 Presidential, legislative and provincial elections are scheduled for December 23 in the Democratic Republic of the Congo. It is uncertain whether they will be held due to logistical reasons. If the presidential election actually takes place, it will be the first ‘peaceful’ transfer of power since the United States’ Central Intelligence Agency (CIA), in cahoots with the United Nations, Belgium and other Western countries, overthrew Patrice Lumumba, Congo’s first democratically elected Prime Minister in 1960.

These elections were supposed to be held in 2016. However, president Joseph Kabila refused to conduct them because he wanted to hold on to power. In fact, the Congolese people forced Kabila to organize elections while making the ultimate sacrifice in life and limb. Kabila’s security forces gunned down activists, drove others into exile, and jailed scores of youth, some of who remain in prison to this day as political prisoners. Regional powers such as Angola and South Africa weighed in to pressure Kabila, along with other members of the international community.

Albeit his attempts to delay presidential elections in the Congo, Kabila finally named a successor in August to run for president. Emmanuel Ramazani Shadary, a party hardliner and former minister of interior, who is under sanctions by the European Union for committing human rights abuses in the Congo, was designated by Kabila to succeed him. It is still very uncertain whether elections will take place on December 23. If they do, they will certainly be chaotic at best and disastrous at worst.

For the Kabila regime, the main purpose of organizing the elections is to secure legitimacy from the so-called international community so that his majority coalition can continue to hold power. Kabila controls the purse strings, the military, the police, the constitutional court, and the electoral commission. He is also the head of the majority coalition electoral platform, The Common Front for the Congo (FCC in French).

The one key element missing for the Kabila regime is legitimacy from the international community, not even so much from the Congolese people. He has been ruling by force without the consent of the people for years and can continue to do so. However, his regime has come under increasing pressure from an international community that played a significant role in his ascension to power in 2001 and his tenure as head of state for the past 17 years.

In an effort to retain his good standing with his former suitors, the Kabila regime hired an Israeli security firm, Mer Security and Communication Systems, to lobby the Trump administration to back its actions in the Congo. Kabila has doled out $8 million dollars to right-wingers with connections to Donald Trump to retain the US backing that he has had since 2001. One of the key targets of Kabila’s lobbying efforts is Rudy Giuliani, who attended a party thrown in Washington by the Congolese government to attract Trump insiders. Francois Balumuene, the Congolese Ambassador to the US, says he believes Giuliani will deliver Kabila’s message to Donald Trump. In addition to pursuing right wingers with links to Trump, the lobbying firm appears to have made headway in painting a benign picture of Kabila in the US corporate media. In the past week, Kabila was interviewed by National Public Radio, New York Times, BBC News, Financial Times, Reuters, and the Washington Post. Without exception, the interviews sought to humanize Kabila. He was asked about his favorite movie or whether he smoked weed. During the interviews, Kabila claimed that he was organizing ‘perfect elections’ and even suggested that he may return in 2023 to run for president again.

The vicious realities of a country under siege by Kabila’s security forces appeared to be tangential to the questioning by the interviewers. The Vatican’s top representative in the Congo, Archbishop Laurent Monsengwo, said that Congo was an open-air prison under the Kabila regime. Yet, readers in the West would know nothing about this dire reality from reading the glowing pieces written and presented by the corporate media. As for the perfect elections that Kabila talked about, the 2018 Nobel Peace Prize winner, Dr. Denis Mukwege, says they are a joke and will only serve to maintain the same system of repression and predation. Yet again, the interviews did not see fit to challenge Kabila with the assessment of this year’s Nobel Laureate.

While Kabila seeks to organize a rigged presidential election to secure international legitimacy, the Congolese people seek to seize this opening to overturn the Kabila regime with or without perfect elections. They are mobilizing at an unprecedented level, hitting the streets in the hundreds of thousands for rallies at each stop made by the two main opposition candidates, Felix Tshisekedi and Martin Fayulu.

The Congolese have turned out to support their candidates en masse even against the repressive practices of Kabila’s security forces. The Kabila regime has blocked the leading Congolese opposition candidate, Martin Fayulu from landing his plane in key cities on his campaign route. In addition, in the key mining city of Lubumbashi, the Kabila regime unleashed a ferocious attack on Fayulu’s campaign and his supporters, resulting in loss of life and dozens of injuries. The security forces sprayed Fayulu’s supporters with hot water from tanks, launched tear gas to disperse crowds, fired live bullets at supporters, killing at least five people and blocked Fayulu’s campaign vehicles from traversing the city.

Despite the repressive and obstructionist practices on the part of the regime, the greatest threat to the “perfect” elections that Kabila speaks of is the so-called Independent National Electoral Commission (CENI in French). The usage of an electronic voting machine with which most Congolese are unfamiliar and which is seen as an instrument to facilitate cheating, and the suspect voters roll where over six million or 16% of the voters are unidentified, already raises serious questions about the veracity of the elections.

However, it is not clear if the CENI has delivered the over 100,000 voting machines to over 75,000 voting booths. In addition, the CENI reported over the weekend that it was in South Africa to secure the 1,662,386 ballots that were supposed to be delivered and in place by December 5th. It is impossible for these materials to be delivered to the 75,000 polling booths in less than a week, especially in a country the size of Western Europe and with limited infrastructure.

Irrespective of what the CENI does or the repressive practices of the Kabila regime, the future of the country is in the hands of the Congolese people. The large crowds that have turned out have been unequivocal in their demand for a change in leadership from the repressive Kabila regime. They have declared that they will not accept a Shadary power grab. They have vowed to be in the streets to reclaim their country should Shadary be announced as the victor, which is highly likely. Kabila, who was forced to organize elections, is not doing so to hand over power. The next week is one of reckoning for the Congolese people, with the future of their sons and daughters at stake.

Kambale Musavuli, a native of the Democratic Republic of Congo, is a social entrepreneur and an international human rights advocate. He serves as the National Spokesperson for the Friends of the Congo, a group that raises global consciousness about the situation in the Congo and provides support to local institutions in the Congo.