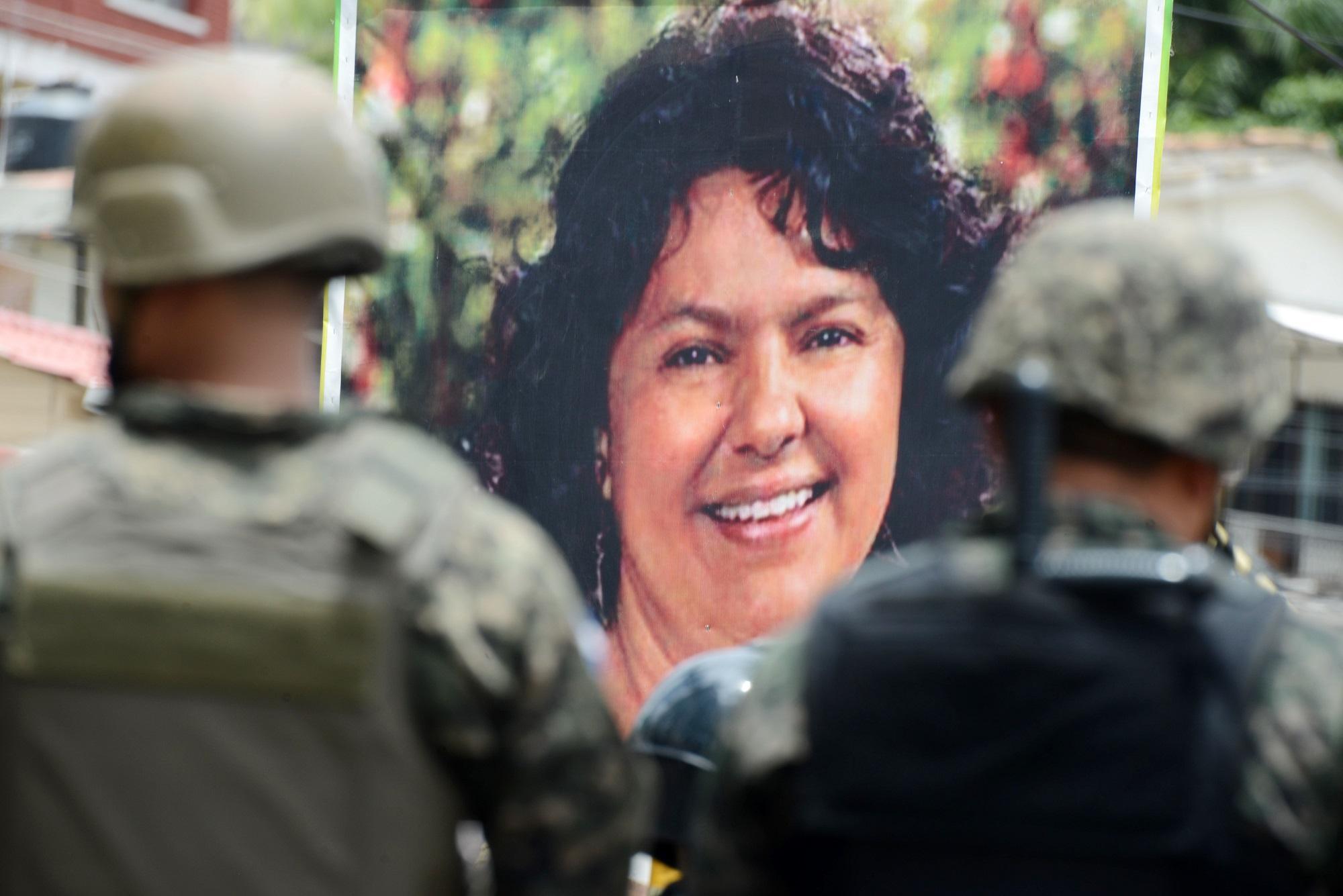 Soldiers in the foreground, photo of Berta Cáceres in the background. (Photo: El Caminante Honduras)

It has been almost three years since Berta Cáceres, an indigenous revolutionary activist from Honduras, was brutally murdered by hitmen inside her home in La Esperanza. Since her assassination, Cáceres’ family members, her organization, the Civic Council of Popular and Indigenous Organizations of Honduras (COPINH), and hundreds of Honduran and international social organizations have demanded that those that carried out, planned and financed Cáceres’ assassination be brought to trial and punished. They seek to break the systematic impunity enjoyed by those that kill activists and human rights defenders in order to advance their projects of capitalist exploitation.

The following is a short summary of the case itself and what has happened in the last year in the struggle for justice.

Before her assassination, Berta was the general coordinator of COPINH, which was engaged in a campaign of fierce resistance against the hydro-electric dam project Agua Zarca, owned by the company Desarrollos Energeticos S.A. (DESA).

Cáceres and other members of COPINH faced harsh repression and persecution by representatives of the DESA company, as well as members of the Public Force of Honduras by way of threats, criminalization, surveillance, infiltration of the organization and physical violence. In 2013, Tomás García was assassinated by the National Army of Honduras during a peaceful strike outside the construction site of the dam.

When news broke of Cáceres’ assassination on March 2, 2016, it was clear that it was another violent episode in the persecution against the indigenous, anti-patriarchal, anti-capitalist resistance represented by Cáceres and COPINH that threatened to re-found and revolutionize Honduras. It was obvious that the perpetrators of the crime were not merely the hitmen paid to pull the trigger, but the executives of the DESA company, the shareholders in DESA who represent the omnipotent Honduran oligarchy, the international financial institutions and banks that financed the project and members of the Honduran state and security forces.

However, the legal system entrusted with the task to fight for justice for the victims has actively worked against them. First, they said the assassination was a crime of passion and a fight inside the organization, violating the rights of the witness who had survived the assassination attempt. Then, during the process of investigation, the Attorney General refused to hand over the evidence to the legal team representing the victims and nearly two-and-a-half years after Berta was assassinated, they even claimed that they had not finished revising the technological devices of those accused. The actions by the court hearing the case also showed a clear bias to hide and protect those responsible for planning and financing the assassination, and they impeded every attempt by the victim’s legal team to uncover the powerful players responsible.

Due to the clearly biased attitude of the court, the legal team representing Cáceres’ family and COPINH (not officially representing COPINH as the court blocked this request), filed a petition for the judges to be recused. While the petition for recusal was still being reviewed, the court resumed proceedings [illegally] and when the victim’s legal team did not show up, they declared the official exclusion of the victim’s legal team from the proceedings. Thus, throughout the entirety of the trial, the victim’s were not present nor did they have legal representation.

In the face of these tremendous challenges, Cáceres’ family members and COPINH continued their mobilization outside the Supreme Court, called on international solidarity to denounce the court’s actions and continued to reveal the full truth behind the assassination of Berta Cáceres.

On November 29, 2018 the convictions were announced for the eight men who were on trial. Sergio Rodríguez, Mariano Díaz, Douglas Bustillo, Elvin Heriberto Rápalo, Edilson Duarte, Oscar Haroldo Torres and Henry Javier Hernández were all convicted of the assassination of Berta Cáceres.

After the ruling, family members, members of COPINH and the victim’s legal team spoke at a press conference: “The impunity that the masterminds of this crime continue to enjoy is part of the plot of corruption and violence that sustains the model of extraction that plunders our peoples. As victims, and other people, communities and organizations we commit to continue confronting it, like Berta Cáceres did, until dignity, truth and justice prevail in this case and in all of the struggles that are being waged right now throughout Honduras and the world.”

They vowed that “the struggle for justice for Berta Cáceres and the Lenca people does not end with the chapter that closes today, the convictions of the lowest layer of the criminal structure, with which the Honduran state seeks to silence the demand for justice. On the contrary, we are deepening our efforts.”

On January 10, the court will sentence those convicted and it is expected that within the next year or two, the trial will begin for David Castillo, the president of DESA who was arrested in March 2018.