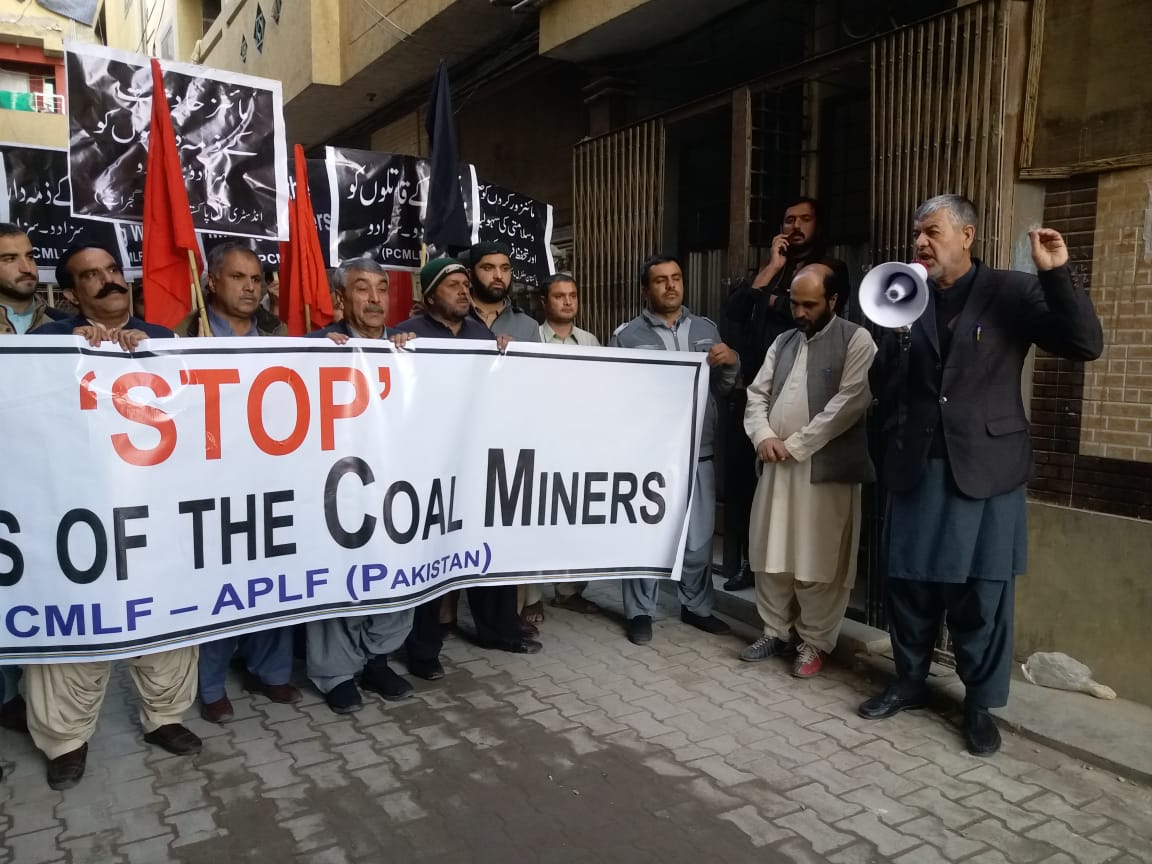 Miners' union protest against increasing mine explosion incident in Pakistan.

On January 22, miner’s union in Pakistan organised protest against the increasing number of deaths of coal miners in methane gas explosion across the Balochistan province of Pakistan. In January, ten miners were killed and scores injured in two explosions that happened in Loralai and Duki district. More than 200 laborers die on an average in coal mine-related explosions across the country every year, estimates the Pakistan Central Mines Labor Federation (PCMLF).

The main reason behind the high number of casualties is the collapse of mines due to the blast which happens when methane gas accumulated inside the mine catches fire. Miners often get trapped at a depth of over 1,700 feet when a portion of the mine caves in. The absence of a rescue crew further complicates the situation and, many a times, co-workers also lose their lives while doing rescue operations.

Following the explosion in Duki district on Monday morning, where six miners were killed, the PCMLF called upon the Imran Khan-led government to urgently ratify the International Labour Organization (ILO) Convention 176 on Health and Safety in Mines, and asked the authorities to “(urgently) implement the ILO Code in Underground Coal Mines, as recommended by the Meeting of Experts on Safety and Health in Coal Mines”.

The protesters demanded immediate efforts to recover dead bodies of miners from the coal mines, the launch of a judicial inquiry and the rigorous punishment of those whose negligence caused the accidents.

According to reports, almost 400 mines in the Balochistan province employ more than 100,000 coal miners between the age of 13 and 34. Among them, 12,000 miners are registered with the mines department while all the others are unregistered.

Activists say that the working conditions in mines across Pakistan are very poor and that miners work in inhuman conditions for 16-18 hours a day for merely USD 10 per week.

Coal mining is considered to be more hazardous than hard rock mining because of the nature of the rock strata, leakage or explosion of poisonous gases and coal dust, collapsing of mine stopes, and mechanical errors from improper use and malfunctioning of mining equipment. The death of more than 200 miners over past three years has triggered the enactment of Occupational Safety and Health Act in the state.

“The government must take immediate steps to ensure safe working conditions to avoid fatal accidents in coalfields such as Sorrange, Marwar, Duki, Mach, Chamalang, Sharigh, which continue to be dangerous places for work,” Sultan said.

On January 2, four miners were killed in an explosion in Loralai district of the Balochistan province. Two of them belonged to the same family, which hailed from Afghanistan. Another death was reported on December 31, 2018 in the Sharigh mines in the Khost area that was caused due to poisonous gas leakage.

Similarly, in a major incident that happened in August 2018, 19 coal mine workers died following a gas explosion in the Sanjadi area of Quetta. Two rescue workers also died on the same day.