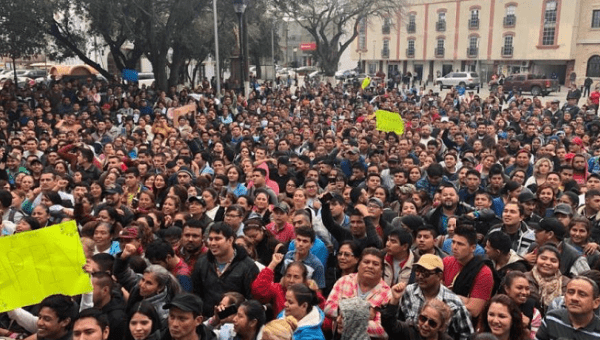 Tens of thousands of workers on strike in Matamoros, Mexico. Photo: Telesur

Over 70,000 factory workers from 50 plants in Heroica de Matamoros city in the state of Tamaulipas, Mexico have been on strike since January 12. Their demands include a 20% increase in salary, better working conditions, a compensation bonus, reduction in union dues and shorter work week. The strike has been called by the Union of Laborers, Industrial and Factory Workers (SJOIIM) and the Confederation of Mexican Workers (CTM).

On January 21, the workers held a mass demonstration, under the banner ‘Un Día Sin Obreros’ [A Day Without Workers]. They marched through the city shouting slogans such as“we will win this fight no matter what”, “the workers united will never be defeated” and “empty plants, a day without workers!” Earlier, on January 16, a general strike was organized in the region, which was joined by more than 40,000 workers.

Heroica de Matamoros is known as the industrial city of Mexico. The region covers a wide range of industries: automotive parts, textiles, machines, electrical components, chemical products and computer products. The companies established in the region are transnational corporations and mainly manufacture products for exportation. Although 70% of the country’s economy depends on these factories, the workers are among the lowest paid in the country. They make only USD 9 a day, which is almost 30% less than the average national salary.

In December 2018, president Andrés Manuel López Obrador signed the Decree of Fiscal Incentives of the Northern Border Region, which claimed to double the minimum salaries in the region. The labor dispute began in the first weeks of January when the employers refused to increase the salary as per the decree.

The strike that began with 800 workers from 7 factories is expanding extensively each day. The complete shutdown of over 50 factories is causing the corporations an estimated loss of USD 100 each week. Every day, workers march through the city, from factory to factory, chanting slogans and urging more workers to join the strike.

The employers threatened the protesters with mass layoffs, permanent closure of plants and criminal charges against “agitators”. Dozens of workers have also been dismissed for organizing the strike. Their reemployment has been added to the list of the workers’ demands.

“Here you work from Monday to Friday, and Saturday and Sunday if you have to. There is no air [in the plant] and the bathrooms are often dirty,” said Oscar, an auto parts worker, highlighting the exploitative working conditions. “All the plants are on strike. The majority of workers are out. The bosses want to threaten us with mass firings and are recording us and taking photos. They want to intimidate us and they are calling the state police on us,” he added.

Despite the strict measures, the workers are determined to continue their struggle until their demands are fulfilled.