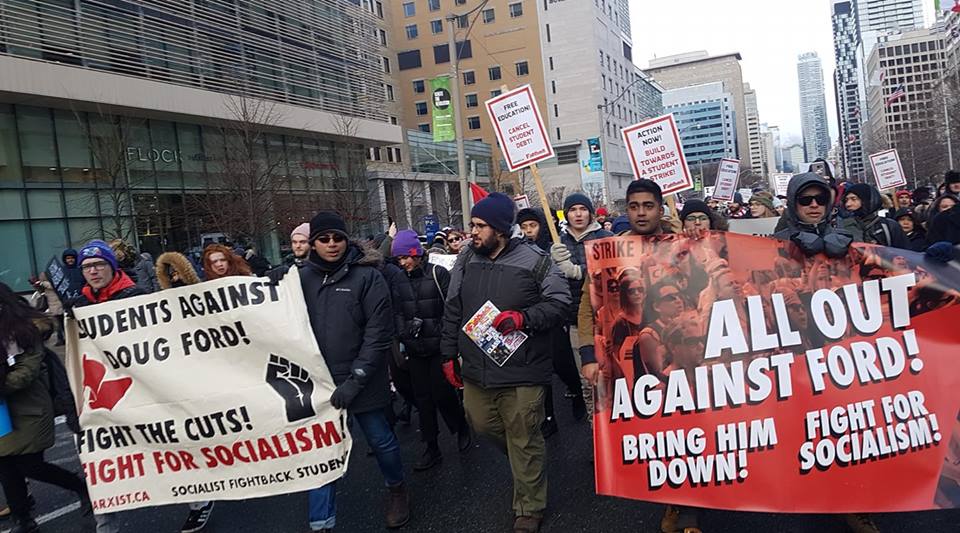 Students from various colleges and universities marched under the banner of the Canadian Students Federation to protest the announcement made by the Doug Ford provincial government cutting funds for education.

On January 25, students marched under the banner of the Canadian Students Federation, from Yonge-Dundas to the Legislative Assembly of Ontario, in Toronto’s Queen’s Park. They were protesting fund cuts in education announced by the provincial government led by Doug Ford on January 17. Students from various colleges and universities, including York University and University of Toronto Scarborough Campus, participated in the march. The protest was also joined by the Revolutionary Students Movement (RSM), Fightback and other groups.

Ford’s government announced a USD 600 million cut in student grants and USD 440 million cut in funds provided to universities and colleges. These include a 10% tuition cut (which actually underfunds institutions), a 50% cut in the Ontario Student Assistance Program (OSAP) grants, elimination of complete coverage for low-income students, removal of the grace period for paying back student loans and eliminating mandatory due payments to student unions, among other anti-student measures.

The RSM said that “the enemies of the people in the government of Ontario, ever faithful to protecting capitalist interests, have struck another blow against the interests of working class students”.

“This time, it is by increasing the cost of education through a particularly conniving scheme. First, they leaked an announcement about a 10% decrease in tuition fee for the 2019-2020 school year. They even promised that tuition fees will be frozen at this level for the following year as well. However, this is a diversion from the real news. The far more significant changes are in the structure of loans through the OSAP program. As always, when we delve deeper, we find that behind every such announcement, whatever the rhetoric, the goal for the government is to structure education to train a generation of workers equipped only to take on the jobs they desire to exploit us through, and be pacified both through debt and propaganda,” they added.

According to the protesting students, the government has canceled all work to include the general practices, customs and traditions of Indigenous peoples in geography, history and social studies courses in both elementary and high school curriculum. It has forced high schools to revert back to an outdated sex-education curriculum, reversing years of improved understanding of healthier relationships. It has also deprived the students from French-speaking communities in Ontario of funds for their education programs.

RSM called for a one-day school shutdown and marches on February 15 and March 20, the Red Spring Day of Action, “raising several demands, including inclusive education, internship with payments, abolition of tuition fees at all levels of education, cancellation of all outstanding student debt, barrier-free access to post-secondary education for all Indigenous people and democratic control of post-secondary institutions”.

In their petition, the Fightback group said that the new proposal would primarily impact low-income students, as well as undermine funding for student unions, student newspapers and campus clubs. They called this measure a direct attack on working class students, campus workers and student democracy, which must be opposed by all means possible.

After the inauguration of Doug Ford as premier of the Ontario province in Canada in June 2018, most of the government policies in the sectors of local governance, such as social spending, workers right and health services, have badly affected citizens in the province.