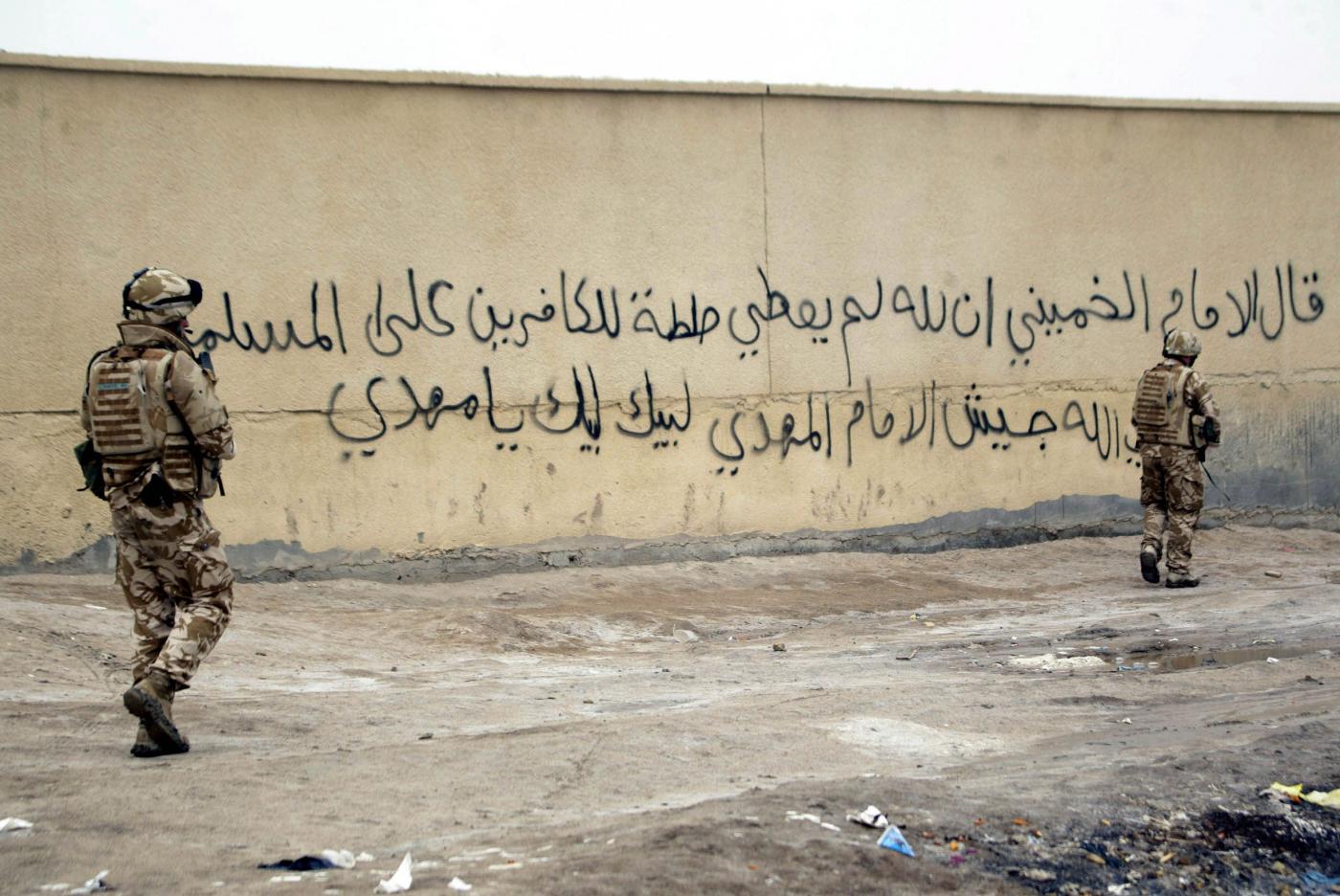 British soldiers on patrol in Basra in April 2007. The graffiti urges Iraqis to support Muqtada al-Sadr's Mahdi army, which was fighting against the British military at the time. (Photo:AFP)

British army soldiers were given the permission to shoot unarmed civilians in Iraq and Afghanistan if they were holding a phone or a shovel, or were in any way acting “suspiciously”, according to an investigation by the Middle East Eye (MEE). The report, published on February 4, states that a number of children and teenage boys were also among those killed.

The British military constantly suspected unarmed civilians of keeping tabs on British soldiers to aid militants’ attacks, or plant roadside bombs on their routes. As a result, interviewed soldiers told MEE, the rules of engagement for British troops stationed in Afghanistan and Iraq were relaxed, giving way to a “killing spree”.

Soldiers also said that their seniors promised to protect them in case of any investigation by the military police. In the event that lethal force was used, the soldiers were advised that it was okay to say their lives were at risk as an excuse to gain immunity from prosecution and subsequent punishment.

According to the Geneva Conventions, civilians must not be attacked during a situation of international armed conflict “unless and for such time as they take a direct part in hostilities.” However, there is no precise definition of “direct participation”. Civilians, especially if they are unarmed, are also to be given the benefit of the doubt, before being targeted with lethal force.

On top of killing unarmed civilians, cover-ups following some killings in a few instances were also reported. In these cover-ups, soldiers and their senior officials placed Soviet-era weapons next to their victims to disguise them as Taliban fighters or militants and stage the killings as legitimate anti-terrorism operations. One interviewed soldier reported a similar kind of cover-up after a shooting in Afghanistan in which two unarmed teenage boys were killed. Soldiers said Soviet-era weapons were stored inside British bases in the two countries solely for this purpose.

The unarmed civilians being killed on suspicion of being spotters were also called ‘dickers’, a British army slang for a spotter. The term ‘dicker’ originates from the conflict in Northern Ireland which lasted 30 years. British soldiers deployed in Northern Ireland used the term to describe people living in Irish Nationalist areas they suspected were reporting British troop movements to the Irish Republican Army.

In both Iraq and Afghanistan, British soldiers were granted these permissions, especially at times when there was an increase in violence and attacks against them by local fighters and militants who were opposed to the British military occupation. It is believed to have started in Amrah in South East Iraq as early as June 2004, in the middle of intense fighting between the British army and Shia militia groups.

The report also revealed how junior officers in the British army were taught to specifically shoot ‘dickers’ during their training. One training aid implored them to deal with ‘dickers in a firm and high-handed manner. It also advised them to confiscate any phones or photographs in their possession, adding that “dickers may be treated as legitimate targets when in contact.”

Most of these killings took place during night time patrols carried out by the soldiers in armored vehicles. One of the soldiers, who was in Basra in 2007, describing the terrible state of lawlessness and impunity he witnessed, told MEE that they could shoot anyone they thought could be a potential terrorist, even when there was no way for them to differentiate between terrorists and civilians.

The investigation also found that soldiers did not issue verbal warnings or fire warning shots before going ahead with the killings in most cases, even though they are stipulated by law to do so. Several on-duty soldiers also expressed a bloodthirsty desire to kill, repeatedly talking about how they wanted to kill before their tour ends.