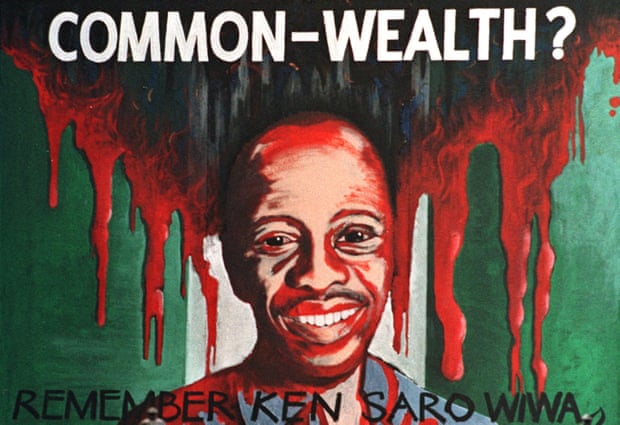 Ken Saro-Wiwa and eight others who were leading the protests against Shell were executed following a show trial in 1995. Photo: Amnesty International/Reuters

A hearing against the Anglo-Dutch Shell petroleum company – known also as the Royal Dutch – began on February 12 at a Hague district court in Netherlands, where it stands accused of systematic human rights violations in Nigeria. Shell has been charged with being complicit in acts of mass killings, rapes and torching of villages on the oil fields of Ogoniland. These crimes were committed by the Nigerian military in 1990s, allegedly at the behest of the company.

After a decade-long struggle by families of the Ogoni victims to bring the company to justice in US courts failed as the latter cited lack of jurisdiction, the case was filed in a Netherlands court in June 2017. It was filed by the wives of four of the nine Ogoni activists who were arrested, tortured and killed after a show trial in which they were convicted of murder.

All the nine were actively leading protests against the Shell company whose pipeline leaks had wrecked the environment of Ogoniland to such an extent that livelihoods of this community were destroyed.

In Rivers State, located in the southernmost part of Nigeria along the Gulf of Guinea, the Ogoni community inhabit a land of about 1,050 square kilometers. The Shell company, in partnership with the British colonial government, discovered oil fields in the region and began production in 1958, two years before Nigeria’s independence. Following independence, Shell grew to be the wealthiest and the most powerful company in Nigeria.

Between 1976 and 1991, 2,976 incidents of oil spills from around 2.1 million barrels had occurred in Ogoniland. This quantity amounted to 40% of all the worldwide oil spills by Shell, concentrated over an area of a little over 1,000 kilometres. The resulting damage to the alluvial soil and the poisoning of groundwater with carcinogens rendered farming, the primary source of livelihood of the villagers, unviable.

According to a 2011 report by United Nations Environment Programme (UNEP), which was commissioned to carry out an assessment in 2006 by the Nigerian government, the damage from Shell’s activities extends beyond oil spills. Gas flares at the refinery have burnt for 24 hours daily for over 50 years causing various illnesses to the people.

When Ogoni people organized a peaceful resistance
As the distress mounted, protests broke out in Shell’s facility in Umuechem village in 1990. In October that year, when Shell requested “security protection” for its facility, police units, armed with guns and grenades, carried out an operation in the village, burning down 595 homes and killing 80 people. Their bodies were dumped in the river.

“From at least this point on, Shell executives would have understood the risks associated with calling for intervention from the security forces. Despite this, there is clear evidence that Shell continued to do just that,” Amnesty International stated in 2017, after releasing an 89-page report titled “A Criminal Enterprise? Shell’s Involvement in Human Rights Violations in Nigeria in 1990s”.

This report was compiled from numerous testimonies as well documents – including internal documents of the company, emails shared among its executives and minutes of the internal meetings, as well as meetings with the security forces.

As more such atrocities continued, the Movement for the Survival of the Ogoni People (MOSOP), founded by award-winning writer and environmental activist Ken Saro-Wiwa to resist the company, grew in strength. Finally, by January 1993, Shell was forced to temporarily wind up operations, citing security concerns.

However, the laying of a new pipeline by the company’s contractors continued after Shell’s departure. When this too triggered protests, Shell repeatedly called upon the government to deploy its army to protect its new pipeline.

The army action which ensued left 11 villagers of Biara will bullet wounds on April 30 that year, four days after which another was shot dead in the village of Nonwa. Barely a week after, executives from the company held a series of meetings with the government and security officials. “The minutes of these meetings show that, rather than raising concerns about the shootings of unarmed protesters, Shell was actively lobbying for the government and the security forces to allow them to continue work in Ogoniland – and was offering “logistical” help in return,” Amnesty stated.

By mid-December that year, a coup brought into power a military dictatorship led by General Sani Abacha. That very month, Shell wrote to the military official in charge of administration of Rivers State, complaining about specific communities of people who were protesting.

Obliging within a month, the government, in January 1994, set up the ISTF, which was a special security unit tasked to “restore and maintain law and order in Ogoniland”, in order to ensure that “those carrying out business activities.. are not molested.”

The very next month, when more villagers demonstrated outside Shell’s regional headquarters in Port Harcourt, the ISTF’s unit commander ordered open fire at the unarmed protesters. 10 days after this incident, on March 3, Shell is said to have paid the ISTF $900 in a “a “show of gratitude and motivation for a sustained favorable disposition towards [Shell] in future assignments,” according to the company’s internal documents accessed by Amnesty.

Shell’s dealings with the military dictatorship

The following month, after Brian Anderson, the then Chairperson of Shell’s Nigerian division, met the military dictator of country and expressed his concerns arising from “the problem of the Ogonis and Ken Saro-Wiwa”, state violence against the villagers escalated.

“Shell operations still impossible unless ruthless military operations are undertaken for smooth economic activities to commence,” ISTF commander Paul Okuntimo is supposed to have said in a meeting where he outlined the plans to deal with Ogoni villagers, according to a confidential memo dated May 12 1994, which was later obtained by MOSOP and leaked to the media.

Less than 10 days later, leaders of MOSOP, including its founder Ken Saro-Wiwa, were charged of being complicit in murder of four traditional chiefs and arrested by the ISTF who tortured them in detention. Soon after their arrests, the ISTF unleashed a wave of terror against the villages of Ogoniland, torching houses and killing and raping systematically. According the report:

“It is not known how many people died during these attacks.. According to an Amnesty International report released on 24 June 1994 some 30 villages had been attacked and “more than 50 members of the Ogoni ethnic group are reported to have been extra-judicially executed.” In July that year, the Dutch ambassador told Shell that the army had killed some 800 Ogonis.”

In many of these operations, Shell directly provided vehicles for the ISTF. By the end of 1995, chairman Anderson is said to have met with General Sani Abacha at least three times. It must, however, be noted that the company officials overseeing its dealing with the Ogoni people were not limited to those based in Nigeria.

“Calling for investigations to be launched in the three relevant jurisdictions: Nigeria, where the crimes occurred, as well as the UK and the Netherlands, where Shell is headquartered”, Amnesty International, citing company’s internal documents, stated that:

“..at all times, Shell’s directors based in The Hague and London were fully aware of what was happening in Nigeria. One memo refers to the directors’ approval of a detailed strategy drawn up by Shell Nigeria in December 1994 for how the company should respond to criticism in the wake of the Ogoni protests. In March 1995 Shell executives in London had a meeting with representatives of the Nigerian military in London, at which they agreed to “meet from time to time” to share information.”

A few months after this meeting in London, in November 1995, Ken Saro-Wiwa and eight other leaders who were arrested by the ISTF were found guilty of murders in a sham trial and hanged to death.

“In his final words to the tribunal that convicted him, Ken Saro-Wiwa warned that Shell would face its own day in court,” said Audrey Gaughran, Senior Director of Research at Amnesty International.

Almost a quarter century later, four of the widowers of the nine activists that were hanged – Esther Kiobel, Victoria Bera, Blessing Eawo and Charity Levula – are set to prosecute Shell at a court in Hague.