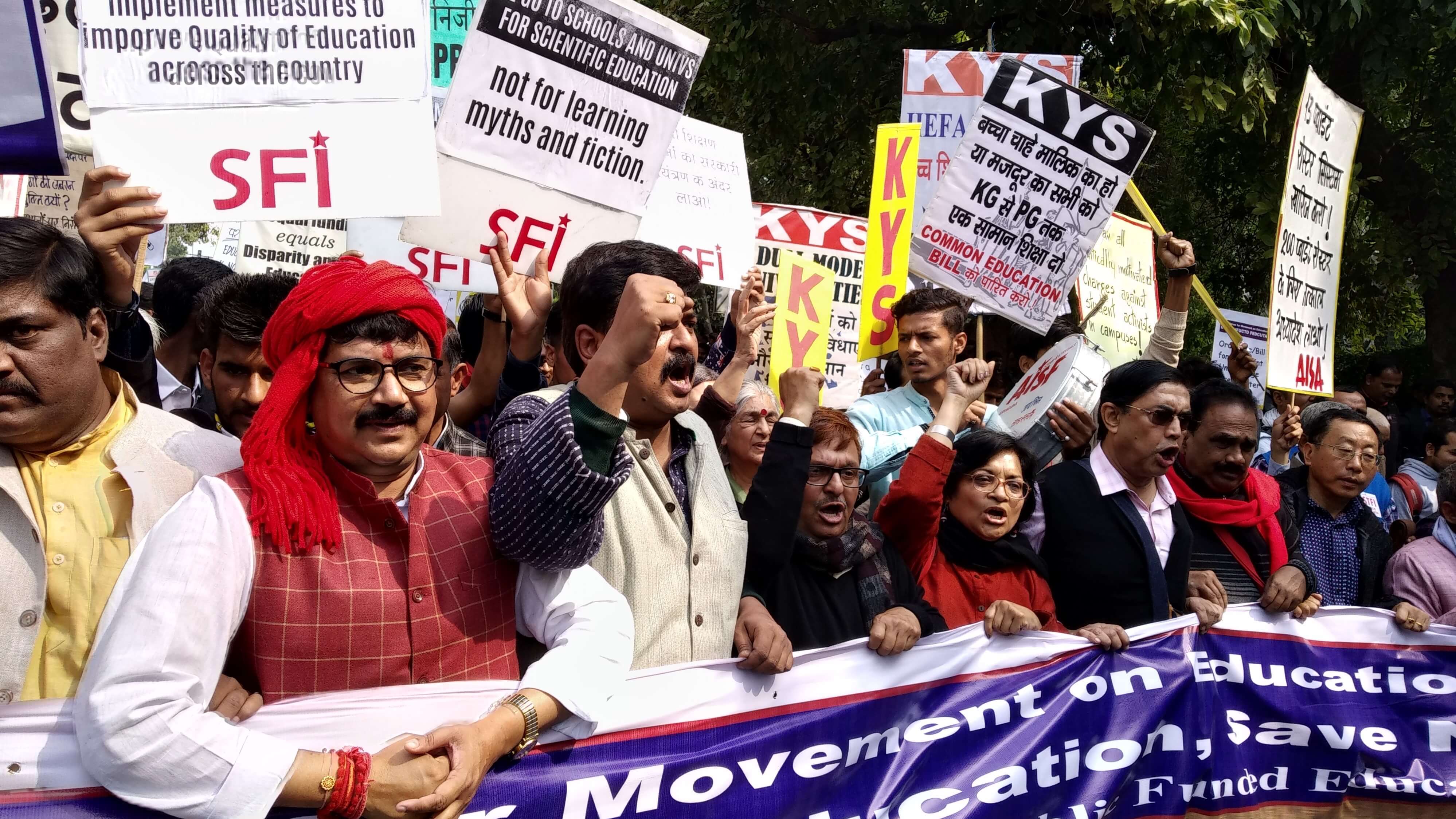 Thousands of students, from across India, mobilized by five left-wing student organizations converged on the capital, New Delhi, on February 18 and marched to the Parliament Street, where they demonstrated against the assault on the education system by the far-right national government led by the Bharatiya Janata Party (BJP). With placards reading “6% of GDP for education”, “Education is not for sale” and “We go to schools and universities for scientific education, not to learn myths and fiction”, the students protested against the under-funding of public education, the government’s attempts to make way for more privatization, and the manipulation of school and university syllabi to promote a Hindu supremacist ideology.

The following day, on February 19, teachers and non-teaching educational staff from all over the country, including from the geographically isolated northeast, joined the students in solidarity. While voicing their support for the demands students raised, they added to it demands of their own to address the grievances that they face from the current government’s attempts to undermine the public education system.

In the almost three decades of neoliberal onslaught, successive governments have taken it up as a legitimate state policy to make space for private businesses to penetrate the education sector for profits. This was accompanied with cutting down of government investments in public education, embracing the neoliberal argument that education must not be regarded as a right that the government is obliged to provide.

In 2014, ahead of the general election, the currently ruling BJP had promised in election manifesto that, if elected, the new government would raise the budget allocation to 6% of the GDP, for which students and teachers had already been agitating for years by then.

However, after coming to power, the allocation rate by central government has been reduced year after year. Funds allocated to education came down from 0.71% in 2013-14 to 0.45% of the GDP, in this year’s budget. Together with the allocation from all the state governments, the total share for this year comes up to a mere 2.7% of the GDP, which falls well below what is required to provide a basic quality of education to all.

This chronic underfunding has forced many universities to sharply reduce the number of seats offered. Premier institutions such as the Jawaharlal Nehru University are forced to stop subscription to vital journals due to shortage of library funds. This is legitimized by the narrative, repeated in the several mainstream media outlets, that social sciences, which are more likely to produce “anti-national” students critical of the government, do not deserve tax-payers’ money. But the finest technological institutes in the country haven’t received a better treatment either. A 2017 proposal by the Ministry of Human Resources Development to allot Rs 8,700 crore to upgrade the top seven of the Indian Institutes of Technology (IIT) was rejected on the grounds that these universities haven’t taken measures to hike fees and raise revenue from corporate houses. While one government policy dictates that the funding must be provided according to the rankings, another policy reasons that those high-ranking institutions, because of their prestigious status, must be able to meet the expenditure on their own without using public subsidies.

In the name of granting “autonomous status” to these universities, the government is expecting funds to be raised by the universities by hiking fees on students and introducing “self-financed courses”, that will cater to the corporate sector by producing workers with very specific exploitable skill sets. Grants made to universities are sought to be replaced by loans whose principal amount must be repaid by university, which in turn passes on the costs to the students through various direct and indirect means.

Such publicly funded universities, which charge a minimal tuition and hostel fee while offering quality education, are virtually the only platforms that allow students coming from outside the small privileged class to pursue higher education. Worst affected among them are the students from the socially marginalized castes. Most of these students cannot afford to study even in these universities without receiving scholarship amounts.

Over a period of three years, outstanding scholarship amounts that had to be paid by the government to these students, categorized under other backward classes, scheduled castes, or scheduled tribes, had piled up to USD 1.6 billion in 2018. The amount clear this backlog in this year’s budget, however, is a mere USD 422 million, which is a further decline from USD 470 million in last year’s budget. This has resulted in a situation where close to 75% of the people who clear the 12th grade or high secondary schooling in the country are not in position to pursue higher education. Teachers from these marginalized communities are also targets of this government, which has modified the hiring criteria for seats reserved for them, weakening the nation’s affirmative action regime. This has led to 33% of the teaching posts, reserved for the oppressed castes, being left vacant.

The condition of primary education is not any rosier. About 90 million children in the India remain out of school – the highest number for any country. For those children attending classes, the quality of education provided is abysmal in government schools, a large number of which have only one teacher.

“Schools are allotted Rs 10,000 in the beginning of each year, within the which the costs of electricity and other bills as well as the maintenance of the campus and furniture have to be met. While this amount is barely enough, even this is not allocated on the time. There have been dues pending for the last one and a half years,” complained Shankar Babu, a primary school teacher who had traveled over 1,500 kilometers from the southern state of Telangana to join the students protesting in Delhi.

The class strength, especially in certain rural areas which host or produce a large number of migrant workers, do not remain static throughout the year. When families leave their villages as seasonal migrants for better employment opportunities, children often have to temporarily drop out from the schools. When the varying school strength drops to 20, all but one teacher continues to remain, while the rest are removed.

“While this is done in the name of rationalization of teacher-student ratio, when school strength rises again, however, teachers are not rehired. Many times students are removed from one school and placed in another. These are young children we are talking about. They take time to adjust themselves to a new environment,” he said.

For Chandrashekar, another primary school teacher from south India, the importance of public education goes well beyond the exorbitant fees charged in private schools, that a majority of the parents in the country cannot afford to pay. “There is a more crucial issue here,” he said. “Private schools mostly load the children with skills and information that can be used by the corporates to fatten their profits. But it is the task of public schools to facilitate an all-round development of the child who will be a future citizen of the country.”

Interjecting Chandrashekar here, another teacher who had travelled with him said, “And we are very much in a position to provide education of such quality. We are no less qualified than the teacher in the private school. But instead of teaching, we are asked to oversee other works which have nothing to do with our profession. In the morning hours we receive a call and are told to compile and submit by evening report on the quantity of food consumed that day by children under mid-day meals scheme. Sometimes, we are even told to go to the nearby village and check whether or not any progress has been made in an ongoing public works project. How are we supposed to spend time teaching the students this way?”

Government schemes with amicable sounding names such as ‘Beti Bachao, Beti Padhao’ (Hindi for ‘save the daughter, educate the daughter’) have done little to assuage the anger of hundreds of female students in the demonstration. They argued that the government has done little to make education more accessible to girls and women, and many said they feel increasingly unsafe under the present political climate. Dismissing the scheme, one young undergraduate in the rally said, “the money spent on implementing this scheme to bring education to us is less than what was spent on advertising it.”

Addressing the demonstration after one of the speakers pointed out that undermining the education system is an agenda of the fascist forces worldwide, Mayukh Biswas, all India General Secretary of Students Federation of India, stressed on the importance of what they were agitating for. “This fight”, he said, “is not only a struggle between opposing ideologies, but a struggle between truth and lies, between light and darkness. And history will not absolve those who remain non-partisan in this fight.”