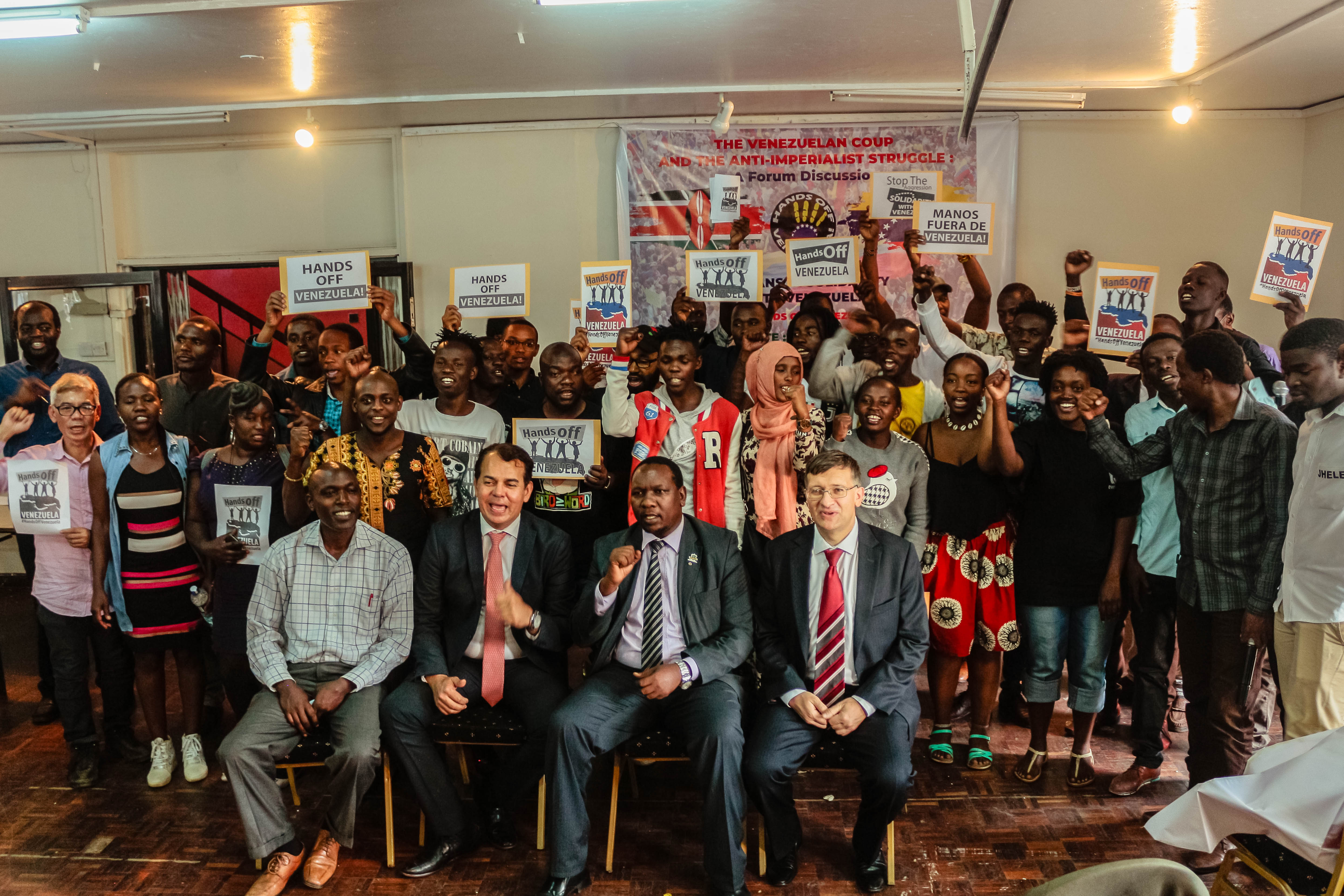 The speakers and attendees of the forum, The Venezuelan Coup and the Anti- Imperialist Struggle, organized by the ILPS show their solidarity with Venezuela and opposition to US intervention (Photo: ILPS)

On February 18, progressive organizations in Kenya held a forum at the Kenya National Theater in downtown Nairobi to mark “Dedan Kimathi Day”. Kimathi was the leader of the Kenya Land and Freedom Army, popularly known as “the Mau Mau”, who led the fight for the country’s liberation against British colonialism in the 1950s. He was killed in 1957 after leading the heroic armed struggle, which was widely supported by the people, for years.

The forum was attended by around 200 people. The main speaker was Professor Maina wa Kinyatti, a freedom fighter who was imprisoned by the Daniel arap Moi dictatorship, a historian, and author of many books on Kimathi and the Mau Mau.

The gathering not only touched on Kenya’s continuing struggle against imperialism for national and social liberation, but also the need for solidarity with peoples fighting the main imperialist power in the world today, which is the United States. At the forum’s plenary discussion, it was therefore natural that the attendees were invited to another forum — this time, on the US-led coup against the Bolivarian government of Venezuela.

The forum on US-Guaido coup

On February 20, a forum called “The Venezuelan Coup and the Anti-imperialist Struggle” was held at the Kenya National Theater. It was organized by the Kenya Organizing Committee of the International League of Peoples’ Struggle (ILPS), the global anti-imperialist coalition of people’s movements.

The forum was attended by more than 60 people, composed mostly of youth from urban poor communities and schools. It speakers included a representative of Venezuela’s embassy in Kenya and members of progressive organizations. A counsellor of the embassy of the Russian Federation in Kenya also attended the event.

Invitations went around social media for days before the forum, particularly on Twitter, WhatsApp and Facebook, after opposition leader, Juan Guaido, declared himself Venezuela’s “interim president” on January 23. After the singing of the national anthem, and some introductions by the master of ceremonies, the welcoming remarks were read by the ILPS chairperson, Prof. Jose Maria Sison. Sison said that “As the US and other governments allied with the US express their support for Guaido, the workers and peoples of the world should express their support for the real government of Venezuela, led by Nicolas Maduro.”

Hon. Jose Avila Torres, the diplomatic representative of the Embassy of Venezuela in Kenya, started the discussion by presenting the recent developments in his country. He narrated the opposition’s boycott of the 2018 elections and Guaido’s declaration. He condemned the US, and governments allied with the US, for supporting Guaido. Calling this “the greatest theft” of democracy in Venezuela’s experience as a republic, he criticized the international big capitalist media for depicting Guaido as “the good guy”.

Sobukwe Shukura, organizer of the All-African People’s Revolutionary Party, spoke next and condemned the US and European countries for instigating and supporting the coup against the Venezuelan government.

He called attention to the racial dimension of the struggle in Venezuela, pointing to how the indigenous and Black populations have historically been robbed of their land, and subjected to slavery and oppression by colonizers and their puppets among big capitalists and landlords. It is in this light that he praised the improvements in the living standards in Venezuela, caused by Bolivarian reforms under Hugo Chavez which are continued by Maduro. He said that these reforms benefit the poor, composed mostly of colored people, who have been historically oppressed by colonialism and neo-colonialism.

He said that the US and European countries are merely showing “their true colors” in supporting Guaido. Their true motive, he added, is to plunder Venezuela’s oil and other natural resources, and subjugate a fighting people. His proclaimed that “it is time for the people of Kenya, Africa and the world to show their true colors on this issue”.

The next speaker was Zahid Rajan, co-chairperson of the Kenya-Palestine Solidarity Movement. Stating that the US imperialist offensive in Venezuela is similar to US offensives against other peoples of the world, he proceeded to briefly discuss the US’ imperialist role in all global regions.

He called attention to the plight and struggle of the Palestinian people against US imperialism and Zionism. He presented clear action points to support the Venezuelan and Palestinian people’s struggles through social media, forums, assemblies and various forms of protests and actions.

Njoki Gachanja, a member of Emerging Voices, described by its members as an artist-activist, activist-artist group, read the Revolutionary Government of the Republic of Cuba’s statement of solidarity with the people of Venezuela.

Depicting the scenario in Venezuela, Cuba stated that “The US intends to fabricate a humanitarian pretext in order to launch a military attack… and… is seeking to introduce into this sovereign nation’s territory alleged humanitarian aid — which is one thousand times inferior as compared to the economic damages provoked by the siege imposed by Washington.”

Meanwhile, Reynaldo Oliveros, member of the secretariat of the ILPS Kenya Organizing Committee, discussed US imperialism’s crimes against the peoples of the world, especially Africa. He located the Guaido coup in the long list of US’ imperialist interventions in the world.

Lewis Maghanga, co-chair of the ILPS Kenya Organizing Committee and chairperson of the Young Socialist League, described the ongoing struggles in Kenya, and related these to the advances made by the Bolivarian government in Venezuela.

He said that Venezuela has made advances in fields in which the people of Kenya are still fighting, including land for the tillers and landless, education unencumbered by high fees and repression, freedom from extrajudicial killings and human rights violations, adequate employment, higher wages and better working conditions. After the speakers, Anthem Republic, an artist from the urban poor community of Mathare, performed two pieces of spoken word poetry. The first was about life in the slums, and the second about the greed and sloth of the country’s politicians.

Before the plenary discussion opened, Hon. Andrey V. Shestakov, counsellor of the Embassy of the Russian Federation, traced his country’s solidarity with the people of Venezuela to its solidarity with, and support for, national liberation movements in Africa and the world.

During the plenary discussion, members of the audience took turns in stating their solidarity with Venezuela, in emphasizing the need to struggle against imperialism and for people’s control of Kenya’s wealth.

Jared Akama Onyari, secretary-general of the Kenya Union of Judiciary Workers, called on the youth to continue the struggle for national freedom. He also called for more forums and discussions on pressing issues being faced by the people of the world.

At the end of the forum, everyone gathered together to collectively show solidarity with the people of Venezuela, the Bolivarian movement and the Maduro government. As is usual with forums organized by progressive organizations in Kenya, it ended with slogans, saying “Down with imperialism!”, “Viva Venezuela!”, “Long live international solidarity!” and “The spirit of Kimathi, his struggle for national and social liberation, the struggle against imperialism strengthened by international solidarity, live on”.

Gibson Maina is the coordinator of Emerging Voices and co-chairperson of the ILPS Kenya Organizing Committee.