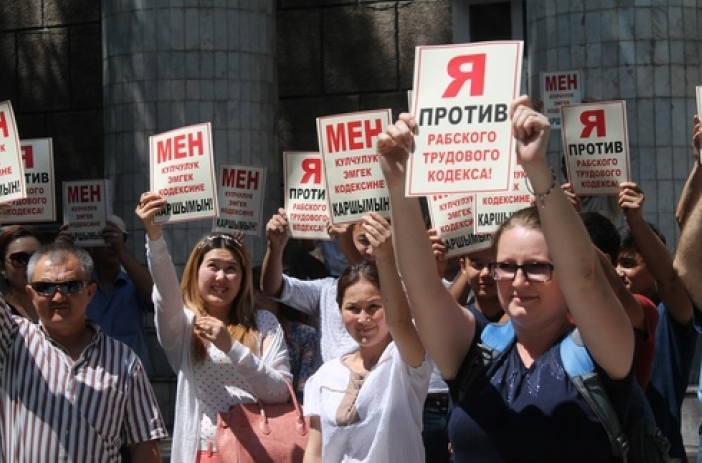 Trade unionists are also protesting the moratorium on labor inspections in the country. Photo: IndustriAll

Activists in Kyrgyzstan are calling on the government to restore administrative and criminal liability for violations of the country’s labor code. After legislative changes in labor laws in January, workers have been deprived of social protection, unions associated with IndustriALL said.

“The new laws destroy the foundations of the existing system of labor relations and violate ILO Conventions Freedom of Association and the Right to Organize, as well as other international core labour standards. We stands in solidarity with our affiliates,” Vadim Borisov, IndustriALL regional secretary, stated.

The government of Kyrgyzstan headed by prime minister Muhammetkaliy Abulgaziyev had attempted to bring changes to labor code some years before too but had to put the move on hold following resistance. However, the recent penal code that was successfully enacted three months ago contains no articles providing criminal liability for violating labor legislation and labor protection rules.

According to workers, after these changes were made, it is no longer an offense to employ staff without signing a contract or for an employer to refuse to engage in collective bargaining. Employers can also illegally dismiss employees who are members of elected representative bodies of employees

There has also been a moratorium on labor inspections since the beginning of the year. Scheduled inspections have been canceled. For next two years, labor inspections will be carried out only during crisis situations, such as threats to the life and health of workers.

According to the president of the National Committee of Trade Union, Almabubu Zharkynbaeva, unions can arrange inspections at companies with union presence, which is the case in only 30% of the companies: “Labor inspectors must be allowed to arrange scheduled inspections again,” he said.

President of the Mining and Metallurgy Trade Union of Kyrgyzstan Eldar Tadzhibaev, who met the minister of justice, Marat Dzamankulov, on March 5, stated that the unions had informed officials that new legislation did not elaborate on the responsibilities for violations of the Labor Code. The workers have expressed their willingness to .propose measures to fulfill these gaps.