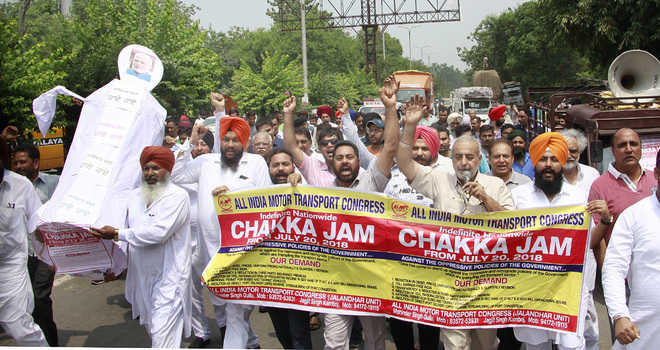 Nearly 140,000 workers have been on strike since Thursday. Photo: The Tribune

Thousands of government employees, including those recruited on a contract basis, across the State of Punjab in India are on an indefinite pen-down strike at the secretariat in the capital of Chandigarh. Protesting under the banner of the Sanjha Mulazim Manch, Punjab, the employees have raised a number of basic demands, including ‘equal pay for equal work’.

The employees are demanding the release of pending dearness allowances (DA), reduction of probation period from three years to two years, equal pay for equal work, cancellation of the transfers of over 1,000 employees from education department and regularization of contractual employees.

The protesters said that more unions would join the agitation and halt traffic across the State. Speaking to Newsclick, Manjeet Singh Randhawa, senior assistant at the Punjab Civil Secretariat, said, “Around 140,000 employees are on strike. We will stop all government vehicles on Monday”.

He said the Indian National Congress-led State government that came to power in 2017 had promised to address their demands but had failed to do so.

The protesting contractual and outsourced employees have been demanding regularization of jobs and ‘equal pay for equal work’ vis-a-vis permanent employees.

Randhawa said, “Contractual employees receive Rs 10,500 (USD 145) for the same work that a permanent employee does. A permanent employee gets around Rs 35,000 (USD 486). This is a clear case of wage disparity. Also, contractual employees always live in the fear that they will be thrown out anytime. Our demand is that the mode of recruitment should be regular and not contractual or outsourced.”

Another protester, wishing anonymity said, “Over 50,000 contractual employees are demanding a policy through which they are regularized.”      Contractual teachers, who are also part of the protest, have also been demanding job regularization.

Around 1,025 clerical staff and government teachers were transferred in December 2018. Protesters see these transfers as part of a deliberate attempt to target them. “These employees were involved in raising a number of demands with the government. They were transferred to areas which are 200-300 km away from their location,” said Gurmail Singh Sindhu, convener of Sanjha Mulazim Manch.

This story first appeared on Newsclick