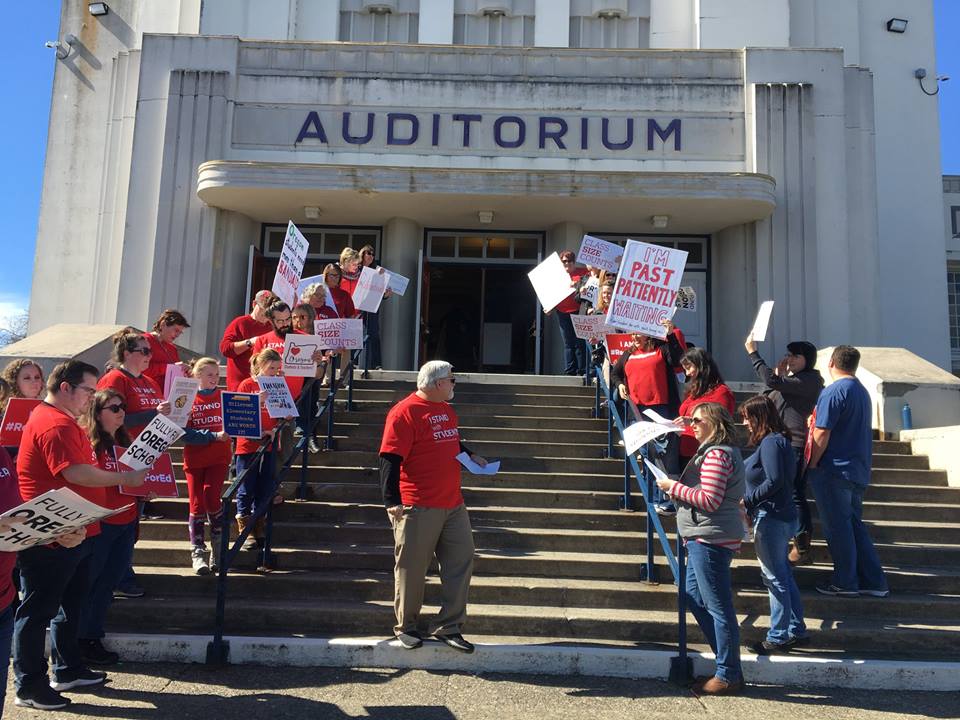 School teachers in Oregon, United States, are gearing up for an agitation against the cuts in the state budget allocation for education. The Oregon Education Association (OEA) has given a call for a day of action on May 8, including walkout from schools.

Even though the lawmakers argued that the budget for 2019-2021, released on March 7, prioritized K-12 (Kindergarten to 12th grade) education and Oregon health services, educators in the state claimed that the budget is inadequate.

The Statesman Journal reported that the proposed General Fund and Lottery Funds (which includes funds allocated for education) budget of  USD 23.2 billion is 3.2% lower than the current service levels. The budget plan has a target general fund expenditure reduction of 5%.

According to reports, in per student funding Oregon now ranked 18th nationally, but graduation rate ranks a dismal 48th lowest and student-teacher ratios are among the highest in the nation.

Brighter Oregon reported that “even though Oregon has recovered more revenue since the recession than any other state in the nation, and is now investing above the national average in K-12, but those dollars aren’t going toward making the education system work for our kids. Schools say they need an additional $200 million above what the legislative subcommittee passed just to avoid additional cuts, much less make the kinds of investments needed to give Oregon kids the education they deserve”.

“The problem is the dollars investing in education aren’t going to the classroom, they are going toward ever increasing Public Employee Retirement System (PERS), healthcare benefits and salaries. As a percent of the overall budget increase, PERS costs represent more than 25 percent, healthcare costs are more than 10 percent, and salaries are about a third”, the report said.

John Larson, president of the OEA, said that the “budget could mean major cuts for schools and as many as 900 layoffs across the state. The proposed budget fails students and shows lawmakers are impossibly out of touch.”

“It’s time for us to say, invest in students. Thirty years of disinvestment have put our schools into crisis and today is the breaking point for me and for educators around the state,” Larson added.

Earlier in February, more than 4,000 educators and students marched to the State Capitol to raise their concerns about the State’s disinvestment in education. The teachers had said that overcrowded classrooms and understaffed schools are hurting students, and lawmakers need to put more money into education. They have accused that Oregon ranks near the top for large class sizes, and in the bottom half nationally for funding to schools. They also demanded more support staff to work with teachers.

Teachers’ agitation in the US against the State’s disinvestment in public education is gaining momentum day by day across the country. Over the past year, teachers in a number of US States have gone on strike, demanding higher wages, increases funding, smaller class rooms, and more recruitment of teachers and support staff. On March 9, teachers in Indiana rallied at the State Capitol, demanding an increase in wages. After seven days of strike, Oakland’s teachers won an 11% pay raise and progress on issues like class sizes and support-staff ratios. Teachers in West Virginia went to strike on February 21 and persuaded state legislature set aside a controversial bill on education. After two weeks of strike, teachers in Chicago reached an agreement with the charter school authorities. Teachers in Denver and Los Angeles also went on strike and won  pay rise and other gains. Strikes also took place in West Virginia, Oklahoma, Kentucky, Arizona and Washington, among others.