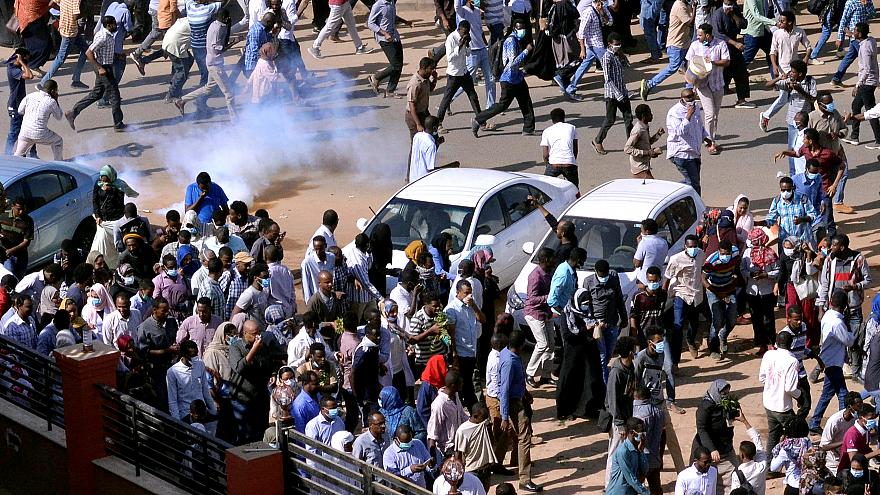 A wave of anti-government demonstrations have been taking place in Sudan since February 22. (Photo: Euronews)

The Sudanese uprising continues to advance with a considerable rise in the number of demonstrations. This is despite the declaration of a state of emergency on February 22, which provided the security forces a freer hand unleash repression, including the use of live ammunition against protesters, baton charges, torture in detention – in the course of which many have died – and mass arrests in an attempt to suppress the demonstrations.

What began as a protest against shortages of essential commodities and rising prices, snowballed into a country-wide uprising with protesters determined to oust president Omar al-Bashir, who has been president for 30 years.

With more and more of his former allies deserting his regime, Bashir imposed the emergency. However, this move has only further intensified the resolve of the protesters.

A crucial role in the broad coalition of forces that are leading the uprising has been played by the Sudanese Communist Party (SCP), a number of whose senior members have been subject to arrests. One such member is the secretary of information bureau, Dr. Fathi Elfad.

The 75-year-old veteran was forced into a car by a group of young masked men while he was on his way to the party office, and driven to the headquarters of the notorious National Intelligence and Security Services. After an interrogation, he was moved to the Shihdi detention center, where he was a prisoner for over a month.

Weeks after his release, People’s Dispatch interviewed him to get a better understanding of the causes, nature and the future course of the uprising.

Peoples Dispatch (PD): It has been widely reported that the Sudanese uprising was triggered by a sharp rise in prices. To what extent has the price rise been a decisive factor? What are the other more systemic grievances mounting among the masses over decades of al-Bashir’s rule?

Fathi Elfad (FE): It is true that to a great extent, what triggered the uprising was the sharp price rise. Incidentally, while I was in detention, I met with a comrade from Atbara, the city where the first demonstration took place. He told me that what sparked that mass protest was the spontaneous slogan raised by a group of workers in the market place when they couldn’t find bread for the second day. They started shouting “bread bread” and all of a sudden, the ten or so protesters turned into hundreds and gradually into thousands.That was December 19. But then, the demonstrations continued for three more days and turned into a mass protest, with a number of marches being held to demand the resignation of the regime. Atbara, the railway city, famous for its working class population, was controlled by the organized masses for three days. Then came the crushing intervention of the security forces. On December 22, the government forces took control again, but by that time, all the northern cities and towns became centers of mass protest actions, demanding the overthrow of the regime. From thereon, the demonstrations became a country-wide event.

I can safely say that the December 19 actions added to the ongoing protest actions which had engulfed the country since January 2018. So, it was no surprise that it spread so swiftly to all the corners of Sudan. By the time the masses took to the streets in the capital on December 25, the mass actions were recorded in over 70 cities and towns.The demands were the same, the downfall of the regime, and the slogan which rang all over the country was and continues to do so: “Freedom, Peace, Justice, the Revolution is the People’s Choice!”

PD: Mass protests have been more or less a persistent phenomenon throughout the almost 30 years of al-Bashir’s rule. What, in your assessment, are the peculiarities of the contemporary political environment in Sudan?

FE: It is difficult to recall a year during the last 20 years which did not witness a number of protest actions against the dictatorial regime. Suffice it to say that the regime is waging war in the three western regions of the country since 2003.The main change in the situation [this time] is the hard work and efforts by the Sudanese Communist Party to build the broadest possible alliance of political parties, armed groups, mass democratic organizations, professional unions, workers’ and peasants’ movements, as well as students’ and women’s unions. This hard work resulted in the establishment, by mid-December, of a national coordinating body which is leading the present struggle.

I may also add that the activities of the opposition political parties, including our party, have helped to organize and mobilize the masses, as well as prepare them for confrontation with the regime. Despite the fact that this alliance is still not that strong – with some differences here and there – it is still holding, especially on the ground level. I think it is a great achievement so far, but much work is needed to maintain and develop this unity of action, especially taking into consideration the attempts by imperialist and reactionary forces, both internal and regional, to abort the revolution and impose a compromise solution that would rescue part of the regime and keep the interests of these forces protected.

PD: More and more reports are emerging about deaths and hospitalization of protesters after being tortured in detention. There have also been reports of doctors and medics being arrested and tortured to death. How widespread is the use of torture by the security forces? What record has the government had with regards to this before the current uprising began?

FE: The use of excessive force and torture has been a common practice of the dictatorial regime since its early days. Following the coup of 1989, the regime established hidden centers known among the opposition as “Ghost Houses”. Thousands of political detainees were tortured in these centers. Over a hundred people were tortured to death. Among those who lost their lives are Dr. Ali Fadl and Abd Almoniem Salaman, both leading cadres of the SCP. Khomeini’s Iran took the lead in training the thugs of the Sudanese Muslim Brotherhood in torture and other techniques to obtain information.

Torture is being used both in interrogation and as a punitive measure to strike terror among young detainees. It is not only directed against doctors and medics but also against all detainees, especially known activists. Till now, three doctors have lost their lives while treating injured demonstrators in the makeshift centers in the streets, while scores of doctors have been beaten for performing their duties in hospitals.The wrath of the regime is directed against the medical staff because of the their traditional role in support of progressive causes.

PD: Apart from the mass arrests and torture by security forces, there are also a large number of reports about masked men attacking protesters. Who are these masked men? What is their method of operation? What is the reason for their existence considering the fact that the security forces have no qualms in using violent force?

FE: This method of using masked men to attack, and shoot to kill, goes back to the September 2013 uprising. During that period, over 200 demonstrators lost their lives. Many court cases are still being pursued, but to no avail. This time, the security forces have learned their lesson – they are trying to cover up their brutal methods. They stage snipers on high buildings from where they can spot and shoot from a distance. The police, as well as the security forces, have denied using live ammunition. But the evidence obtained proves beyond any doubt that security men, masked and dressed in civilian clothes, are the culprit of such crimes. They belong to a special unit within the security apparatus.