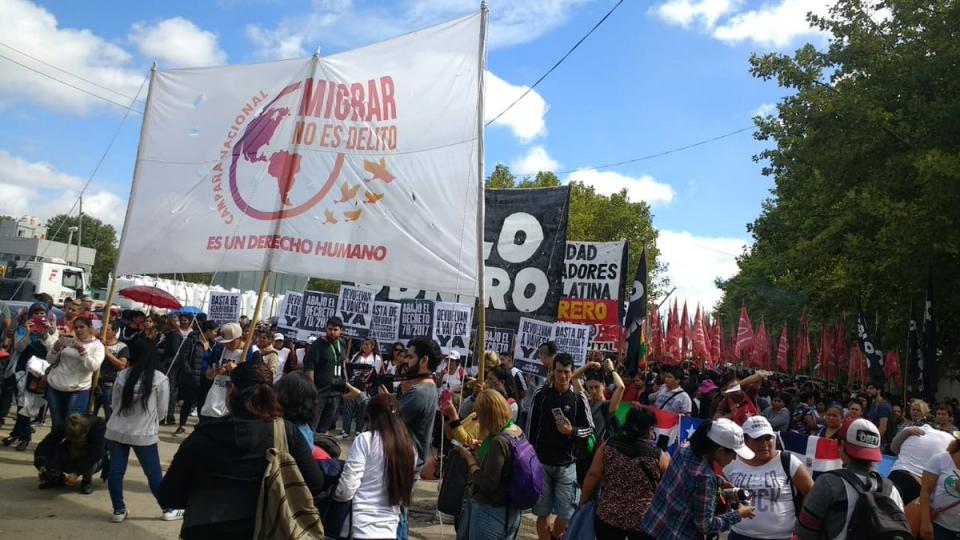 The marches were called by the national campaign “Migrar no es delito” (Migration is not a Crime).

On March 13, hundreds of migrants and members of social and people’s organizations participated in the Migrantazo or a march for the migrants, held in different parts of Buenos Aires and Cordoba, demanding the abolition of Decreto Necesario y Urgente (DNU) 70/2017 [Necessary and Urgent Decree] and recognition of migrants’ contribution to society. The marches were called by the national campaign “Migrar no es delito” [Migration is not a Crime].

In Buenos Aires, people mobilized from the National Migration Directorate to the Plaza de Mayo in rejection of the xenophobia, stigmatization and criminalization of migrants promoted by the right-wing government of Mauricio Macri and its governors. In the city of La Plata, migrants from different countries demonstrated at the intersection of 7th and 50th streets in defense of migrants’ right with slogans such as Migration is a Right, No Human Being is Illegal, Abolition of 70/2017 Decree, No to the Criminalization of Migrants, etc.

The DNU 70/2017 is a decree signed by president Macri in January which regulates strictly the entry and stay of foreigners in Argentine territory. The decree establishes that the National Immigration Office may cancel the residence of any immigrant and order their expulsion if they have been convicted in Argentina or abroad for serious crimes, such as trafficking of arms, drugs, people or organs, but also for other crimes that involve deprivation of liberty, such as street vending or transit infractions.

Through a communiqué, the campaign held president Macri responsible for criminalizing migration and said “He promotes a dirty electoral campaign pointing us as responsible for the crisis, drug trafficking and crime, to cover the economic disaster that they themselves generated, ignoring the contribution of migration to the development of the country.”

The migrants are also demanding the reduction of the migratory procedure rates, withdrawal of new system of distance filing for foreigners (RADEX), an end to arbitrary expulsions and the return of Vanessa Gómez Cuevas, a Peruvian migrant, and her son to the country.

33-year-old Vanessa was living in Argentina but was deported with her 2-year-old son in the first week of February for her criminal record. In 2014, she was released from prison after a four-year term for selling drugs. She undertook training in nursing and was supporting her family of three children. In February, the Buenos Aires police went to her home and took her to the police station under the pretext of getting her to sign some papers. She took her two-year-old son with her but at the station, they were both locked up and were later forced to board a plane to Peru. Her arbitrary expulsion left her other two sons, one aged 5 the other aged 14 stranded.

The march was carried out to remind the government that the right to migration is established as legal in the Argentine National Constitution and is recognized by the international law as a human right.