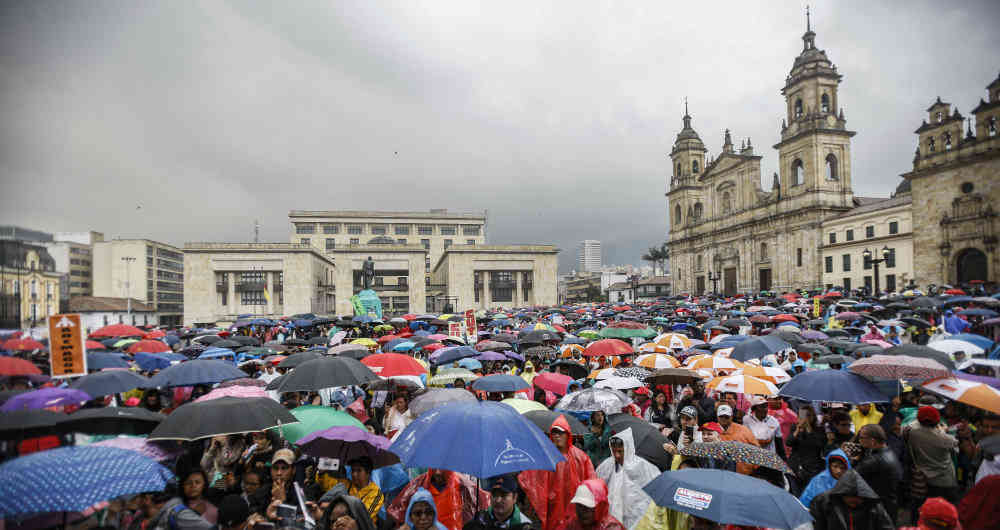 This is the national second strike by the teachers since February.

On March 20, over 35,000 teachers, education workers and students from different parts of the country gathered at the national park and marched to the Plaza de Bolivar in Bogota, Colombia, in defense of public education and in rejection of the government’s National Development Plan (PND). The march, Gran Toma de Bogota [Occupy Bogota], was called by the Colombian Federation of Education Workers (FECODE) within the framework of the 48-hour national teachers strike on March 19 and 20.

The protesters pointed out that the National Development Plan does not take into account the agreements signed between the previous governments and the teachers’ unions. It does not guarantee sufficient financing for school connectivity, transportation, food and free education. Colombian educators are fighting for universal and free access to education at all levels, especially for poor families living in rural areas.

Teachers across Colombia joined the two-day strike and mobilized in different departments of the country. Over 15,000 teachers went on strike in the Tolima department, denouncing the lack of economic support to the education sector of the country, which has caused serious delays in implementation of schemes in several educational institutes across the country. More than 5,000 teachers in the department of Norte de Santander joined the strike, demanding that the national government fulfill the agreements reached with previous governments regarding health care services for teachers and their families. In the department of Caldas also, thousands of teachers stopped working to demand infrastructural and technological development, better meals and transportation. Teachers of around 10 schools joined the strike in the Zipaquira municipality, demanding better working conditions for teachers.

FECODE insisted on building a constitutional reform of the General Participation System to ensure financing for public education. Currently, it maintains a negotiation process with the ministry of education, in order to reach agreements established by the Decree 160 of 2014.

“Public education remains forgotten on the public agenda until teachers go on strike. We will continue fighting with commitment because it is not only our work, teaching is a source of pride,” said the FECODE in a statement.

This was the second teachers’ strike carried out by the FECODE this year. The previous strike was on February 14. The teachers associated with the FECODE across Colombia have also committed to join the national civic strike on April 25 called by several civic, social, labor and political sectors of Colombia against the conservative right-wing government of Ivan Duque.