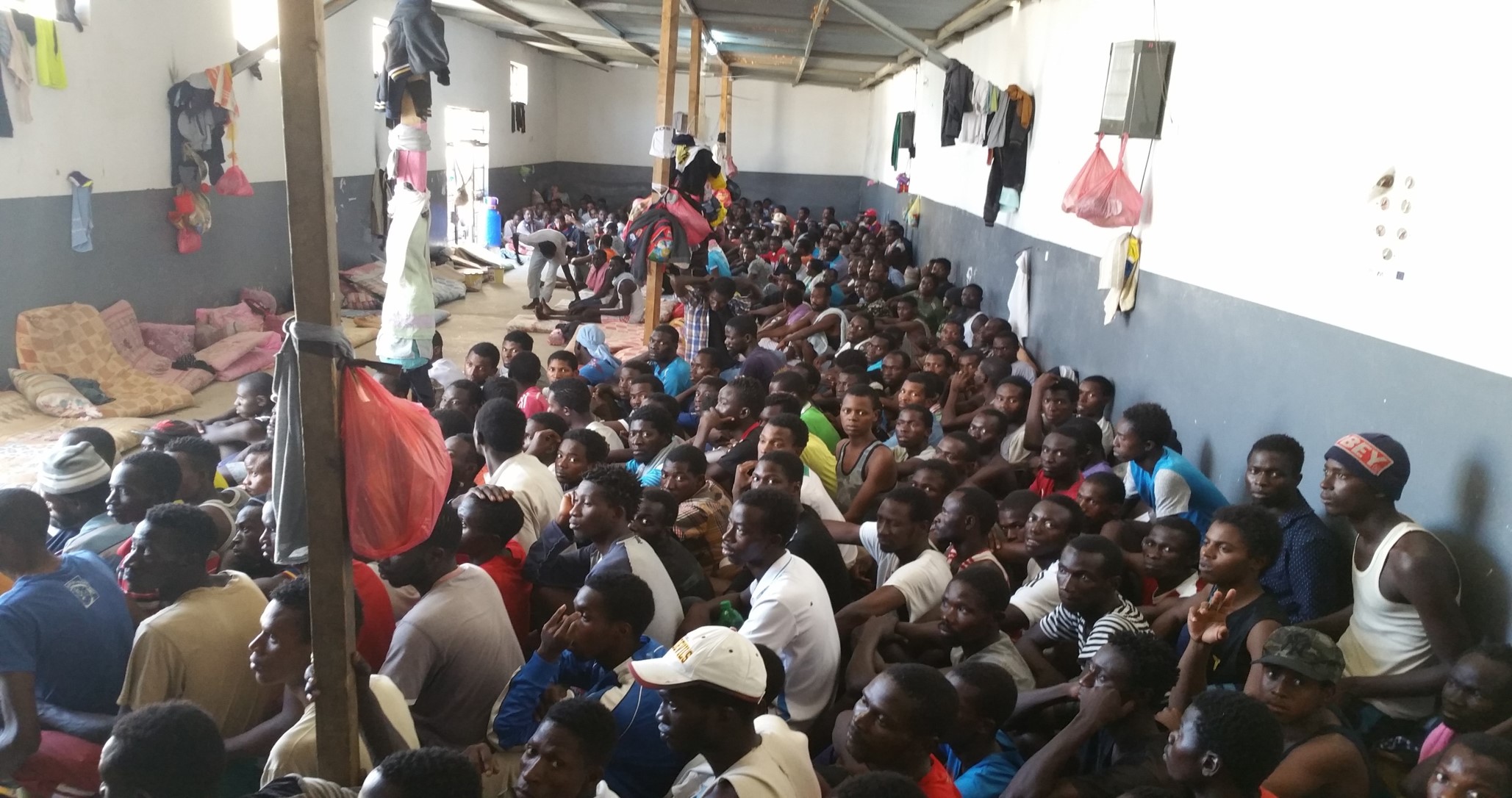 The report has stated that all women and almost all men are likely to have suffered sexual violence, while making their way into Europe (Photo: HPN)

The horrific violence, torture and dehumanization faced by the refugees fleeing to Europe in detention centers in Libya has been documented with disturbing details in a recent report. The document was released by the Women’s Refugee Commission last week. The security personnel are trained and funded in millions by the European Union (EU) to stop the refugees from crossing the Mediterranean.

Titled “More Than One Million Pains”: Sexual Violence Against Men and Boys on the Central Mediterranean Route to Italy, the report is based on extensive interviews with survivors and medical professionals who have treated them. It highlights that forcing male refugees to sodomize each other, castration and other forms of genital torture, raping of female refugees with sticks until they bleed to death are not some sickening aberrations, but widespread and systematic practices in the Libyan detention centers.

Some of these centers are “unofficial”, and are run by militias who control large parts of the country since Gaddafi’s regime was toppled by the US-backed militias. Refugees in these centers are often tortured while on phone or on a Skype call to their families, who are then asked to pay money to have them released.

In the anarchy that has reigned in the country since the killing of Gaddafi, an economy has developed around the kidnapping, smuggling and extortion of refugees. “Transnational criminal networks, local militias, gangs, and terrorist groups extort, exploit, and sell refugees and migrants, with smuggling alone reportedly generating USD 255 to 323 million per year,” the report states.

In one such detention center in the northwestern city of Beni Walid, where a number of refugees had already been extorted to an extent where their families were in no position to pay any more, the guards had decided to exterminate those who could yield them no more money. Many of the men bled to death after suffering genital mutilation and the women were raped until they died.

The plight of those held in the detention centers officially run by the Libyan government’s Ministry of the Interior’s Department for Combating Illegal Immigration (DCIM), to which the EU has committed enormous funds, is not much better. Often, the Libyan official security personnel and the militias running clandestine prisons work in cohorts with each other.

The case of Kehfun, a 21-year-old man fleeing from Cameroon where all of his family were killed in a bomb attack, demonstrated these links. The smuggler he had paid to take him to Libya, from where he had hoped to make the crossing to Europe, sold him to a militia in the southwestern city of Sabha.

“They tortured him with electricity all over his body — head, legs, and genitals. He showed me his body, he had wounds all over him. They were extorting him for 800 euros. He contacted a friend to sell his motorcycle back home and got 400 euros from that, but he was still short,” recalled a healthcare worker who had treated him.

“So, he was sold again,” and this time, he was “put in an official [DCIM] detention center, but kept in a secret cell where he was being extorted for 1,000 euros. He described how they kept people in this cell, which was away from the main prison where the majority of refugees and migrants were held. There was open rape — rape in front of everyone else, against men and women. Men and women died by rape.” The guards even brought in outsiders who often paid to rape men and women.

Many torture centers sport UN logos on the facility

Some of these centers sport the UN logo outside the facility, according to the testimony of a healthcare worker who treated a 19-year-old Nigerian woman, who was intercepted by the Libyan Coast Guards. The EU has asked its member states to not interfere in the operations of the Coast Guards.

The Nigerian woman said she was taken to Zawiyah [a DCIM center], where she saw UN logos each time. The men and the women were tortured, beaten and raped, she said. They were also threatened that if they told anyone in Europe what they endured, their “brothers and sisters in the prison will pay.”

The refugees are so terrified of the Libyan Coast Guards that they often prefer drowning in the sea to being intercepted. One person working in search and rescue operations recalled that when they were approaching a rubber boat in which refugees were adrift on the sea, they “began to drive erratically in an attempt to capsize the rubber boat. They thought we were the Libyan Coast Guard and that we were going to force them back to Libya. [A young man] explained how they had talked about it on the boat and everyone agreed that it is worse to go back to Libya than to die at sea, and they collectively decided to crash into the sea and kill themselves. It took some tense moments for the people to realize we were not there to intercept them, but to rescue them.”

These are the costs paid by migrants for the EU’s ‘Operation Sophia’, through which millions of euros are channeled to train, equip and provide technical assistance to Libyan Coast Guard, who have been tasked by the EU to intercept and return the refugees attempting to cross the Mediterranean.

“The EU has also committed significant financial support to Libya’s Ministry of the Interior to enhance the country’s detention infrastructure and support staff capacity building, despite known DCIM linkages with militias and smugglers. With other European states averse to sharing the responsibility of hosting refugees and migrants, some NGOs allege that Italy is engaging militias in anti-smuggling efforts in Libya,” the report states.

UN special rapporteur on torture, Nils Melzer, said last year, “We’re talking about complicity in crimes against humanity because these people are knowingly being sent back to camps governed by rape, torture and murder.”

However, as far as the EU is concerned, this policy of outsourcing the dirty tasks to Libya and other countries where atrocities committed garner little media attention has been quite successful.

Between August 2017 and July 2018, the number of refugees making it to Europe through Libya declined by 87%, from 172,000 to 30,800. The EU has agreed to “step up its support” for the Libyan Coast Guard in order to eliminate the remaining few thousand refugees who are still managing to enter Europe.

A lawyer, who works with refugees who finally make it to Europe, is quoted in the report to have said that 100% of the women and 98% of the men who have traveled through Libya to make it to Europe have experienced sexual violence. It is a common practice among women setting out on this perilous journey to take contraceptives as a precaution before reaching Libya.

No end to the cycle of violence

The travails of the refugees do not end upon setting foot on European soil. “Sexual violence is not just on the journey, it’s not just in Libya. It’s here, too. They abuse us here. We wake up without a penny in our pocket and the pain of hunger in our stomach. What can we do? We have to sleep with the white people in order to eat,” said one man from Ghana in Italy.

On a hopeful note, the report states, “Despite these grim findings, positive efforts are underway. In select cities in Italy, a handful of local organizations are providing comprehensive, effective care for male and female sexual violence survivors. With sufficient support, some survivors are recovering and can start to rebuild their lives and integrate into their new society. Civil society groups and individuals across the country are volunteering to help refugees and migrants within their communities.”

However, with the EU officially prepared to go to any lengths to stop the refugees from entering Europe in an attempt to please the xenophobia fanned by the increasingly popular right-wing parties across Europe, the attempts by civil society organizations and individuals to help the victims can barely address the scale at which these atrocities are committed.