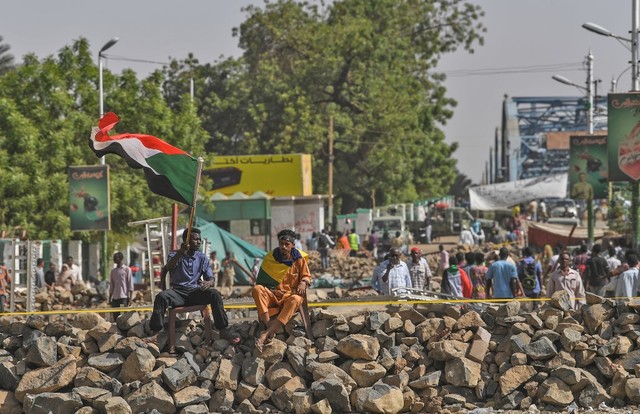 Protesters at a barricade set up outside the army headquarters in Khartoum. Photo: AFP

Hundreds of thousands of Sudanese have arrived in the capital city of Khartoum, demanding civilian rule in the aftermath of the overthrow of Omar al-Bashir, who ruled the country for 30 years. Traveling in buses from different parts of the country, these people have been marching towards the army headquarters to turn the ongoing sit-demonstration into a ‘million-strong’ march.

The protesters are exerting pressure on the Transitional Military Council (TMC), through which the army has been holding power since April 11. The TMC overthrew al-Bashir following months of mass protests in the country.

The number of protesters has increased in response to the threat issued four days ago by general Mohamed Hamdan Daglo. He demanded the clearing of roads, bridges and a railway line around the army HQ and warned the protesters that the army would not tolerate chaos.

Daglo, the vice-president of the TMC, is also the head of the notorious paramilitary force, the Rapid Security Forces (RSF). This force has incorporated the Janjaweed fighters who were used by al-Bashir’s regime to commit genocide in the Darfur region.

The rise in the number of demonstrations and the threats by the general took place even as negotiations between the the TMC and Declaration of Freedom and Change forces (DCFC) reached a deadlock. The DCFC is an umbrella of body of opposition political parties and the Sudanese Professionals Association (SPA).

The two sides had agreed last week to form a joint council of civilians and military personnel to govern the country for the transitional period before elections. However, talks about the exact composition of the council collapsed on Monday.

After the collapse of talks, army personnel in civilian clothes attempted to remove the barricades erected by protesters in from the of the army HQ but failed. These barricades have been carefully built to stop army vehicles and militia loyal to the former president from entering the area. Tens of thousands of protesters are present in the area at any point of time to maintain pressure on the army.

It was this sophisticated level of organization that general Daglo referred to as chaos, when he warned, “After today, there will be no chaotic scenes.” He also expressed his unhappiness at the fact that the protesters were erecting barricades and setting up checkpoints.

Soon after his threat, Sadiq al-Mahdi, the former prime minister of Sudan who was overthrown by Omar al-Bashir in 1989, urged protesters to ease the pressure on the army. “We shouldn’t provoke the army council by trying to deprive them of their legitimacy, by depriving them of their positive role in the revolution,” he said. He added, “We must not challenge them in a way that makes it necessary for them to assert themselves in a different way.” Mahdi heads the largest opposition party, the National Umma Party, which is also a part of the DCFC.

However, the increasing number of people flocking to the sit-in, and the new barricades which have been erected since, seems to indicate that the protesters are more likely to heed the call of the SPA rather than that of a former prime minister who might be looking for power.

It is the SPA – made up of trade unions, students unions, and organizations of doctors, lawyers, teachers and other professionals – which has been playing the primary role in the protests. It has been one of the key players that has forced the army, which was keen on holding power for longer, to yield authority bit by bit.

The pressure on the ground has also forced the African Union to advance its deadline for handing over power to civilian authorities from 90 days to 60 days.