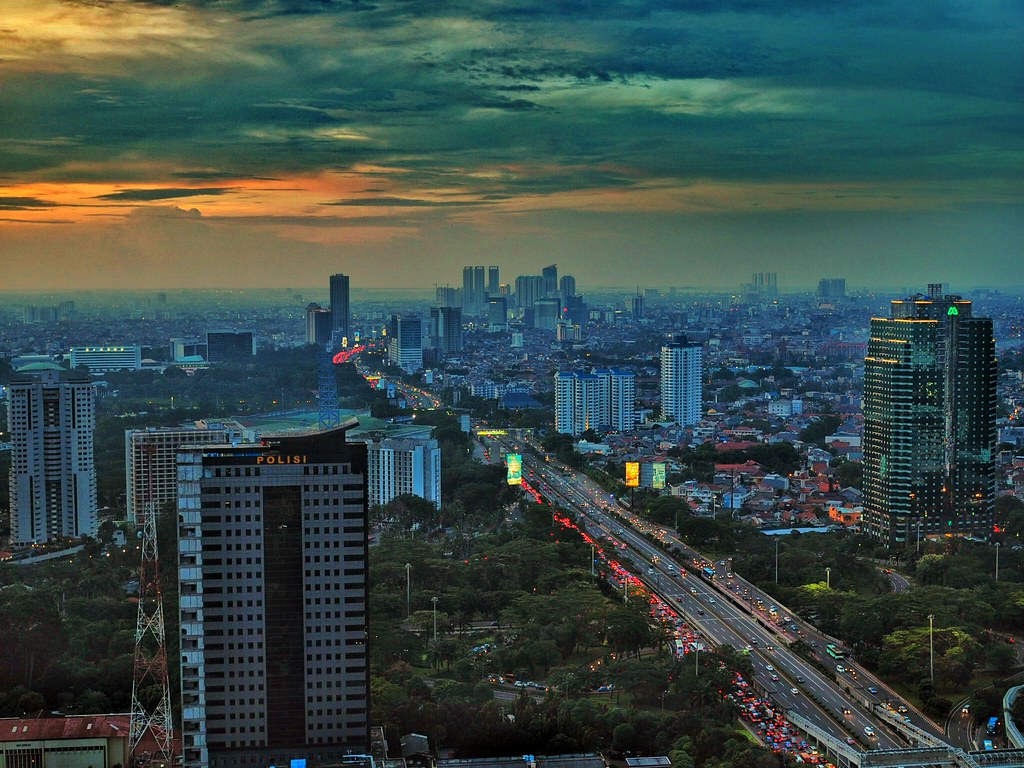 Jakarta, which boasts a population of 10 million, is today the fastest sinking city in the world (Photo: Dino Adyansyah/Flickr)

The capital city of Indonesia is facing an environmental crisis that prompted its planning minister to propose a shift from Jakarta to outside the island of Java. Bambang Brodjonegoro, Indonesia’s Minister of National Development and Planning Board Chief, told Reuters that the administration was considering the eastern side of the archipelago as the destination for the new capital, a project that could take up more than 10 years and would need USD 23-33 billion.

Home to more than 10 million people, Jakarta has become the fastest sinking city in the world. According to the World Economic Forum report, the greater Jakarta has sunk by 13 feet (four meters) over the past three decades. North Jakarta has sunk by 2.5 meters in the last 10 years alone. If it continues at this rate, 95% of North Jakarta would sink by 2050. This would impact huge swathes of thickly populated land mass.

Experts have enumerated two major factors for Jakarta’s sinking — global climate change and mismanagement on the part of the Indonesian government. Situated on the shores of the Java Sea, Jakarta is not left out of the phenomenon of rising sea levels. Global warming has caused the ice sheets to melt their way to the seas and oceans, rising their levels further. The sea water also expands as it warms, directly as a consequence of global warming. NASA has been tracking sea levels since 1993 and it has recorded a rise of around 90 mm since then, with an increase of 3.3 mm per year.

The soil in Jakarta is quite swampy, mostly due to the 13 rivers that flow through it. The city lies in a very low-lying plain — just 8 meters above the sea level and also an alluvial one. The increase in the sea level is thus bound to impact Jakarta.

However, even though Jakarta is surrounded by water, its people do not have access to reliable supply of clean tap water. This inefficiency on the part of the Indonesian government has led to indiscriminate and widespread digging of wells to exploit water from deep ground, especially from the aquifers, which are not regularly refilled by rainfall. This has led to a phenomenon known as subsidence—the sudden sinking of the ground’s surface with little or no horizontal movement. The over-extraction of groundwater causes layers of rock and sediment to settle on top of each other.

Subsidence in Jakarta has become acute because most of its millions of residents end up extracting water through wells that tap shallow underground aquifers. These wells, according to data, fulfill the needs of one third of businesses and industries.

The effect of subsidence has been aggravated even further by the economic activities in recent decades. The city’s traditional low rise buildings are gradually sinking and high rise towers have taken their place. The weight of these constructions collapses the weak ground underneath.

Subsidence is a worldwide phenomenon that is causing many cities to face the prospect of sinking, with Jakarta being the worst affected. The city is sinking at an average of 3 inches (76.2 mm) per year and this outpaces the average yearly sea rise.

Climate change and rising sea levels have threatened several large cities across the world with subsidence. Asian cities are likely to be the worst affected as the terrains of megalopolises like Osaka, Shanghai, Mumbai and Hong Kong are located on coastal islands, reclaimed lands or floodplains.

According to a 2018 report by the Intergovernmental Panel on Climate Change, South and Southeast Asia have been estimated to be far more vulnerable to the rising sea levels because of uneven and unplanned nature of rapid urbanization. This is also the region that houses some of the largest cities and perhaps the most densely populated coasts on the planet. The problems that affect Jakarta are more or less the same as for all these cities. And this has come about with a mere 1.5 degrees Celsius change in temperature.

The Climate Central reported that if the current projections continue, the world might heat up by 3.2 degrees Celsius by the end of the century. This will directly affect over 275 million people across the world, with around four out of five of them more likely to be from Asia. The problem of Jakarta is an alarming development to that end.