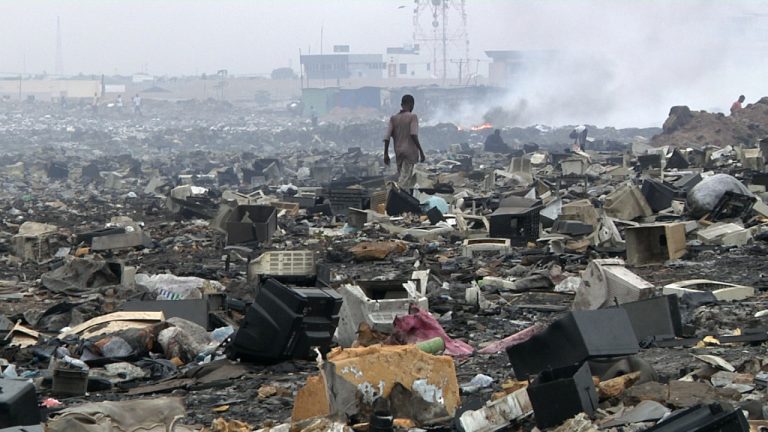 The landfills used for burying electronic waste result in lead seeping into the ground and eventually into the local water supply.

On April 23, Filipino president Rodrigo Duterte threatened to declare war on Canada unless it took back the tons of trash that it had dumped in Manila between 2013 and 2014. The trash primarily consists of Canadian household and electronic waste that was falsely labelled as plastics for recycling. Duterte had given Canada one week to take back the trash, failing which he threatened to return it by force.

In the light of this event, it is necessary to look at the nuts and bolts of the global waste trade. Philippines is by no means the first or the only country to be treated as the dumping ground of the first world. Large portions of the first world’s unprocessed waste end up in the ocean and along the coasts of the third world.

This is also not the first time that Canada has exported its waste to the third world. A study by Basel Action Network (BAN), that involved putting trackers in waste, found that a sizable portion of it ended up in Pakistan and Hong Kong. This dumping is most likely in violation of the Basel Convention which was created to control the export of hazardous waste material from the first world to the third world. In 1995, European countries proposed an amendment to the Basel Convention to completely ban all export of hazardous waste. This amendment was blocked by four countries, including Canada.

The problem begins with the disproportionate waste generation in the first world as a consequence of higher per capita consumption and greater industrial development. To get past the international conventions, the waste is often mislabeled as material for recycling or as donations.

Various types of wastes that are difficult to process are gotten rid of in this manner. The most toxic of these include radioactive waste, electronic waste and incinerator ash. Italian environmental association Legambiente reported in 2001 that there was already 600,000 tons of radioactive waste on the sea floor off the coast of Western Sahara. Massimo Scalia, the chairman of an investigative commission set up by the Italian parliament, reported that the trafficking of radioactive waste into the third world is a USD 7 billion industry in Italy alone. The infamous 1986 Khian Sea waste disposal incident is another example where out of 14,000 ton of incinerator ash, 4,000 was dumped in Haiti after being labelled “top soil fertilizer” and the rest was dumped in the Atlantic and Indian Oceans.

The immediate problems caused by this dumping of waste are the health and safety concerns of the third world workers who process it. These workers often lack the essential equipment that is needed for working with hazardous material and are often found putting their health and lives on the line in order to process the waste.

The ship breaking yard in Chittagong, Bangladesh, is the biggest of its kind in the world, employing over 200,000 people. With almost no health and safety regulations, the workers who break the ships for scrap metal, for USD 1.5 per day, often find themselves at the risk of getting poisoned or falling from high fixtures. According to a local watchdog group Youth Power in Social Action, on an average one worker dies every week.

The lead from electronic waste is another direct threat to human life. The landfills used for burying electronic waste result in lead seeping into the ground and eventually into the local water supply. In Lagos, Nigeria, reports from the World Health Organization and The Lancet have linked several health hazards, such as higher rates of thyroid dysfunctions in women and irreversible damage to the central nervous system of children, to electronic waste dumped there from the first world.

Despite the existence of several international conventions that prohibit the dumping of first world waste, such as the Bamako Convention and the Basel Convention, it has not only continued but also formed a billion dollar global industry that studies have shown is linked to arms trafficking and money laundering.