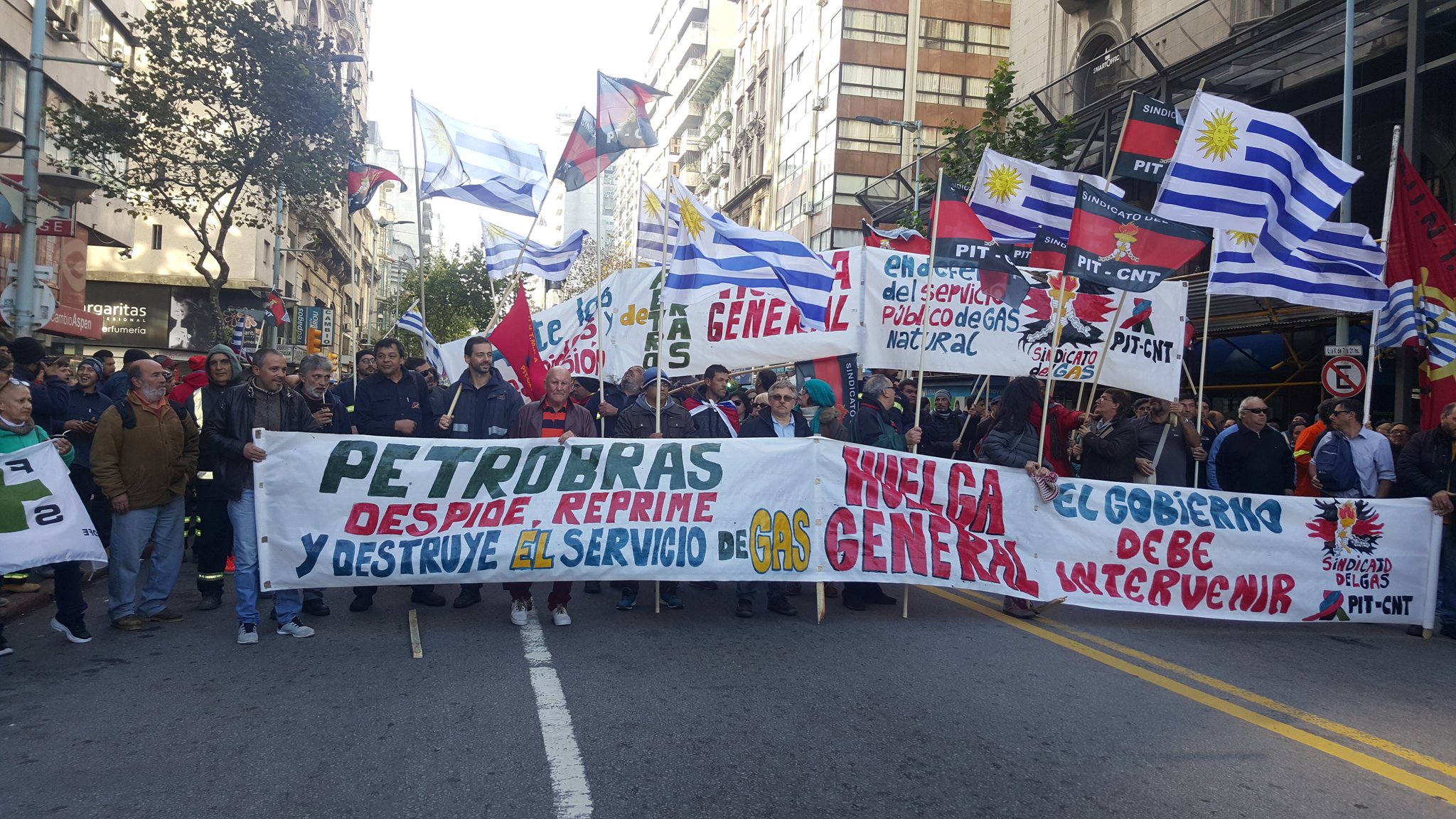 Thousands of workers from different sectors mobilized in Montevideo, Uruguay, in solidarity with the gas workers of the MontevideoGas on May 22. Photo: Twitter

On May 22, thousands of workers from different sectors mobilized in Montevideo, Uruguay, in solidarity with the gas workers of the MontevideoGas, who have been fighting against Petrobras, a Brazilian oil and gas distribution company, since the last week of April.

With the slogan of ‘Petrobras dismisses, represses and destroys gas services. The government must intervene’, the workers marched across the center of Montevideo demanding government intervention against Petrobras, which announced its departure from the country a month ago.

The mobilization was carried out as a part of four-hour partial general strike, between 9:00 am and 1:00 pm, called for by the Plenario Intersindical de Trabajadores – Convención Nacional de Trabajadores (PIT-CNT), a national trade union center in Uruguay.

Since April 30, Maximiliano Camaño and Óscar Castro, gas workers of the MontevideoGas, have been on an indefinite hunger strike in defense of their jobs and the public service of natural gas. The hunger strike was initiated by three workers as a part of the 24-hour gas workers strike called for by the Autonomous Union of Gas Workers and Employees (UAOEGAS), but on May 11, 42-year-old Ernesto Sasías, had to quit the measure due to deterioration of his health.

Alejandro Acosta, the leader of the UAOEGAS declared that an indefinite general strike of gas workers would begin on May 27.

MontevideoGas is owned by Petrobras, a company directly managed by the Brazilian state. Petrobras has been operating in Uruguay since 2004. It is responsible for the distribution of natural gas, manufactured gas and liquefied petroleum gas (LPG) in the capital and other states of the country. It has service stations throughout Uruguayan territory, supplying aviation fuel, maritime products, lubricants and fertilizers.

On April 26, Petrobras announced the sale of the network of PUDSA (Petrobras Uruguay Distribución Sur de America) gas stations in Uruguay and its departure from the country. The company refused to renew the unemployment insurance of over 20 workers and announced that it would dismiss around 40 of its employees in the near future.

While the company claimed that its gas distribution activity in Uruguay was in deficit, the trade union leaders explained that Petrobras wanted to leave the country for a long time and as such it had been cleaning out and divesting. The workers also denounced the company’s systematic deterioration of services. They said that a reduction in the workforce would lead to the loss of quality of services and have repercussions such as withdrawal of services by more users. “When Petrobras got the license there were around 45,000 users and now there are 37,000 users,” they highlighted.

The protesting workers have set up a camp in front of the headquarters of the Ministry of Industry, Energy and Mining to demand the government’s involvement in finding a solution to the problems. The workers are demanding that the government revoke the license to the commercial exploitation of gas granted to Petrobras in 2004.

The conflict between Petrobras and its employees intensified when the company dismissed seven of its workers, on May 9. “We are not going to accept any dismissal,” told Acosta to local Radio Montecarlo. He also said that they want the Executive Branch to take care of the matter and “ensure that during the transition period in which Petrobras leaves (the country), there are no dismissals”.

On May 13, the president and the general secretary of the PIT-CNT met with the representatives of the Petrobras company to discuss about the conflict in MontevideoGas. The leaders of the PIT-CNT requested the company authorities to suspend the dismissals of workers and extend their unemployment insurance, but the company ratified its decision to dismiss seven workers. In response to this, the PIT-CNT gave the call for partial general strike.