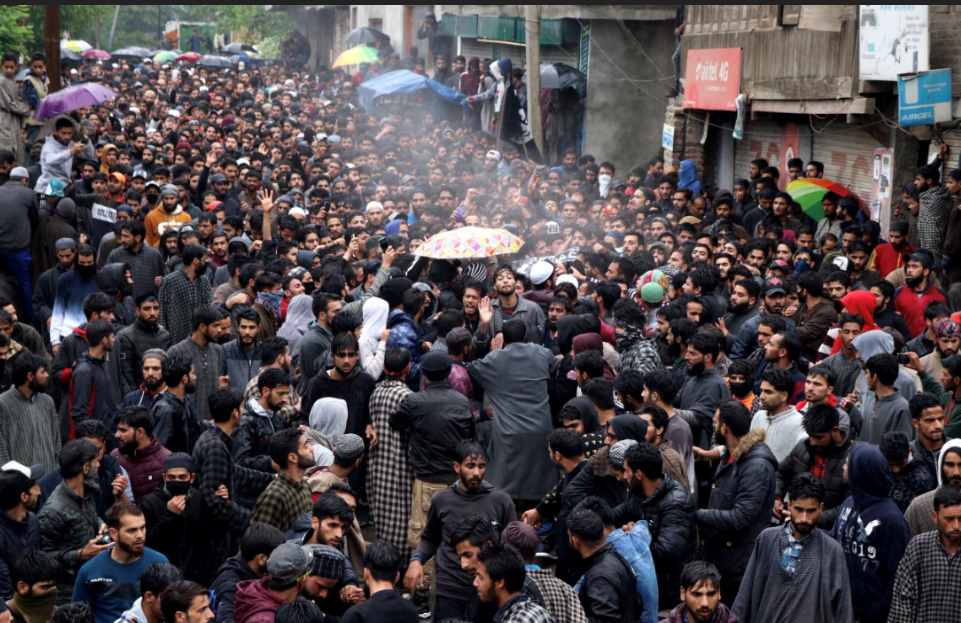 Scores of youth carrying Zakir’s body to a nearby school ground for his funeral prayers. Photograph by Vikar Syer for The Kashmir Walla.

A crackdown has been imposed in the state of Kashmir after a local militant was killed in fierce gunbattle that lasted for several hours. Immediately after, state authorities blocked internet access, imposed a strict curfew and ordered the major schools, colleges and universities to remain shut for two days.

Across the major districts of Kashmir including the city of Srinagar, hundreds of youth seemingly in the state of mourning have taken the streets shouting anti-India slogans and scores of them have taken to pelting stones at the Indian forces. Indian forces have responded to the protests with violent repression, firing rounds of tear gas canisters as well as shooting at protesters with pellet gun.

The militant whose killing sparked the crackdown is Zakir Ahmad Bhat, a 25-year-old engineer who had joined armed ranks in Kashmir in 2013. On May 23 he was cordoned and holed up in Tral’s Noorpora village of south Kashmir. Initially he exchanged firing and refused to surrender but security forces blasted the entire premise of house where he had taken refuge with explosives. His dead body was later given to the family, local reports said, thousands of people turned to participate his funeral despite the heavy rain and security restrictions.

In northern Kashmir, one youth was critically injured after security forces fired tear gas canisters to curb the demonstrators. Irfan Ahmad, was hit in hand he was shifted to Srinagar’s SMHS hospital, witnesses said.

In the Naira area of south Kashmir’s Pulwama district, unidentified gunmen opened fire and killed the brother of active militant Irfan Ahmad. In an audio message that was circulated across the social media, one of the senior militants described this incident unfortunate saying that “government forces are supposed to be blamed for killing civilian Zahoor Ahmad Sheikh, but the mainstream media outlets and the state police are calling them unidentified gunmen which is unfortunate,” militant commander of HeM, Riyaz Naikoo said.

2019 year so far has been described as most violent in the valley, with more than 162 killings reported only in the first three months, out of which 21 were civilians, 58 were militants and 83 Indian armed forces personnel. According to the Jammu Kashmir Coalition Civil Society quarterly report, the spree of violence has been on a higher scale compared to the previous year where 119 deaths were counted in first three months. The report also noted for the first time in 29-years of armed fighting against Indian rule, the killing figures of Indian armed forces personnel in Jammu and Kashmir is higher in ratio as compared to the killings of militants. One of main reason for that was major suicide attack that happened in Pulwama, an attack which almost brought India and Pakistan on the brink of war, wherein 50 Central Reserve Police Force personnel were killed.

No sign of cut in carbon emissions, 2022 set to touch record high