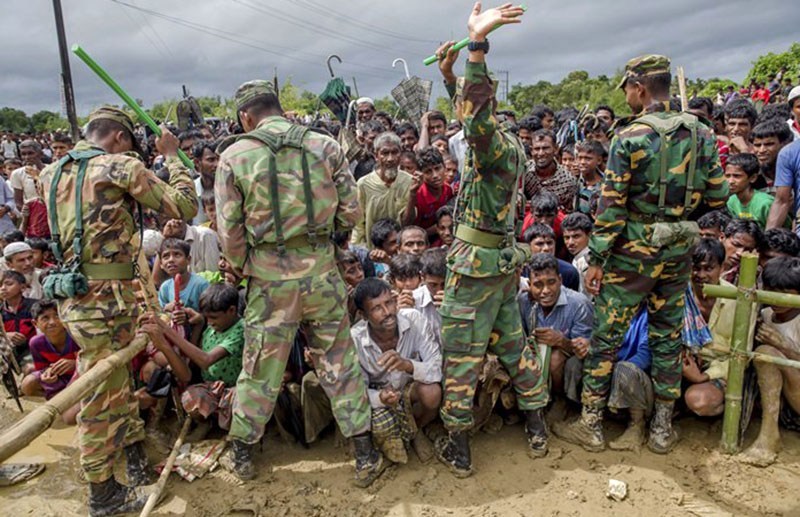 Myanmar military leaders have been accused of “genocide, crimes against humanity and war crimes” against Rohingya Muslims.

Seven Myanmar military personnel who were charged with the killing of 10 Rohingyas in the Inn Din village in Myanmar have been granted an early release. The soldiers were freed in November 2018, serving less than a year of their 10-year prison-term, much less compared to the 511 days that the award-winning journalists who investigated the massacre spent behind bars. The sentence was reduced by the military, which had refused to comment.

The seven soldiers were dismissed from the military in April 2018 and subsequently sentenced for “contributing and participating in murder”. However, activists who saw them inside the prison said that the soldiers were given special treatment, including easy access to cigarettes and beers while the same indulgences were barred for others inside the Sittwe prison.

The gross human rights violations that the Myanmar military has committed on the pretext of national security and counter-insurgency operations has forced over 730,000 Rohingyas to flee the country. Of the forces operating in Rakhine in 2017, only the seven soldiers were punished for the violations.

However, the military has largely maintained secrecy on these arrests and has not disclosed their names or any other details of their roles in the killings.

Meanwhile, burning of houses, looting and mass rapes remained some of the systematic tactics adopted by the forces to terrorize the entire Muslim population living across the western side of the country. “Report of the Independent International Fact-Finding Mission on Myanmar” has verified the crimes against humanity that were committed in the Kachin, Rakhine and Shan States, principally by the armed forces, the Tatmadaw. According to the United Nations Fact Finding Mission, in the Kachin and Shan states, the violations included “murder, imprisonment, enforced disappearance, torture, rape, sexual slavery and other forms of sexual violence, persecution and enslavement”.

Successive Special Rapporteurs on the human rights situation in Myanmar have also maintained that the patterns of human rights violations were widespread and systematic while linking the violations to State and military policy.

In September 2017, 10 Rohingyas were detained by the military, with the help of nearby villagers, on accusations of “terrorism”. Following this, the ten went missing. Reports later confirmed that some of them were hacked with swords by Buddhist villagers and the others were shot by Myanmar troops. Their family members said that they were farmers, high school students and an Islamic teacher. The incident received international attention only after it was exposed by two local journalists working for Reuters in their investigative story.  The journalists, Wa Lone and Kyaw Soe Oo, were arrested and sentenced to seven years in prison.

The story “Massacre in Myanmar: One Grave for 10 Rohingyas” written by the two journalists connected a series of documents pertaining to the massacre and graphically showed how the Rohingya Muslims were bound together using ropes, while they watched their Buddhist neighbors dig a shallow grave for them.