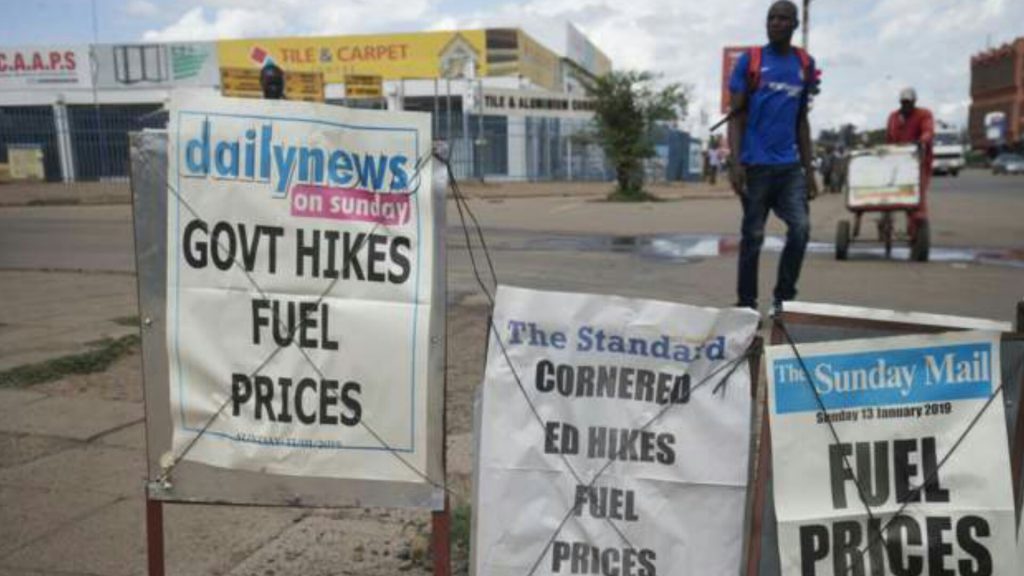 The economic and political crisis in Zimbabwe seems to have reached a tipping point. The sharp price inflation and devaluation of the currency, along with rumors of unrest among junior ranks of the military, has created a tense situation in the country.

In January of this year, while the purchasing power of workers was sharply declining, the fuel price was raised by 150%, causing widespread protests. During the mobilizations, 17 were killed by security forces, and thousands were arrested.

Soon after announcing the price hike on May 21, the government declared a security alert, anticipating a repeat of mass protests. While an uneasy quiet has persisted since, another round of price hikes yesterday has made “the situation.. unbearable”, Ady Mutero, the General Secretary of United Food and Agricultural Workers Union of Zimbabwe (UFAWUZ), told People’s Dispatch.

The current round of fuel price hikes, however, was unlike the previous two. While both the mid-January and May 21st hike were announced by the government, on May 28, at around three in the afternoon, fuel stations started charging around 100% higher than what they were before.

In the meantime, the government was in a cabinet meeting, following which, the Minister of Information publicly denounced the hike, calling it unjustified and assuring the public that it will engage the oil marketing companies to agree on a “fair” price, without specifying what that would be.

However, the “oil marketing companies reacted by limiting or rationing the amount of fuel a motorist can buy to 10 liters per customer as a protest.. probably they are doing this [as a measure] while they wait for the outcome of the price negotiation,” Mutero said. The already long queues at fuel stations are thus getting longer.

“In a way”, he added, this reaction of the oil companies amounts to a “tacit disapproval of the command from the government.”

How did the government lose command over oil companies?

After May 21, around the time the fuel price was increased by 50%, the reserve bank announced that the oil marketing companies will have to exchange RTGS dollars to USD at the market rate during the time of transaction.

Until then, the government had been subsidizing the oil companies by allowing them to exchange RTGS for USD at a 1:1 ratio, regardless of what was the market price. Consequently, the oil marketing companies are now pointing the upward movement of USD vis-a-vis RTGS to justify the hike.

Mutero explained that prior to the coup which replaced Robert Mugabe with Emmerson Mnangagwa (who’d promised to revive the economy), USD was the dominant currency in Zimbabwe. Zimbabwe abandoned its domestic currency in 2009 after inflation spiraled out of control.

In November 2018, a year after Mnangagwa came to power, a surrogate currency called Real Time Gross Settlement (RTGS) dollar – consisting of bond notes and electronic money – was introduced as the main currency through which all salary payments were made.

The RTGS dollar is a quasi currency that was initially pegged at USD on a 1:1 ratio. Very soon though, as the markets began to lose faith in this ratio, the value of RTGS vis-a-vis the USD started to decline sharply.

By the beginning of this year, retailers were charging four times higher if paid in RTGS instead of dollars, even for basic commodities like bread. However, the wages, paid in RTGS, remained stagnant.

Soon, many businesses including pharmacies refused to sell their commodities in RTGS. Many bakers too demanded USD, as RTGS began losing value by the day. After drawing their salaries in RTGS, workers have thus been forced to exchange it at a premium for USD from the black market.

At the same time, the oil marketing companies, most of them owned by private players who are close to the inner circle of the ruling ZANU-PF, were shielded from the crisis. The government continued to allocate dollars to these companies in exchange for RTGS at a 1:1 ratio, regardless of the official market or the black market rates at which ordinary Zimbabwean struggled to get hold of USD.

In order to pay for these kind of subsidies to private players, ordinary Zimbabweans were extorted, for example with the 150% price hike on fuel in mid-January of this year. Through such means, the oil companies continued to be under special protection until this month.

However, the Reserve Bank was ultimately unable to continue with such subsidies any longer, and on May 21 announced that the oil companies had to exchange the RTGS with dollars at the market rate at the time of the transaction. The government then announced a 50% price hike on the same day, perhaps in order to compensate these oil companies.

The 50% hike was not sufficient to make up for the costs imposed due to the stoppage of allocation at 1:1 ratio. Moreover, RTGS value has declined further over the following days, and the oil companies, in order to maintain the value of their products as measured in USD, have hiked their prices in RTGS.

Even the price of a loaf of bread, if paid in USD, remains at one dollar, which is the same as before, Mutero said. But, when paid for in RTGS dollar, a loaf now costs $2.60 more – amounting to an 86% hike. The price-rise crisis has now reached a point where “it is now common that you go to a shop, and within the space of an hour if you return, you find that the prices have gone up again,” Mutero said.

Amidst the fear of a mass-uprising this situation can trigger, rumors of a looming military coup has made the government very anxious.

Citing unnamed “well placed military intelligence sources and long-time serving former cabinet ministers”, Spotlight Zimbabwe, which had correctly predicted the coup against Mugabe which brought Mnangagwa to power, reported on May 24 that a faction of the military is plotting another coup – this time to replace Mnangagwa with the current vice president, Rtd General Constantine Chiwenga. The article further went on to claim that the military, back in November 2018, had asked Mnangagwa to urgently fix the economic crisis as it feared a popular uprising.

This report, which claims that the coup plot is named “Operation Restore Economy”, was given credibility not only by the local media but also by the government. Top aide of Mnangagwa and former deputy minister, Terence Mukupe, warned that military that “You can’t employ the same strategy twice.”

Mutero, however, gives only limited credibility to this report. While acknowledging that the situation is so tense that anything can happen in the country, this “talk of a looming military coup remains a rumour not yet confirmed…But the government, of course, is panicking. Military personnel are no longer allowed to leave or stay out of the barracks”, which, he said, are believed to be running short of food supply. “There is indeed a simmering hostility against the government within the rank-and-file of the military – the junior soldiers.”

Their average earning is no higher than that of an average private sector employee, he said, adding that they too have to stand in long queues, struggle to cater for and feed their families and send their children to school.The ‘2-cent tax’ which is further eroding the purchasing power of the working class has also caused suffering among the junior soldiers.

“At this juncture in our country, everything is very possible, and one cannot rule out a coup,” he said, adding, however, that he doesn’t “foresee the generals doing what they did in 2017 [when they stepped in to replace Mugabe with Mnangagwa]. This time it is likely to be a bottom-up [phenomenon, where agitation by rank-and-file] forces the generals to intervene. If there is going to be a coup, it is going to be a different one this time.”

Should there be a mass agitation accompanied with a general strike, Mutero is confident that the military will take the side of the masses. However, he is suspicious when calls for such actions are given by groups who “substitute themselves for masses”. Anonymous messages have been circulating on social media calling for a violent protest today to demonstrate mass anger. The state continues to remain on high alert.

Earlier, on May 22, a day after the previous fuel hike, a pressure group called Tajamuka “officially declared the national shutdown” in a statement, which added, “This declaration means that nobody should come to work from Monday the 27th of May 2019 to Friday the 31st of May 2019. We have announced this shutdown [in advance] to give you time to buy all the basic necessities you will need during the national shutdown.”

The call for strike was paid no heed. However, Tajamuka, which was active in the anti-Mugabe campaign, is an NGO that is “not worried about the results. What they want to do is to provoke the state machinery and get arrested, and show it as an example of an activity” they undertook, in order to justify its expenditures to its donors, Mutero complained. “At this juncture”, he warned, such organizations will be “exposing themselves as mercenaries”.

Mutero also has little faith in the main opposition party, the Movement for Democratic Change (MDC). This party, he warns, is a neoliberal capitalist party to the right of the ruling ZANU-PF, which wants to implement privatization and austerity measures, that are causing enormous pain under the current regime, with a greater rigor.

A “real struggle” which addresses the root of Zimbabwe’s economic crisis, he said, “has to be organized, coordinated and called for by the workers. By workers, I don’t mean the formally employed only, but also the workers in informal sectors, the unemployed, the community-based organizations and vendors all coming together.” 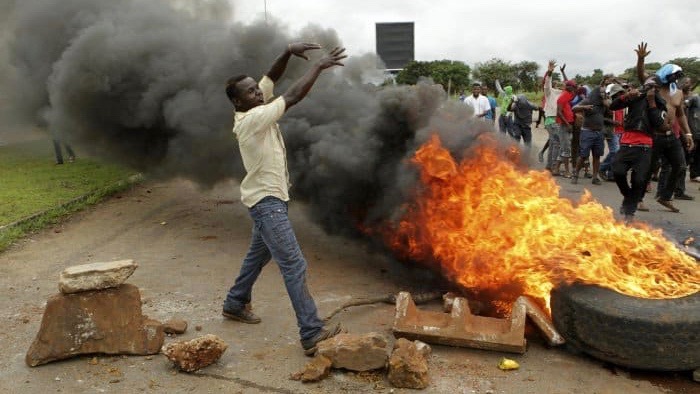