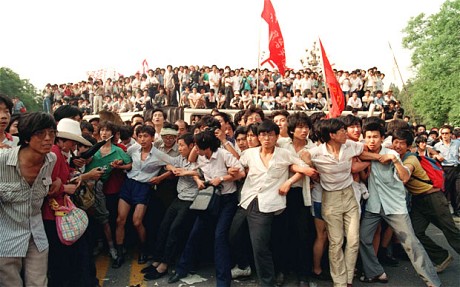 A photo of students forming a chain to block crowds from attacking soldiers. Photo: AP

Last week marked the 30th anniversary of the Tiananmen square protests. The media hullabaloo about it was marked by the typical narratives of freedom struggling against totalitarianism, along with “mourning” the “hundreds probably thousands” of students” massacred on June 4, 1989 by the Chinese army. It has become a ritual to repeat the story every year for the consumption of the global audience. It is amazing to note that at a time where massacres are happening all over the world under the watchful eyes of the western armies, the liberal media’s human rights campaigns are still obsessed with an incident whose dubiousness is established beyond doubt.

Most western accounts claim that on the midnight of June 3, 1989, the People’s Liberation Army moved with full force to Tiananmen square where students were peacefully protesting for democracy and against the authoritarian regime in China. The students were supposedly inspired by the democracies in the west and were heroes standing up to the illiberal communist rule. According to this narrative, the communist leadership under Deng Xiaoping ordered the army to open fire, killing hundreds or thousands of unarmed students at the square. Thus, the Chinese communist party leadership was responsible for the killing and oppression of democratic spirit. Also, in subsequent decades, the Chinese government maintained tight control and hid its own brutality from generations.

The protests in the square had begun in mid-April, mourning the death of communist party leader Hu Yaobang. He was considered a reformist. Some of the students who turned up to pay homage to Yaobang were persuaded by others to stay. Soon this gathering became a protest meeting against what the students termed corruption within the party. The government offered talks, which were refused by the protesters who demanded unspecified reforms. Soon, the protesters were joined by factory workers who were agitated because of the effects of new economic policies on their lives. The policy of market with socialist characteristics had led to some initial hiccups and apprehensions among the workers. Their support to the students’ demands of reform was rooted in those apprehensions. After all the attempts of negotiation failed, the government declared martial law on May 19.

There is no doubt that clashes did occur between protesters, including students, and security forces both at the square and other parts of the city. However, the extent of these clashes, the sections involved and the complexity of the issues have all been buried under the western narrative of a conflict between the students and the state. Over the years, a lot of evidence has emerged to throw doubt on that narrative.

“Through gross provocations, whether by incompetence or design, the authorities preserved a nucleus of defiant young people in the centre of the city, which could justify the assault and the cynical post-facto discovery of a counter-revolutionary conspiracy.” Peter Lee wrote in his blog China Matters on June 4, 2019. He claims to be there at the time of the protest.

What do those lines mean? It literally means the authorities or Chinese government at the time wanted to kill people. That it was creating the ground to satisfy its craving of death. Such gross exaggerations in reality exposes the motivation and the ideological framework of a lot of reports that came out during that time. It is important to remember the context of the Cold War while looking at the incidents of 1989. These were being reported about at the peak of an information war waged by the western powers  – when the socialist block was in in the decline and ‘revolutions’ in the name of democracy were being waged across eastern Europe. The western powers, especially the US and the UK, which had for decades been running regime change operations across the world, saw the opportunity to strike at the heart of the ideology they had sought to overthrow for long. The British control over Hong Kong, US influence over Taiwan and Korea provided important land routes to move in the money and other logistics.

On June 1 2014, the Financial Times carried a report on Operation Yellowbird or the extraction of almost 800 leaders of the Tiananmen demonstration by the British MI 6 and the Americans. Many of them later got prestigious scholarships and Ivy League admissions. One of the leaders, Chai Ling, now living in the US identified the motives behind the demonstration in the report. Though she herself wanted to live, she said “our wish is to see blood; that is to frustrate our government to the extreme that they will eventually butcher their citizens. I believe that only through a river of blood in the Square, will the nation then open their eyes and unite, but how could we tell our fellow students our intention?” This has been quoted partially in the Financial Times report and in full by Kim Peterson in his review of Wei Ling Chua’s book Tiananmen Square Massacre? The Power of Words vs Silent Evidence published in 2014.

In 2011, Wikileaks, the global whistleblower website founded by Julian Assange, published cables sent by US officials based in Beijing at the time of the demonstrations. These cables confirmed that most of the deaths happened in clashes between the demonstrators and the military in different parts of the city and not in the square. The fact that it has been more than 7 years since these cables are in public domain and most of the journalists continue writing about the “massacre” in the Square betrays the real objectives of such reporting.

On June 3 this year, US secretary of state Mike Pompeo issued a statement, saying “the massacre still stirred the conscience “of freedom-loving people around the world”. It is ironic that the country which is responsible for death of hundreds of thousands of people in different parts of the world, which supports the everyday occupation and killing of innocents in Palestine, the country which uses the slogans of democracy and human rights to legitimize the killing of innocents in Iraq, Afghanistan and Yemen has a ‘conscience’ for a ‘massacre.’ Yet again, a skewed version of history is being used to serve current political interests and the pursuit of an imperialist agenda.