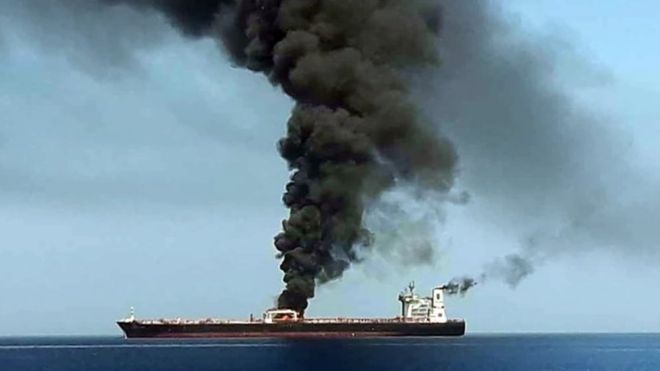 Two tankers, Front Altair (a Marshall Islands vessel carrying naphtha to Taiwan) and Kokuka Courageous (a vessel from panama heading to Singapore) were allegedly attacked in the Gulf of Oman early on Thursday morning. The nature of the ‘attack’ is not clear. Rescue work was undertaken by the Iranians to save the crew members.

The Japanese trade department claimed that both the ships were carrying its cargo. The alleged attacks occurred even as Japanese prime minister Shinzo Abe is on a two day visit to Iran as part of an effort to mediate between Iran and the USA.

The alleged attacks were first mentioned by UK Maritime Trade Operations, a part of the British navy. The US Navy’s fifth fleet claimed have received distress calls from these ships between 6 am and 7 am on Thursday morning.

Islamic Republic News Agency (IRNA) reported that Iranian rescue teams had evacuated 44 crew members from both ships. The crew members were taken to the Iranian port of Jask. Both the ships are afloat and according their owners, there is no immediate danger to the cargo they were carrying.

These alleged attacks come exactly a month after four ships (two from Saudi Arabia, one from the UAE and one from Norway) suffered damage after alleged attacks off UAE’s Fujairah port. John Bolton, the national security advisor to US president Donald Trump, had blamed Iran for those attacks. However, no evidence was offered to prove the claim and Iran had vociferously refuted those claims. It sees such attacks as deliberate acts to justify the US and its regional allies’ policy of aggression towards Iran. Iranian authorities have gone on record saying an incident of this sort may be cited as a justification to launch a war against Iran.

Meanwhile, in his meeting with Shinzo Abe, Iranian supreme leader Ali Khamenei said that while he had no doubt about the former’s goodwill and seriousness, he rejected any negotiations with the US, especially under duress. He said,  “I don’t consider Trump as a person deserving to exchange messages with; I have no response for him and will not answer him.” Further, he said, Iran “has no trust in the US and the previous bitter experience we had in negotiating with the US within #JCPOA will never be repeated again.” He however reiterated Iran opposes nuclear weapons and its religious beliefs prohibit building such weapons.

The attacks may lead to rising tensions in the Persian Gulf region where the situation has deteriorated after the US withdrew from the Joint Comprehensive Plan of Action (JCPOA) or the Iran Nuclear Deal in 2018. The JCPOA was signed by Obama administration in 2015 with Iran, UK, Germany, France, Russia and China in a move to reduce tensions between the US and Iran. After withdrawing from the deal, the Trump administration reimposed economic sanctions to pressurize Iran to renegotiate the deal. The US, along with Saudi Arabia, UAE and Israel, want to curb the rising influence of Iran in the region and accuse it of supporting the Houthis in Yemen, Hezbollah and Hamas, and thus thwarting their plans.

Iran, in retaliation, has threatened to withdraw from the JCPOA and block the Strait of Hormuz through which nearly 20% of global oil trade takes place. The Iranian government wants other signatories of the agreement to proactively persuade the US to save the deal.

Meanwhile, news of the alleged attack on the tankers has led to a rise of $2 in global oil prices.